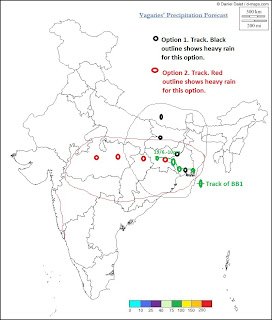 The Depression BB1 is now currently situated at 23.4N and 84.5E, near Ranchi, Jharkhand. Showing a westerly movement in the last 6 hrs, and NW before that. After having poured torrential rains in Bengal and Jharkhand, Jamshedpur and Ranchi both measuring 161 mms, and Darjeeling 101 mms, it is weakening and will continue on its track. Records around the centre (on Sunday) show rainfall of around 50-60 mms in the last 9 hrs.
SE quadrant of the system shows thick bands pf clouds, over Chattisgarh and parts of Vidharbh.
The SWM has now covered Bihar and Jharkhand and Eastern Nepal regions. BB1 movement will push the SWM further into east U.P/M.P. 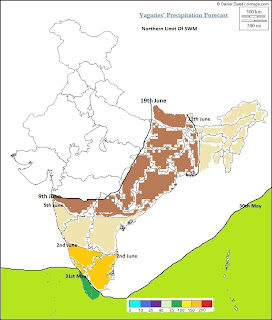 BB1 is slowly and surely getting weaker, and as mentioned, I do not expect it to survive, as an effective system, beyond 2 more days. Once the system weakens, the "bloated " clouding will precipitate some rains into central India (M.P.).
Rainfall pattern will alter in the Indian region.
Heavy precipitation will continue in the Northern M.P./U.P. belt, along with good rainfall in Nepal. A worrying factor is the deficiency in the NE states.
Begining Wednesday, We could see some decrease in rainfall in the Central, Western and Southern regions. Infact, I think the Southern Peninsula may be almost dry and warm. Like wise, I see almost dry conditions in NW India, interior Mah, and Gujarat region. The projected weak MJO will take charge.
NW India, Delhi Gujarat and West M.P. will be deprived of SWM advance this coming week.
With a weakish off shore trough, and no systems or UACs in the next week, rainfall will continue to be weak along west coast.
Mumbai will be hot and humid..very humid. Passing showers might not provide any relief.
Its been a very hot Sunday in the sub-continent. The hottest place was Turbat (Pakistan), at 49c. Incidently, the place had avery low humidity level of 6%.
And the hottest in India seems to be Bikaner and Hissar, at 42c. In the absence of a W.D., west Rajasthan and Sindh (Pakistan) will continue to remain hot, maybe get hotter and reach 50c in the next 2 days.
By Rajesh at June 19, 2011

Just like AS1 models seem to be differing on BB1's path too although they are differing by a much lesser degree as compared to AS1. While most models are showing a W-NW track and weakening by 22nd June somewhere near Central MP, the UKMET seems to have thrown an interesting scenario whereby they seem to suggest that the LOW will first move in the WNW direction to reach Eastern MP and then turn towards the NE direction!! Don't know what could make it do this? A WD?? All in all as Rajesh points out the days of this LOW seem to have been numbered.

1. What is the concept behind wet/dry MOJO?

2. Mumbai this year had best rains in last 10years for month of june - guess due to AS1.