Severe Heat returns to Central Pakistan and .
51.5c , that was the highetst in todayand as PWP points, it is just a degree short of the record 53c recorded last year on May 26th at Mohen Jo Daro.The list of highest in and :
Jacobabad 51.5c, Nawabshah 51c, Larkana ,Sibbi and Sukkar 50c,
And the nights above 30c, Sibbi 32c and Jacobabad 31c,

As NT points out, AS-1 continues to puzzle and baffle forecasters, international forecasters. As is known, this system has "tracked" several differentroutes on the forecaster's models. But where is it actaully going to head, or how much is it going to intensify ? Again, international models have been toying with this system's future for the last 10 days now, and As-1 has been teasing the
"know-alls" by waxing and waning alternatively. 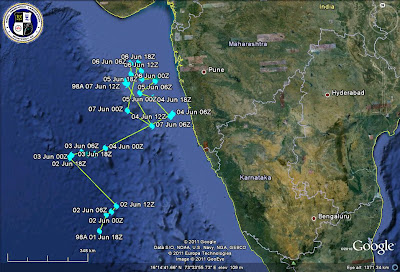 Presently at 18.3N and 70.9E, and with a core pressure at 1002 mb, the winds are notching up to 25 knts. The cloud segment is in the SW and South. The winds have turned to Southerlies now, indicating an intensified low in the west off Mumbai.
Models show a fresh clouding and rainfall enveloping the Mah. coast from Wednesday, their main reasoning being a fresh flow of S/SW winds , laden with moisture.
The low will intensify and move NW. As per present indicators, system will skirt along Saurashtra and the Sindh coast. Peripherial Rainfall will be heavy along the coastal regions of Gujarat from Friday and Saturday, and spreading into Sindh coast from Sunday.Maximum intensification can be off Sindh coast, at around 990 mb.

Thursday: Overnight rains. Overcast cloudy morning, with increasing in rain intensity during day. Frequent showers some with thunder and persistent. Rainfall amount 70 mms. Pockets of very heavy rains in Konkan region, and some places in Konkan can receive upto 150 mms of rain.

AS-1 seems to be finally moving in the Westerly direction. It seems to have moved W-SW in the last 12 hours. The UKMET still continues to show the same path as it has been showing all along, skirting the Mumbai coast and then curving towards Saurashtra. GFS shows it heading into Iran, as things stand currently, one gets the feeling that it will take this track. The next 12 hours should confirm the path this 'guest' will take. Interesttingly no models have anything to do with the UAC formed in NW BOB, it seems it will not result into anything significant.