During the past day, I have received several emails and pictures of a strange cloud feature seen from roughly 4 PM to 5:30 PM on Thursday.  Let me show you.

Theresa Verway took this picture from Shilshoe Beach in Seattle around 4:12 PM 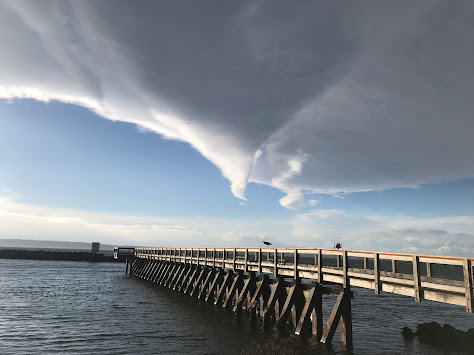 Steve Moseley took this picture in N. Seattle around 5:18 PM 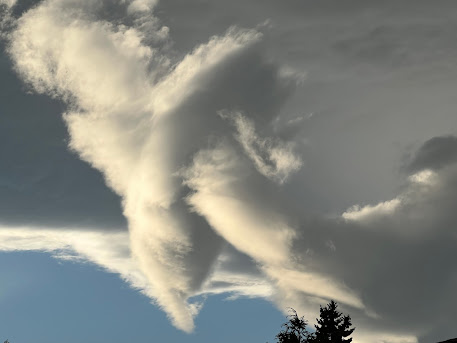 And here are two views from the Seattle PanoCan, one around 4 PM and the other around 5:30 PM.  Note the blue skies nearby....that will be important.

So what caused these strange clouds?
To gain some insight, let's take a look at high-resolution satellite imagery at the same time.....that should provide some major hints!
Here is a high-resolution visible image at 4:30 PM.  For a trained meteorologist the imagery suggests a high-amplitude mountain wave forced by the Olympics. 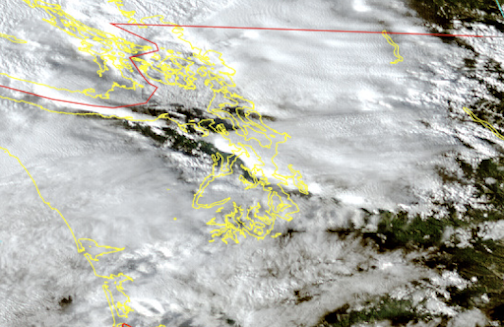 Let me explain, using a marked-up version of the image below.  On Thursday, there were strong southwesterly winds (from the southwest) approaching the Olympics--see red arrow.  As the air rose on the western side of the Olympics, clouds (and precipitation) were enhanced.
But as the air moved down the northeast side of the Olympics it descended, drying the air and producing a clear zone (see blue arrow).
The movement of the air up and over the Olympics established a mountain wave pattern and the air subsequently rose rapidly downstream, forcing an impressive area of clouds (green arrow). 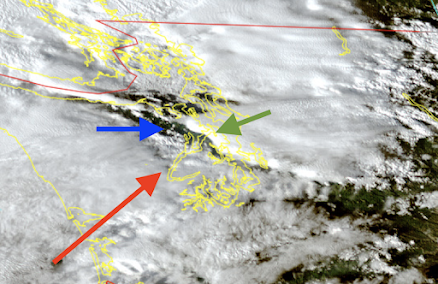 This high-amplitude mountain wave pattern can be simulated by our best forecast models, such as the UW WRF modeling system.  In fact, our model predicted this interesting cloud (see below) 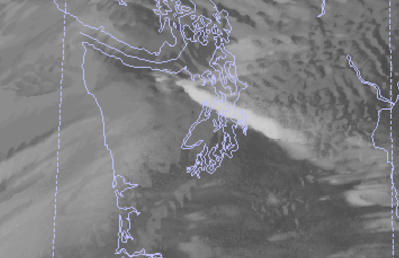 Such high-resolution mountain wave clouds can have very complex structures in three dimensions, and that was certainly the case on Thursday afternoon.  So complex that some folks have mistaken these clouds for UFOs--unidentified flying objects.

In 2010, Russia experienced the most extreme heat wave in more than a century. Temperatures exceeded 100 degrees Fahrenheit throughout the summer, which is exceedingly rare in Russia. The heat wave wreaked havoc on the nation, including destroying a large amount of the country's agricultural stock. Wildfires were also a massive problem, and smoke inhalation was a major factor in the massive death toll. Scientists predict that, as global temperatures rise, northern countries like Russia will be at a far greater risk of heat waves and wildfires than at any other point in recorded history. However, studies indicate the 2010 heat wave itself was likely due to natural variability rather than human-caused climate change. 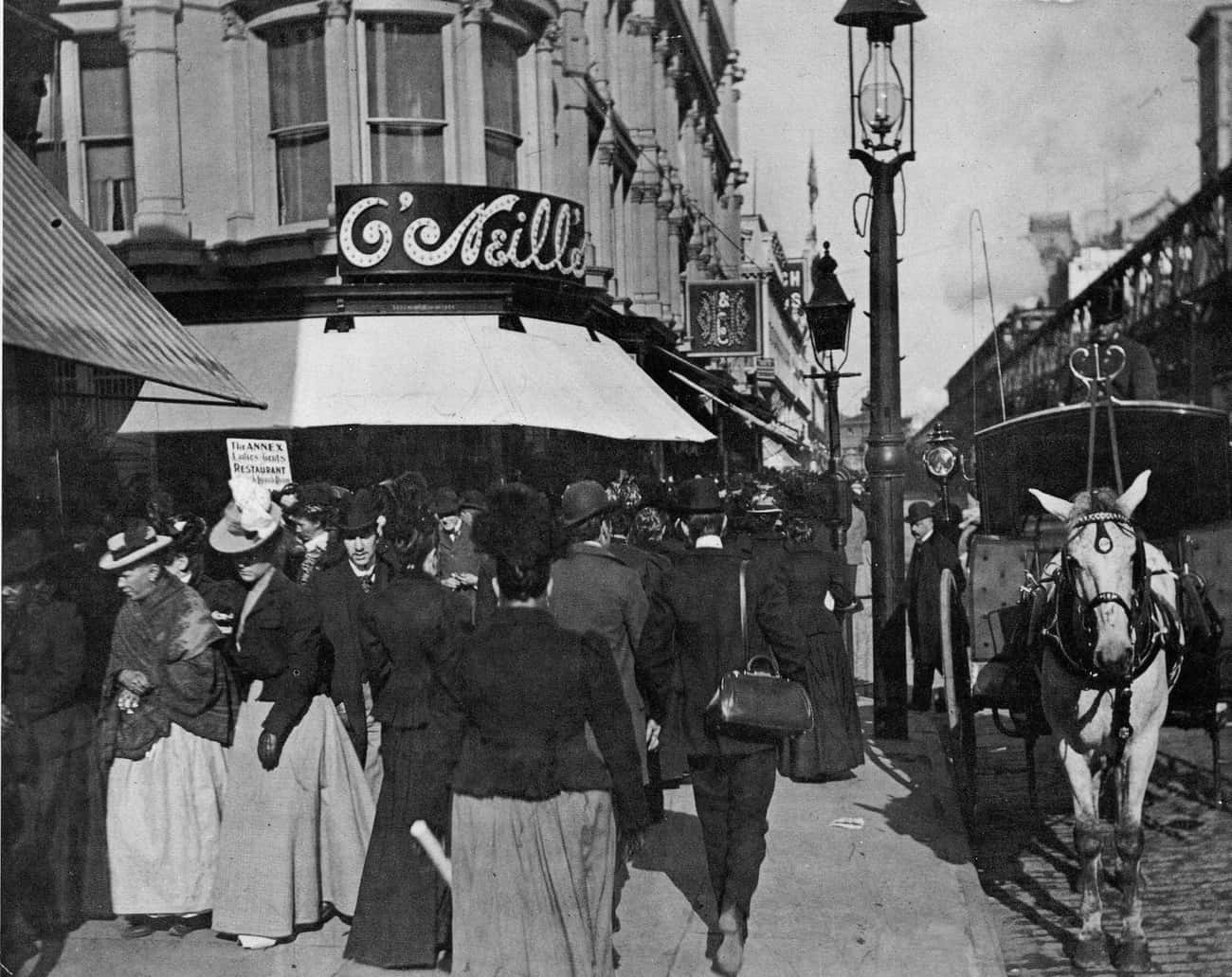 Before the infamous Dust Bowl of the 1930s, this heat wave was considered the deadliest in US history. The entire eastern half of the country was affected, from St. Louis to New York City. Conditions in New York became so hot that the city's horses collapsed and died in massive numbers, with the lives of 250 horses being claimed within a few days. In the aftermath of the two month heat wave, nearly 10,000 people lost their lives. More Americans died during this heat wave than any other in the country's history.

The 1988 North American drought was one of the worst weather disasters in North American history. The drought was prolonged and lasted throughout the summer of 1988 with unseasonably high temperatures breaking out in different places and at different times. This made it extremely difficult to figure out the exact origin of the high heat and low rainfall. Some theories attribute the drought to dense air in the upper atmosphere as well as early effects of climate change.

The drought was marked by weeks on end of temperatures reaching close to 100 degrees. It is unclear how many heat-related deaths could be attributed to the heat wave alone and not other factors, but thousands likely lost their lives due to excessive heat. In addition to the loss of life, power grids shut down frequently, causing outages. 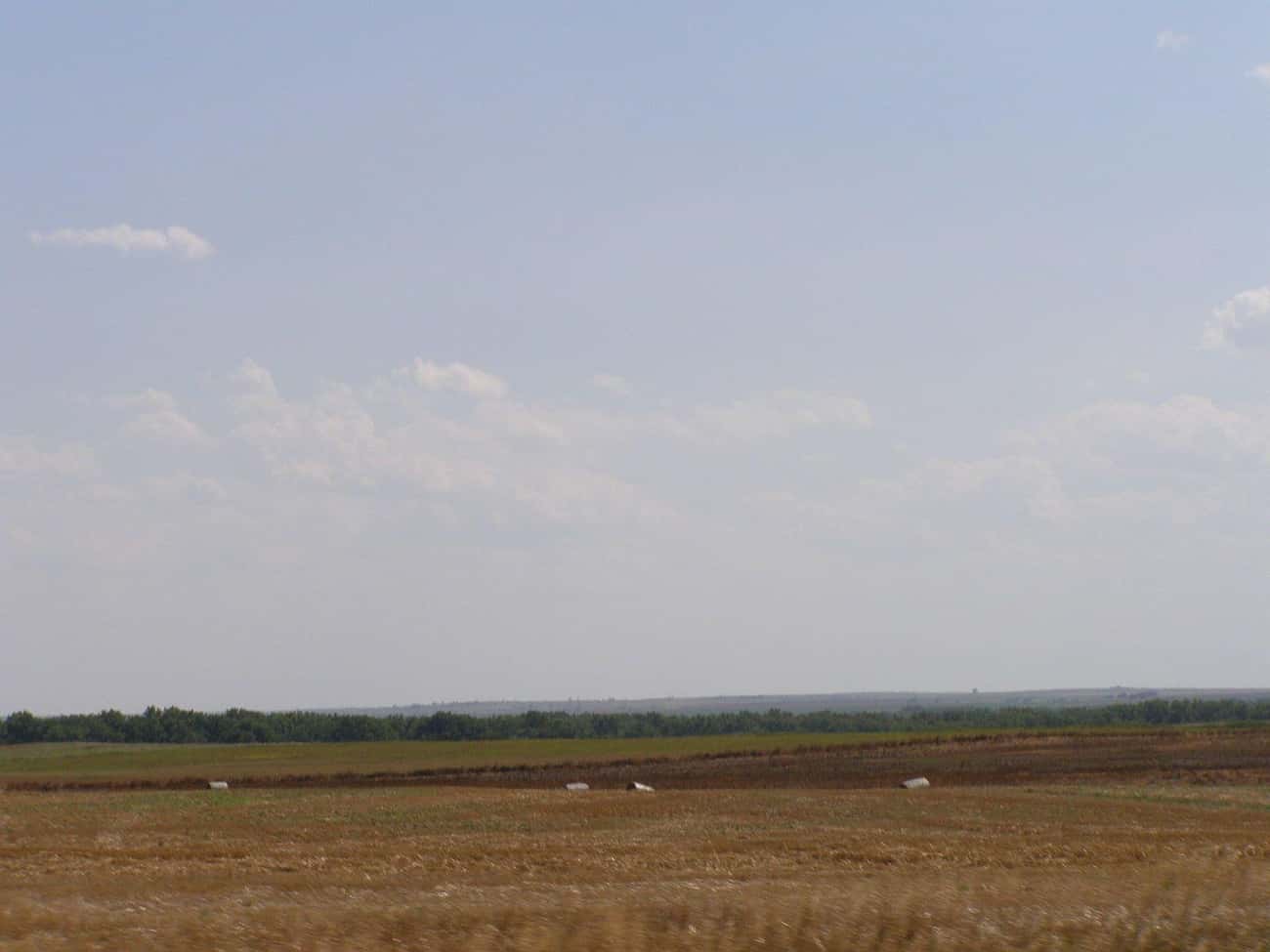 Parts of the South and Midwest were hit with extremely high temperatures throughout the summer of 1980. This massive heat wave was one of the longest on record, and some estimates put the total death count as high as 10,000 people counting indirect deaths. In much of the country, temperatures did not dip below 90 degrees Fahrenheit for months on end. Roughly $20 billion in damages were recorded from agricultural sources affected by the ensuing drought, with livestock deaths also contributing to the financial burden. The heat wave came to an end with the arrival of Hurricane Allen.

Due to the late coming of India's monsoon season, the country was hit by a severe heatwave that left thousands dead. Temperatures got so high that streets in Dehli began to melt, morphing the asphalt and affecting transportation. Indian health authorities urged the population to take extreme precautions during the wave, telling citizens to stay hydrated, wear light clothes, and carry umbrellas to protect from sunburns. The heat wave finally came to an end with the arrival of the first monsoon of the season.

A crippling heat wave smothered much of Pakistan during the height of Ramadan, an Islamic holy period where Muslims refrain from eating or drinking during daylight hours. The city of Karachi was particularly affected, with much of the death toll coming from there and the surrounding areas. The situation became so dangerous religious figures urged worshippers to break their fast if recommended by a doctor for their health. The massive death toll put a strain on the city's mortuaries, who were inundated with more corpses than they could process.

The summer of 1896 was devastating for Americans living on the East Coast, especially those in New York City. During the middle of August, a devastating heatwave struck the city and persisted for 10 days. The heat wave caused thousands of deaths, many of them due to living in overcrowded, dirty tenements that worsened the effects of the high heat. Theodore Roosevelt was a police commissioner in the city at the time, and he wrote about the horrifying conditions he witnessed in the streets. Roosevelt helped provide aid during the disaster and ensured residents had access to commodities like ice.

Over a thousand Greeks lost their lives in the summer of 1987 after a prolonged heat wave scorched the region. It became so hot at times that gravediggers had to acquire ice from local fish markets in order to keep bodies from spoiling before they could be buried. Temperatures in Athens reached 113 degrees Fahrenheit, far above the average summer temperatures in the region. Lack of air conditioning in many Greek hospitals exasperated the death toll, and the elderly were hit particularly hard. The heat wave persisted for over a week before temperatures returned to normal levels.

At least 1,200 deaths were confirmed during India's brutal 2002 heatwave, which lasted for over a month. The biggest impacts were in India's state of Andhra Pradesh, located in the southeast of the country. Over 1,000 victims lost their lives in just two weeks, making it one of the deadliest weeks in the country's history. Winds from India's dry northwest spread across the country, bringing with them exceptionally high temperatures.

Approximately 215 people died on July 15, 1995, making it the worst day of Chicago's heat wave that year. Over 700 lost their lives by the end of the week. Temperatures remained above 90 degrees Fahrenheit for a full week, with several days seeing higher than 100 degree Fahrenheit weather. The high death toll was attributed to a multitude of factors that highlighted just how unprepared the city was for a disaster of this magnitude. Many people brushed off the threat of the heat, believing the severity of the situation to be overblown. The heat wave sparked a revolution in Chicago's disaster preparedness, with city officials hoping to prevent a similar tragedy from ever happening again.

The summer of 2003 was Europe's hottest since 1540, nearly 500 years ago. Tens of thousands succumbed to the heat across multiple nations due to scorching temperatures. France had a particularly high death toll, with estimates putting the dead at around 14,000. Daytime temperatures were punishing, and scarcely cooled even at night. One of the largest killers during the heat wave was stagnant air that accumulated pollutants and other toxins due to lack of circulation. Heat stroke and dehydration were also powerful killers, especially for older citizens.The heat wave cost the continent billions in lost crops and other damages. There is some disagreement as to why this particular heat wave was so devastating, but many experts lay the blame on global climate change.