With Western Disturbance F-5 moving away, we see another Back -to- Back WD coming in approaching our Sub Continent again (F-6) from 25th.
Into Pakistan , F-6 will cover most of the Northern Regions and have precipitations down South till Sindh.
Karachi will get showers and light rains on Monday 25th and Tuesday 26th.

F-6 moves into India on the 26th, with good rains /snow in Kashmir, H.P. and Uttarakhand. Rains likely in the plains of NW India. On 26th, rains with hails, will occur in Punjab, Haryana, North Rajasthan, Delhi, West U.P. and Northern M.P.
Cool NW winds blowing across Saurashtra will bring cooler weather to Gujarat on Tuesday and Wednesday.

New Delhi will get showers , heavy in some parts, upto 10 mms, on Tuesday and some showers on Wednesday. Tuesday/Wednesday days will be cool around 19c. Nights will drop to 7-9c.

Mumbai: Saw the warm weekend with the maximum on Saturday and Sunday at 35c. Likely to start getting to 32c on Monday and pleasantly cool with below 30c temps in the day on Tuesday 26th and Wednesday 27th. Nights around 13-15c on 25th/26th. Windy evenings these two days.

Pune: Again, after a warm Saturday/Sunday recording 36c, Pune will start cooling down from Monday 25th. Tuesday/Wednesday will be cool, with minimum going down to 9-11c.

Another Back to Back Western Disturbance,  F-7, approaches our Region on 28th February ( In North Pakistan) and 1st March into India. 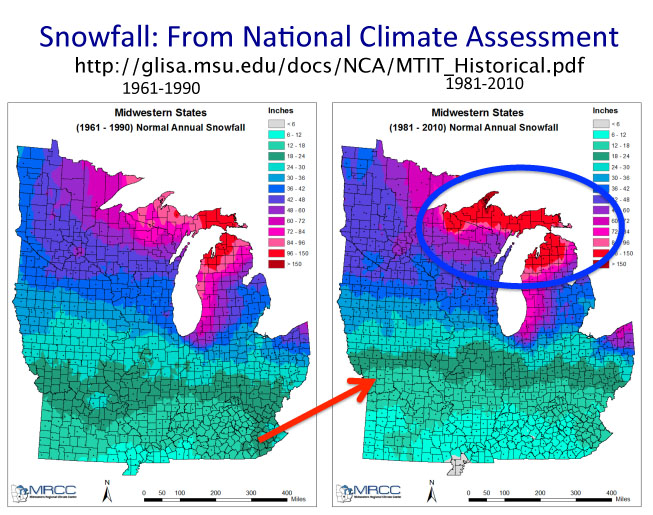 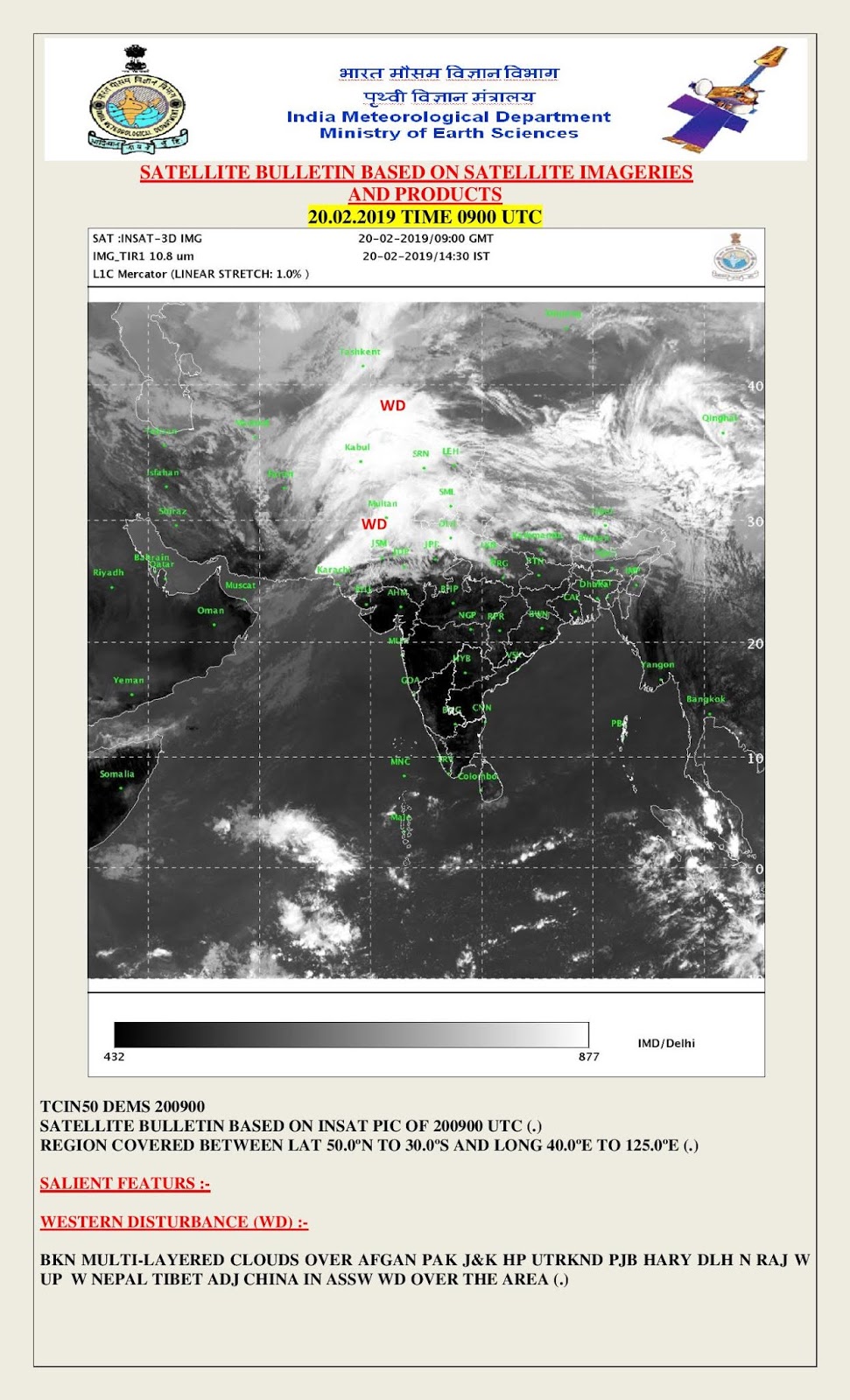 Every day, as the Sun shines on the Earth, it sends ultraviolet rays that can cause sunburn and sometimes damage our DNA. Like a sunscreen for our planet, the ozone layer absorbs most of this harmful radiation and protects us.
But in the early 1980s, scientists discovered that the ozone layer was thinning over Antarctica each August and September.
In 1987, nations around the world came together to fix the problem through the Montreal Protocol. The international treaty banned the production of ozone-depleting chemicals like chloroflurocarbons or CFCs. But these chemicals had been in use for decades, and they stay in the atmosphere for a long time so it took a while to see the effects of the ban.
In 2000, the ozone hole was the largest ever observed by scientists.
But conditions slowly improved. Data from NASA and several partners showed a 20 percent decrease in ozone depletion during August/September from 2005 to 2016.

In 2017, the hole was the smallest since 1988. A year later, the hole was smaller than expected. Studies suggest that the ozone layer over Antarctica should mostly recover by the middle of the 21st century.
NASA Earth Observatory

Mumbai: Pleasant spell to subside..Gradual increase in warmth next 3 days.
Pune/Aurangabad: Gradual heat up leading to 35c by Mid week. Wait for weekend ! 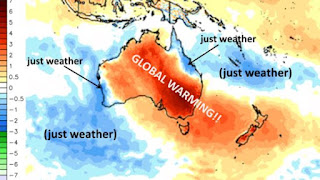 Jabalpur gets showers on Friday 15th. Temperatures showing a fall after that on Sat/Sunday.
Nagpur gets light rains to showers on Friday.
Temperatures drop in North/NW and Central India on Saturday/Sunday.
West also sees a fall in temperatures on the weekend.
New Delhi will get showers or thunder showers on Thursday and Friday. Cooling the days. Around 15-30 mms expected in 2 days.

F-3 will be appearing around 18th over Pakistan, with rainfall possible in Sindh from it.
F-3 approaches India on 18th/19th with more rains in the North.

Mumbai: Wednesday Thursday will be warm at 34/35c with nights around 20c at Scruz. Gradual cooling from Friday 15th, with the days cooling down to below 29c and nights may register 15/16c at Scruz.

Pune: Warm on Wednesday and Thursday. Cooling from Friday with weekend touching 9/10c.
By rajesh at February 13, 2019 3 comments:

If the Polar Vortex is due to Global Warming, Why are U.S. Cold Waves Decreasing?


It’s much easier to devise and promote a climate change theory than it is to falsify it. Falsification requires a lot of data over a long period of time, something we don’t usually have in climate research.
The “polar vortex” is the deep cyclonic flow around a cold air mass generally covering the Arctic, Canada, and Northern Asia during winter. It is irregularly shaped, following the far-northern land masses, unlike it’s stratospheric cousin, which is often quite symmetric and centered on the North and South Poles.
For as long as we have had weather records (extending back into the 1800s), lobes of cold air rotating generally from west to east around the polar vortex sometimes extend down into the U.S. causing wild winter weather and general unpleasantness.
We used to call this process “weather”. Now it’s called “climate change”.

When these cold air outbreaks continued to menace the United States even as global warming has caused global average temperatures to creep upward, an explanation had to be found. After all, snow was supposed to be a thing of the past by now.

In other words, as the theory goes, global warming sometimes causes colder winters. This is what makes global warming theory so marvelously adaptable — it can explain anything.
In the wake of the current cold wave, John Christy skated into my office this morning with a plot of U.S. winter cold waves since the late 1800s. He grouped the results by region, and examined cold waves lasting a minimum of 2 days at a station, and 5 days at a station. The results were basically the same.
As can be seen in the plot below, there is no evidence in the data supporting the claim that decreasing Arctic sea ice in recent decades is causing more frequent displacement of cold winter air masses into the eastern U.S., at least through the winter of 2017-18: 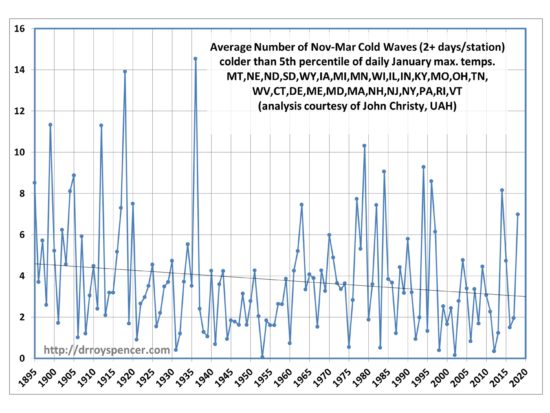 The trend is markedly downward in the most recent 40 years (since 1979) which is the earliest we have reliable measurements of Arctic sea ice from satellite microwave radiometers (my specialty).
Now, I suppose that Arctic sea ice decline could have some influence. But weather is immensely complex. Cause and effect is often difficult to ascertain.
At a minimum we should demand good observational support for any specific claim.
In this case I would say that the connection between Eastern U.S. cold waves and Arctic sea ice is speculative, at best.
Just like most theories of climate change.
By rajesh at February 10, 2019 1 comment:


Also was lowest temp of season in parts of North Kokan & Madhya MH region in Maharashtra.


Some temp info in map format: 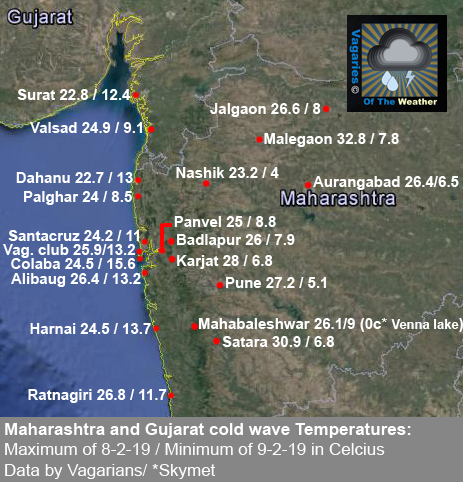 Above map prepared by Tejas & Data input by Abhijit

Above info compiled by Vagarian Shivkumar

Posted Friday 8th Morning:
Mumbai:
Friday expected to be cool around 25/26c in the day. Saturday morning cold at around 12/13c. Day a couple of degrees higher at 28c. Sunday , again a bit warmer around 28/29c.
Monday /Tuesday/Wednesday warm at around 33/34c, and nights rising to 19/20c.

Posted Wednesday 6th Morning:
Mumbai can expect cooler days and nights till Saturday. Pleasant weather from 7th-9th with temperature range between 27/28c and 13/14c at Scruz.
So, a pleasant period from Wednesday....

The February Western Disturbance, F-1, is approaching.Will bring precipitation rain/snow in Upper Pakistan on 4th/5th, with some rainfall in upper Sindh regions.

On 6th, F-1 moves into India via the Western Himalayan route. The intense W.D. will bring heavy amounts of rain/snow in Kashmir, H.P. and Uttarakhand on 6th and 7th, while actually commencing from 5th February.
Induced Low and subsequent wind confluence will result in
Rain, thunder  and hail  also in Punjab, Haryana, Delhi and North Rajasthan and  U.P. on Wednesday 6th and Thursday 7th. With sharp drop in day temperatures.
Parts of Northern M.P. (Jabalpur- drop in day temperatures) will get light to medium rains on 7th.
Light rain expected in Vidharbh on 7th Thursday (Nagpur).

Mumbai:
Warm and partly cloudy on Monday. Monday/Tuesday days likely to be around 32/33c, with lows at 19/20c.
From Wednesday 6th, Mumbai can expect cooler days and nights till Saturday. Pleasant weather from 7th-9th with temperature range between 27/28c and 13/14c at Scruz.
So, a  pleasant period from Wednesday....

Warm on Monday 4th and Tuesday 5th, with partly cloudy skies and a bit more humid. Days around 32c.
But, better from Wednesday thru Saturday, with days dropping to 26/27c and nights to 8/9c on Wednesday and Thursday.