Northern Pakistan Rain Likely:
Strong moisture laden easterlies are prevailing North of the monsoon trough. Originating from the Bay, they are pushing thru North M.P. and adjoining U.P. into H.P. and finally into thru Northern Punjab into the Northern regions of Pakistan. In Northern Pakistan, these winds are interacting with J2.
Northern cities in Pakistan, including Islamabad have received heavy rainfall. Islamabad measured 59 mms while adjoining rawalpindi got 68 mms. Several cities in pakistan Punjab got between 30-70 mms.
More details can be found on PWP with rainfall amounts in Pakistan.
This inflow can continue for another day, as the axis remains stationary till Thursday. On this line moving North, rainfall could abate. Another day could cause flooding if rainfall exceeds 75 mms in places.
By Rajesh at June 29, 2011

The Mumbai Doppler 'Plan position Indicator - Close range' is stuck at the same image that was there yesterday around the time Rajesh mentioned about heavy thunderstorm in South Mumbai. Only the date seems to have changed by the IMD. Hope these guys learn how to use the Radar quickly. 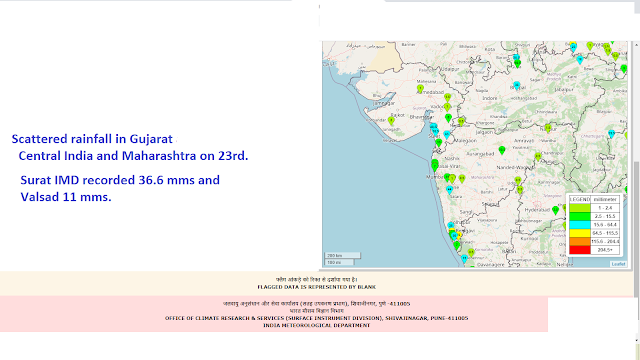