It was 51c on Wednesday in Larkana, Jacobabad and Sibbi, and 50c in Turbat (all ).

The exact position of AS-1:

AS-1,as a system is now deepened into a well marked low pressure, as per IMD terms. The cloud bands are getting better organised, and are distinct in the SW and West quadrant. It is to be understood, that the system has very minimal clouding in the east of its centre (read Indian coast). It is now located at 10 pm IST at 18.9N and 70.1E, which is 320 kms S/SW of Mumbai.

Now, this system was barely 55 kms from Mumbai when Vagaries reported 2 days ago. So having moved almost 265 kms AWAY from the Indian Coast, but strengthened to some extent. 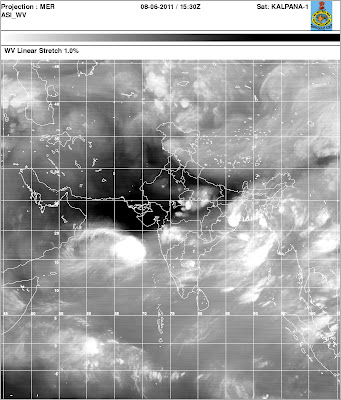 The latest water vapour sat imagery shows the region above 20N as very dry, due to dry winds from the NW. The current heat wave in the Sindh, Rajasthan and Kutch regions has significantly altered the "joy ride" of this system.

With clear indications of cirrus clouds also going westwards from the system, AS-1 is now destined to travel west/north-west, (remember the zig-zag travel map put up yesterday??) and deepen a bit more.

Since I would expect it to move further away from the Indian coast, the system as a depression maybe, would skirt the Saurashtra coast and the Sindh coast of Pakistan. Precipitation would be in moderation along the Mah. or Gujarat coasts. And seeing the clouds segment in the western periphery, we could assume no meaningfull effect on Indian shores.

The same WV sat. image also indicates the stagnant SWM stuck at 18N since 5th June. Vagaries had expressed a delay in the SWM progress after 20N. And the current OLR is not favourable for SWM to move beyond 18N. (Vagaries maintians 18N, south of Mumbai, though IMD mentions the northern limit at Dahanu).

Seems a few more days waiting now, if the system is moving away.An active MJO should not make this wait long.

Meanwhile, the UAC mentioned in the Flash Snippet, is a low pressure area now, nomenclature BOB-1. It is situated off the Orissa coast at 19N. BOB-1 will initiate and push up the SWM in the eastern sector. SWM should cover A.P. and Orissa and NE states, including parts og W.Bengal.

A step towards Nepal.

Konkan region will get pockets of heavy rainfall.

Please rethink the nomenclature for Bay of Bengal systems. IMD uses BOB for Depression in the Bay and has already used BOB1 in February 2011. Vagaries is using AS for Arabian Sea, IMD uses ARB. They both are different so no confusion between the two, but for Bay Vagaries has BOB just like IMD, so spope for confusion. Vagaries can use BB for Bay !!