I want to stress on the unusually hot weather prevailing in the northern plains of India, central India, Western region and down to the states of Maharashtra/North Karnatak. Save the southern region, this anomoly map of last week shows the extent of the spread of the abnormally hot weather.

Again, Mumbai yesterday shot up to 37.1c, second hottest January ever, the hottest being just a shade higher at 37.4c. Only a 0.3c, difference, that can hardly noticeable unless you carry a digital thermometer with you.
The days temperature departure from the normal on the 25th. was really very high in the

central regions as seen here in the IMD map.

The actual readings are seen in the map here. The 37c in the centre is at Akola (Mahara

shtra) and is +6c. Again, this was the highest reading in Asia for the 25th.
Like mentioned before, the passing of the W.D. is the only hope for a drop in temperatures in the next few days, and for a real end to this "Summer in Winter".
kapadias@gmail.com

W.D's come and go, but the plains of India this year have not really experienced too much of any 'cold wave" or severe "cold spell". True, temperatures have been around normal for most of Jan. but the real severe winter has been absent. In the IMD map of day temperature , the major part of the country, in the above 30c range. The northern areas is also high at around 25c range. But the west coast is the warmest !

Now for some exteremes ! Mumbai again ! The highest day tempereture in Mumbai Colaba on 23rd. was 36.3c and Santa Cruz was 36.4c. This was the The highest temperature in Asia tod

ay along with Ratnagiri, also at 36c.( Maybe highest even in the entire northern hemisphere). The IMD streamline map shows the reason for the high heat. The strong off-shore east winds blowing into the region.

Mumbaites and all of Maharashtra will have to "forego" a winter this year ! Look at the diagram of the Pune (Maharashtra) temperatures of the last 30 days. It speaks for itself !

Only hope now is the approaching W.D. Expected to precipitate rain in the northern hills on 24th./25th., one can hope for some drop in temperatures in the central and western regions from the 26th. (Hope I am not wrong this time).

An approaching easterly wave is expected to bring some rather heavy rain to T.N. and the interiors of the state and Kerala on the 25th./26th.

Meanwhile, the ITCZ is firmly "jammed " in the southern hemisphere now. With 2/3 cyclone firmly embedded in it, it is producing good rains along the Australian coasts and the southern coast of Africa, near Mozambique.

Europe, that is the continent region, is again due for another battering. A deep area of low pressure currently out in the Atlantic is moving east into the southern Bay of Biscay where it is expected to deepen further before hitting northern Spain and southwest France early this weekend. Severe gale force winds with force gusts are expected across northern and northwestern Spain late on Friday and into Saturday. Heavy rain will accompany the winds with snow falling across the Cantabrian Mountains and the Pyrenees.The storm is then set to track quickly eastwards across southern France and into northern Italy, where it is expected produce further strong winds and some very heavy snowfall over the Alps. Wow ! another extreme !
kapadias@gmail.com

Himalayan States of North India have experienced the brunt of the recent W.D. with heavy snow on the mountains and rains in the plains. Precipitations was recorded in Punjab, Haryana Rajasthan and Uttaranchal.Today,18th, Leh recorded a high of -2c and a low of -10c and Kargil a high of -4c and -13c as the low.
But , as of today, the scene is different elsewhere in the country.Minimum temperatures are above normal by 5-9° C over most parts of Rajasthan, west Madhya Pradesh and by 3-5°C over plains of northwest India and east Madhya Pradesh.
Highs of 35c and 36c were recorded on the 17th./18th. along the west coa

st and Mumbai had 35c as the high on the 17th. (map).
Mumbaites recall last year's lows of 8.5c at S'Cruz,and 11.8c at Colaba,and are anxiously waiting for a drop in temperatures this winter.Well, nothing of the sort is foreseen this year.
Shiraz, from Mahableshwar informs of a very mild winter in the hill station, with the minimum temperatures not sliding below 13c this year. He remembers the frost and freezing conditions of last year. Shiraz, I do not see that drop this year !!
In fact, from the IMD table chart in the weekly weather report, if we see Maharshtra 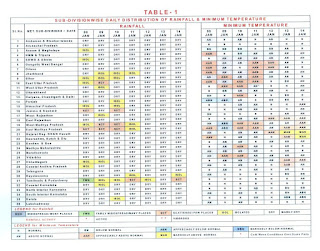 readings ( S.No. 23,24,25,26) , weekly minimum temperatures are observed to be above normal to "appreciably above normal" on most days.
The temperatures could now fall, as the W.D. is moving away, and the cold air and clear skies in the rear of the system is moving eastwards.
A weak easterly wave could bring some rain to the south TN coast on the 19th./20th.
kapadias@gmail.com

Temperatures have gone up all over the region in the last 4/5 days. The IMD map shows the deviation of night temperatures to be above normal all over the region. They have gone up by 2/4c in the northern areas and 4/6c in the central regions of India.
The nip in Mumbai's air seems to be also waning slowly, since the temperature shot up by 3c on Saturday/Sunday (11/12th.). In Colaba, minium 20.5 Celsius temperature was recorded while in Santacruz the minimum temperature was 17.2 degree Celsius. According to IMD , the rise in temperature is due to to a wind circulation in south Gujarat. This caused cloud formation and rainfall in parts of Maharashtr. Jalgaon received 1cm rainfall on Saturday.
However, with another "fairly strong" W.D. approaching, initially the temperatures are likely to rise further by 2/3c in the northern plains.This is because of the warm moisture laden southerlies preceding the system.
The W.D., is likely to bring rain/snow to the western Himalayas during the 3 days from 14th.Jan, and rain to the plains of Punjab, Haryana, Delhi and north Rajasthan from the 15th. to 18th. Some models show the formation of a secondary low over Rajasthan during this period. This may attract south -west moisture laden winds, and bring some rain to southern Rajasthan and M.P.
Subsequently, after the passage of this system, we can expect a renewed cold spell in the northern and central regions of India.Warm southerlies will again give way to cold dry northerlies as the cold front retreats.

Meanwhile, much of northern and eastern Europe were in the grip of a severe cold snap.Much of Europe continues to be plagued by arctic conditions as high pressure remains firmly in control - trapping in stagnant bitterly cold air.
Thus, the first seven days of January were colder than normal by (6.8 degrees C) at Paris and by (7.3 degrees C) at Warsaw.
The eastern part of Germany was the worst affected region, with temperatures sinking as low as minus 26c at Delitzsch in the state of Saxony.
Berlin experienced its coldest night of the year, with temperatures dropping -19 centigrade in parts of the capital. Daytime temperatures were slightly warmer at -9c.
Germany experienced its coldest night in 22 years on Tuesday last,6th.Jan.
Scotland had readings down to -12 or -13 degrees C ,Benson, Oxfordshire, England, came in with -12 degrees C early Tuesday.
kapadias@gmail.com
By Rajesh at January 13, 2009 1 comment:

Almost all the hill stations in the northern states of Kashmir, H.P. and Sikkim had their initial snows of this winter in the last 3 days.
Himachal Pradesh, the hill state, reeled under severe cold as snow and rain continued to lash the region for the third consecutive on Tuesday,6th.
While the higher reaches of the state were having intermittent snow the mid-hills and lower areas were experiencing spells of sleet and showers. The Hatu peak had 15 cm of fresh snow and in Shimla, Narkanda and Fagu and Kufri had mild snow.
Shimla city had intermittent sleet and showers which brought down the maximum temperature to 7.7 degree on the 6th.
Keylong in Lahaul-Spiti was the coldest with a minimum of -11.9c, followed by Kalpa -6.2c. Una was the coldest in lower areas with a minimum of 1.2c, followed by Solan 1.4c, Bhuntar 2c and Sundern

agar 2.5c.
The IMD map shows the nights have started cooling down from the north/north-west regions of the country. Northerly winds are now expected to push the cold air southwards towards Gujarat, M.P. and Maharashtra in 2 days. Temperatures are likely to fall in the nortern plains and Delhi too.

Meanwhile, an artic cold spwell has engulfed the U.K.
The freezing spell that has affected the UK over the past couple of weeks tightened its grip on the 5/6th. with temperatures plummeting down to -10C (14F) in places.
During Sunday night and into Monday, a band of snow spread south, affecting most parts of the country. Heavy snow fell across Manchester, Cheshire, the West Midlands and Central southern England, while London received a dusting by Monday morning.
In Farnborough, Hampshire, temperatures fell to -9.9C (14F), the lowest temperature here since January 1991. Temperatures fell to -9.5C in Woodford, Cheshire, but the coldest spot on Monday night was recorded in Aboyne, Scotland, where the mercury fell to -11C.
So far the winter of 2008-2009 in U.K. has been a particularly cold one with some of the lowest temperatures for 15 years.
But, temperatures are still a long way off the record low of -27C (-16.6F) in northern Scotland 14 years ago.

We are now reading and hearing about the cold wave in the northern regions of India, which, of-course, has now started, and is "catching up" with the cold weather and extreme low temperatures elsewhere in the northern hemisphere. Delhi at 4c, Amritsar at 0.9c, Srinagar at -3c, Kalpa (h.P.) at-5.4c, Pahalgam at -7.4c,Leh -12c and kargil at -19c are some of the extreme lows in India in the week just eneded.
But as discussed before, it is a late winter in our region.