Northward movement of the SWM will be on schedule.
Effective M4 again brings down day temperatures considerably in the Northern regions. Some as much as 10c below normal (Ambala). The variation map from IMD shows most of the Northern region below noraml.
On Wednesday, 1st June:
Highest in Asia: Basrah (Iraq): 49c.
Highest in Pakistan was 47c in Turbat. Several places in the Northern areas got M4 rains. Sialkot measured 23 mms.
Highest in India: Chandrapur: 44c, Brahmpuri 43.5c. Various amounts of rainfall from 10-30 mms were received in North India.
The surprising and fast development of today:
-Core pressure in the seasonal low over Pakistan Sindh region drops to 994 mb on Wednesday. Gradient gets created slowly.
-A full fledged west wind almost all along the west coast of India. Starting from south, Kozhiko

de was total SW, with 54 mms of rain, and Mangalore also SW with 40 mms. Honavar, S/SW with 62 mms. (All rainfall in 24 hrs ended 5.30 p.m. Wednesday). Port Balir in the Andamans received 144 mms.
Honavar, Udipi, Raichur, Alamatty and several stations in coastal and interior Karnataka have received showers on Wednesday
Seeing conditions almost setting in along Karnataka coast, and knowing they will prevail next 24 hrs, Vagaries will advance SWM into coastal (partly) and S.Interior Karnataka on Thursday evening .
Further Northward movement of the SWM will be on schedule. As mentioned earlier in our previous blog, it will now depend on the system formations in the Arabian Sea.
And what is happening, or going to happen in that Arabian Sea ??
Several international predicting models show different and divergent views. From a cyclone moving to Oman, to a depression, after grazing the west coast, fading away in the Sea, to a depression along the western coast of India. All show a system forming off Goa around the 4th/5th of June.
Vagaries' Estimate:
Currently, there is an off shore trough already formed off the Kerala coast. and, an embedded UAC lies off the Kerala coast. As the SWM moves up into Karnataka coast (by Thursday), the trough will get extended, and the UAC, will deepen and move into a northward extended area. (Hence SWM rains advance into Karnataka).
click here for enlarged view 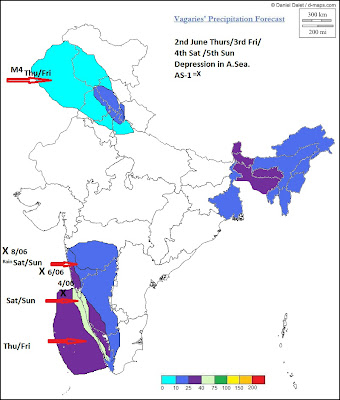 By the 4th, Saturday, the UAC will descend to sea levels, and form a low, AS 1, of around 1000 mb off the Goa coast. (I would advance SWM to Goa then).
I would estimate AS 1 to move NW from Goa for a couple of days, and become a depression of about 996 mb in the 65E-70E region. And subsequently track west, and move into Oman as a rain system.
Naturally rains will be heavy in Goa Sat/Sun. Meanwhile rains along Karnataka and Kerala coasts will be heavy, till Sunday. Monday, heavier rainfall will move into S.Konkan.
Mumbai will get the promised premonsoon showers from Thursday, gradually increasing on Friday and Saturday into evening thundershowers. Heavier thundershowers with gusty winds on Sunday evening. Sunday will be windy with choppy seas.
By Rajesh at June 01, 2011

I was expecting the system which will be formed in the arabian sea to move towards the gujarat coast but the system will move towards oman coast.Im really very disappointed.Rajesh please tell me when the south gujarat will get its first monsoon shower?

Most forecast model making some sorts of changes in their prediction of system every day. I just saw latest ECMWF model which predicting low to graze past raigad district in north konkan on monday & come very close to mumbai on tuesday. I wont surprised if IMD declares monsoon over mumbai on tuesday or wednesday. After that ecmwf expecting it to move westward towards north arabian sea as DD/TS. I think more surprises r in store for us. We can just wait & see.

excellent forecast for Mumbai Rajesh,i stay in Mankhurd/BARC and it poured between 6.30-7.15. must have easily recorded over 40-50mm.