A low has formed inland near South U.P. /North M.P. border. This is the result of an embedded UAC in the trough axis descending to sea level.
I do not read much in this, and expect this low to merge in the axis. Subsequently, it is expected that the axis would move a bit North from Thursday.Thus a reduced rainfall in regions south of the trough axis.(See note on Monday's blog).

As the wind chart shows, the formation of the low has reduced the direct " easterly wind flow into H.P. and Northern Pakistan. As a result, rainfall will be generally reduced in H.P, Punjab and Upper regions of Pakistan from tomorrow. The highest amounts in H.P. was at Nahan which recorded 210 mms, Dharamsala which measured 83 mms till today morning. Nainital in Utterakhand measured 70 mms.
In Pakistan, Lahore recorded 98 mms of rain on Wednesday.
The weak MJO phase prevailing in the North Indian Ocean regions, (that is in our 2 seas on either side of the sub-continent), is expected to gradually see a reinvigoration from 5th/6th of July. This would enable the SWM to gain momentum, and we could very well see BB2, form after around the 5th of July. 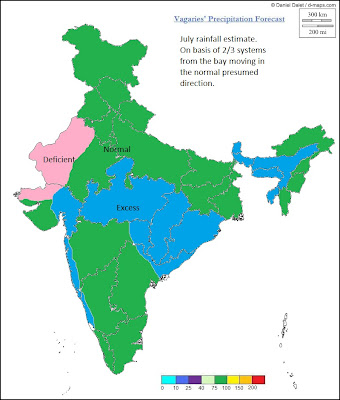 As the existing trough line moves north, the first week of July will bring normal rains into Northern U.P. and Utterakhand.
As one would expect the active MJO to last around 20 days, we can presume at least 2 systems from the bay after 5th of July till 25th of July. Presuming a normal course inland, we can expect some excess rains along the central states and Gujarat, and normal rains in the southern peninsula.

Thursday: Cloudy, with a few passing showers. Rainfall decreasing from evening, and
Friday/Sat/Sun will be sunny, with partly cloudy skies. Few showers in some areas. Hot day temperatures on Friday/Saturday.

Sorry Vishal, the link was to come on Mumbai Page..and has been thus posted ..Thanks.

dna has a report of very low water supply in mumbai...but your update on mumbai page doesn't say that...is it worrying???

Ron,I have given the exact position of water in lakes. Full storage =13. Actual storage today = 1.61.i.e. 45 days @1.02 per month consumption.
July should get normal rains.
Supply is in charge of BMC, so what is worrying or not is left to individual to decide.Nature provides rains, supply is left to man !
Water supply is out of Vagaries'scope.