FIRST SNOWFALL OF THE SEASOn in SHIMLA 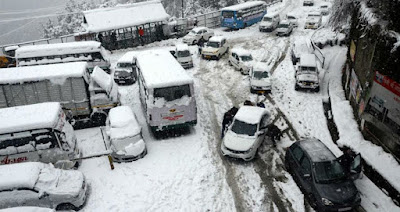 snow has been recorded in Badrinath, Kedarnath and Rohtang Pass with Shimla observing the first snowfall of this season during the last 24 hours.

Srinagar and higher reaches of Kashmir received snowfall, while rain lashed other parts of Jammu and Kashmir on Wednesday. Snowfall also occurred in some parts of Ladakh.

In Uttarakhand, higher reaches of the mountains in both Kumaon and Garhwal regions of the state including Badrinath, Kedarnath, Gangotri, Yamunotri, Auli, Hemkund Sahib and Munsyari received heavy snowfall

Many parts of Kinnaur received around 10 inches of snowfall.
32 cm snowfall was recorded in Kalpa till 8.30 am on Wednesday and the minimum temperature dropped to minus 1.6 degrees Celsius. 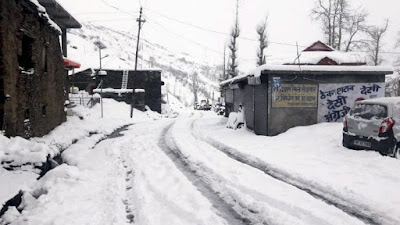 With this, most areas in Haryana and Punjab recorded "satisfactory" or "good" air quality, the first time in the last two months.(See Latest Snippets)
Delhi rains 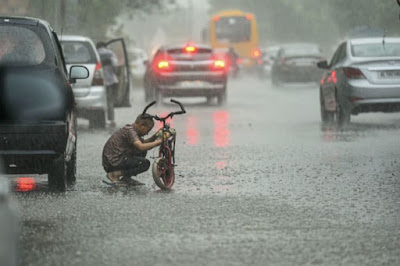 A low is expected to form in the South Arabian Sea on 30th November . Location is at around 5N and 57E. It will mostly track Westwards or even South Westwards.and deepen.
Due to this track, Not likely to have any effect on India's West coast.

Effect of precipitation will last till Thursday , and then clear weather.
New Delhi will have some showers and hail on 27th and 28th. Clear weather from Friday. Night temperatures expected to fall from Saturday to 10-12c . Foggy mornings on Friday/Saturday.


A picture worth Sharing:

It is a photograph of a gigantic jet as observed by pilot Chris Holmes as he traveled at 35,000 ft over the Gulf of Mexico near the Yucatan Peninsula. He noticed the big thunderstorm (or cumulonimbus cloud) producing lots of lightning with sprites and jets.

Rare gigantic jet snapped, this time over the gulf of Mexico - plus a 'pancake' sunset in N. California 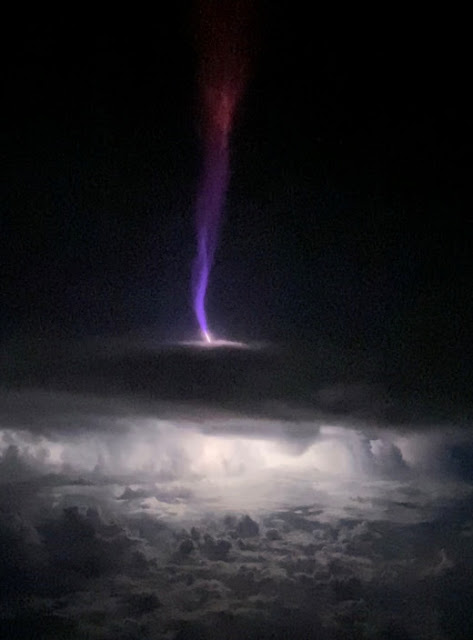 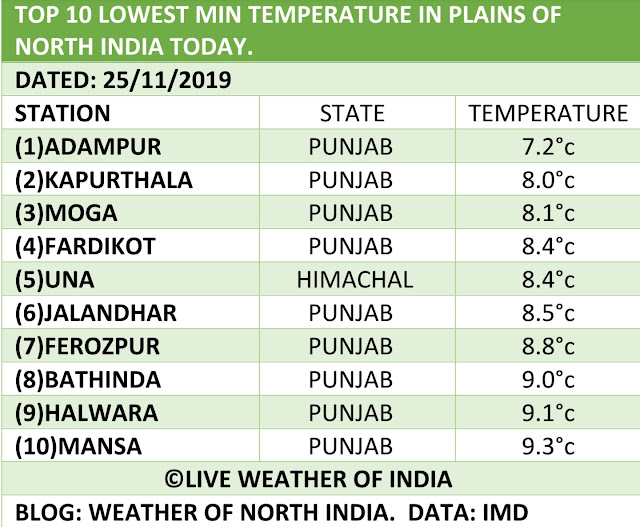 Leh shivers at minus 6.3 degrees Celsius;

The high altitudes of the Union Territories of Jammu and Kashmir, and Ladakh including Gulmarg experienced fresh snowfall, while the plains were lashed by light to moderate rains between November 21 and 23.

Besides Leh, he said the nearby Kargil town and the famous ski resort of Gulmarg in north Kashmir also recorded sub-zero night temperatures of -3.8c and -1.3c, respectively.
The high altitudes of the Union Territories of Jammu and Kashmir, and Ladakh including Gulmarg experienced a fresh snowfall, while the plains were lashed by light to moderate rains between November 21 and 23.
Minimum Temperatures start to fall in Maharashtra...The lows on 25th Morning:
Ahmednagar 12.5c, Osmanabad 12.8c, Nasik 14.0c, Mahableshwar 14.5c, Pune 14.6c, Mumbai Scruz 22.2c,
Jabalpur was 14.0c.
And...The Heat. 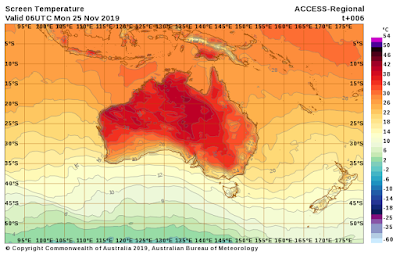 Australia is battling through its ‘most significant‘ heatwave for 80 years that has seen temperatures soar above 40c for six consecutive days across the country.
Roads melted, animals dropped dead and fires raged as temperature records tumbled across New South Wales, South Australia and Victoria.
Hundreds of Australians have flocked to Bondi Beach in Sydney to cool off from the extreme summer temperatures.
The latest mind-boggling figure was reported in the town of Noona, in New South Wales, which reported an overnight minimum temperature of 35.9c on Thursday – a new record for the whole of Australia.
Roads melted across Australia as temperatures soared into the 100s for the fifth consecutive day amid a record-breaking heatwave that has broken records
On Wednesday alone, New South Wales broke 14 all-time heat records and eight January records, including in the town of Griffith which suffered through 46.4c heat.
Menindee, in the far west of the state, was due to hit  45c on Friday having broken its all-time record with a temperature of 47.8c earlier in the week. It hasn‘t seen a daytime high below 45c since Monday.
Broken Hill airport, Whitecliff, Wilcannia, and Albury all saw their hottest days since records began on Wednesday.
Meanwhile Marble Bar, in Western Australia, recorded the highest temperature of the last seven days with a blistering 49.1c on Sunday, marking a January record. Tarcoola, in South Australia, also hit 49c.
From Stock Daily Dish
By Rajesh at November 25, 2019 2 comments:

A very interesting article on our region cyclones in Economic Times of 22nd November.
Written and scripted by IITM ( including Vagarian Vineet)

Current Western Disturbance, over Iran, is likely to bring winter conditions in the North (Of the Sub Continent).
From Wednesday 20th, Northern Pakistan and  Balochistan will see good amounts of rain and snow. 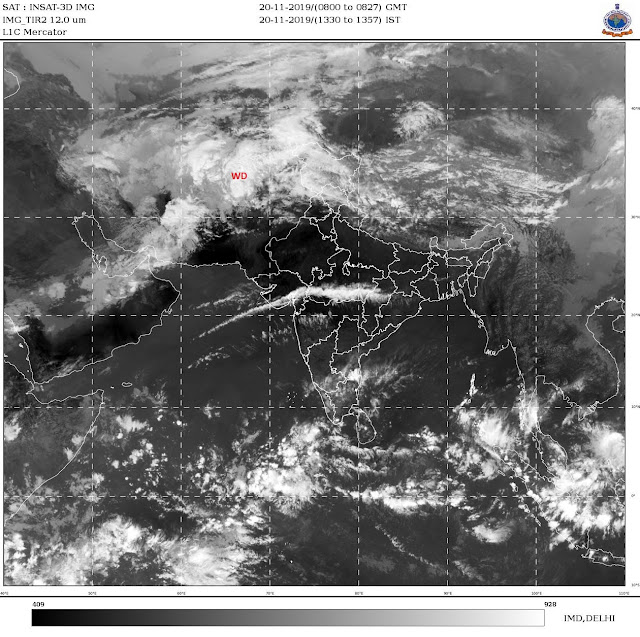 On 21st, Rain/Snow will cover Kashmir and H.P. in India.
Pakistan Northern regions and Punjab and Upper Sindh will see rains.

On 22nd, Rain /Snow will blanket Kashmir and H.P. and penetrate into Hills of Uttarakhand.
Srinagar has had 200 mms of rain/snow this season till today ( Normal 45 mms), and fresh snow is expected in the City and the hills.

Winter temperature will see drop in Day and Night readings effective from 25th in North/NW India, Rajasthan, and Gujarat and north Madhya Maharashtra. Day temperatures expected to drop and produce cold day condition in the North..
By Rajesh at November 20, 2019 4 comments: 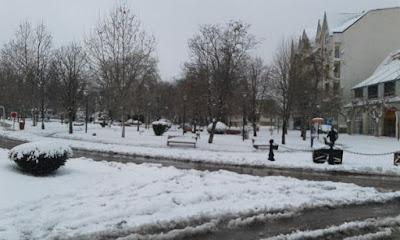 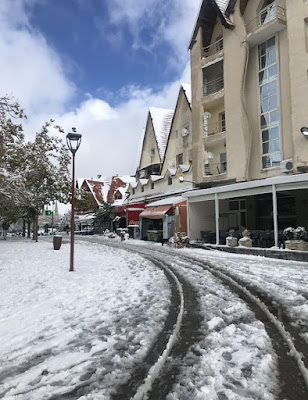 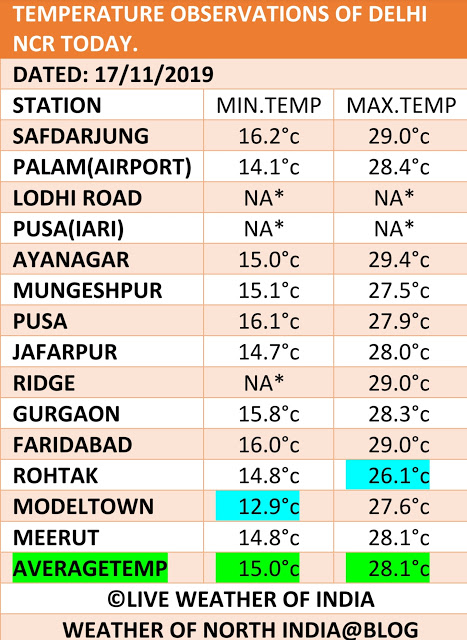 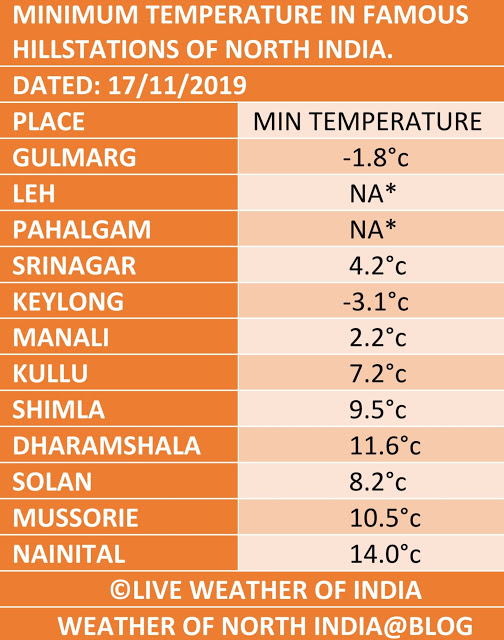 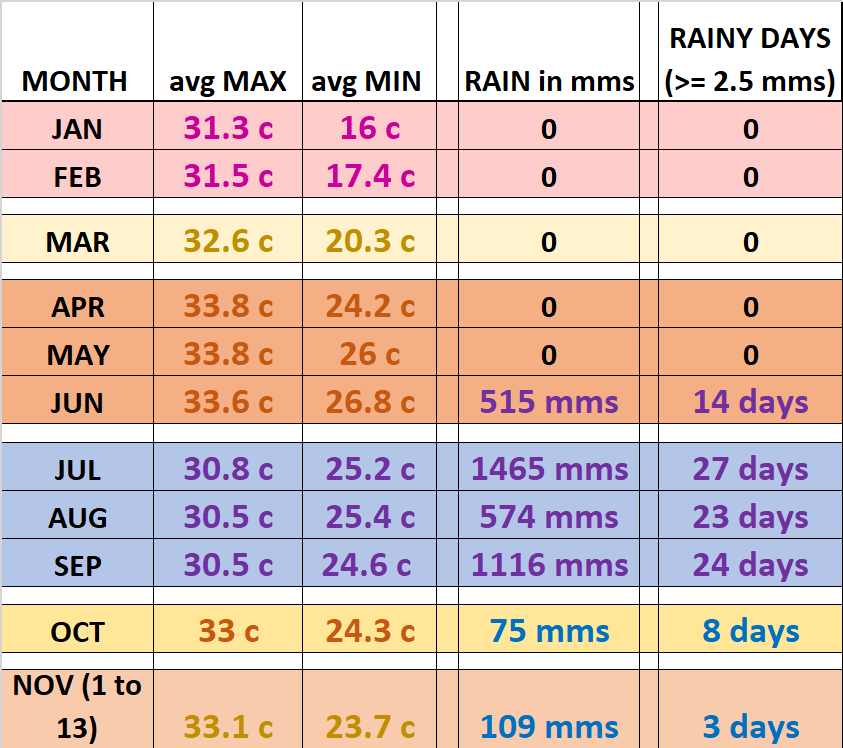 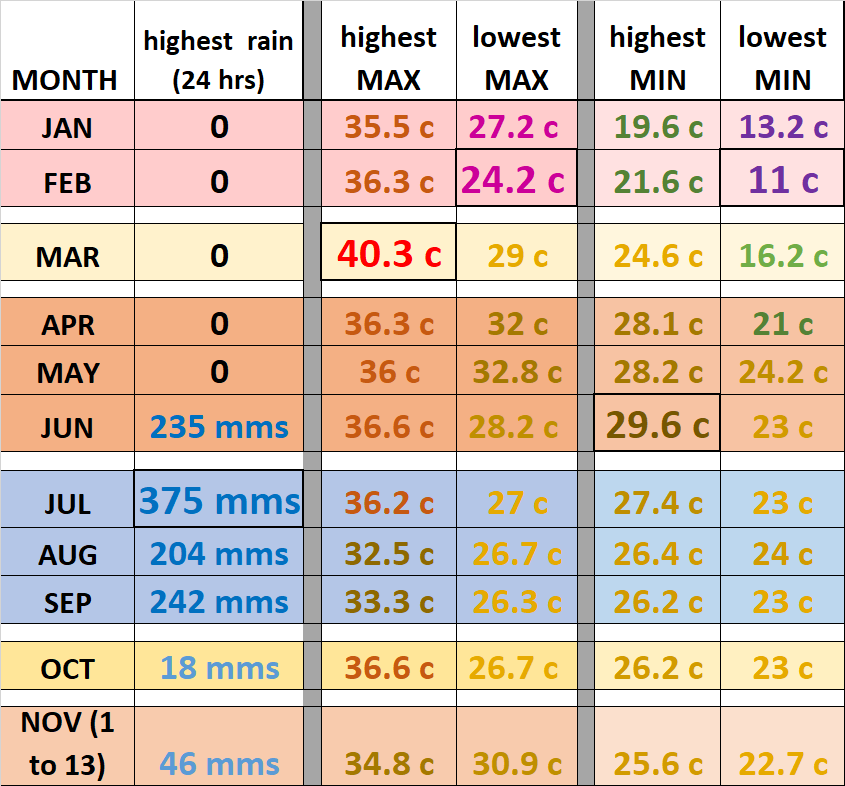 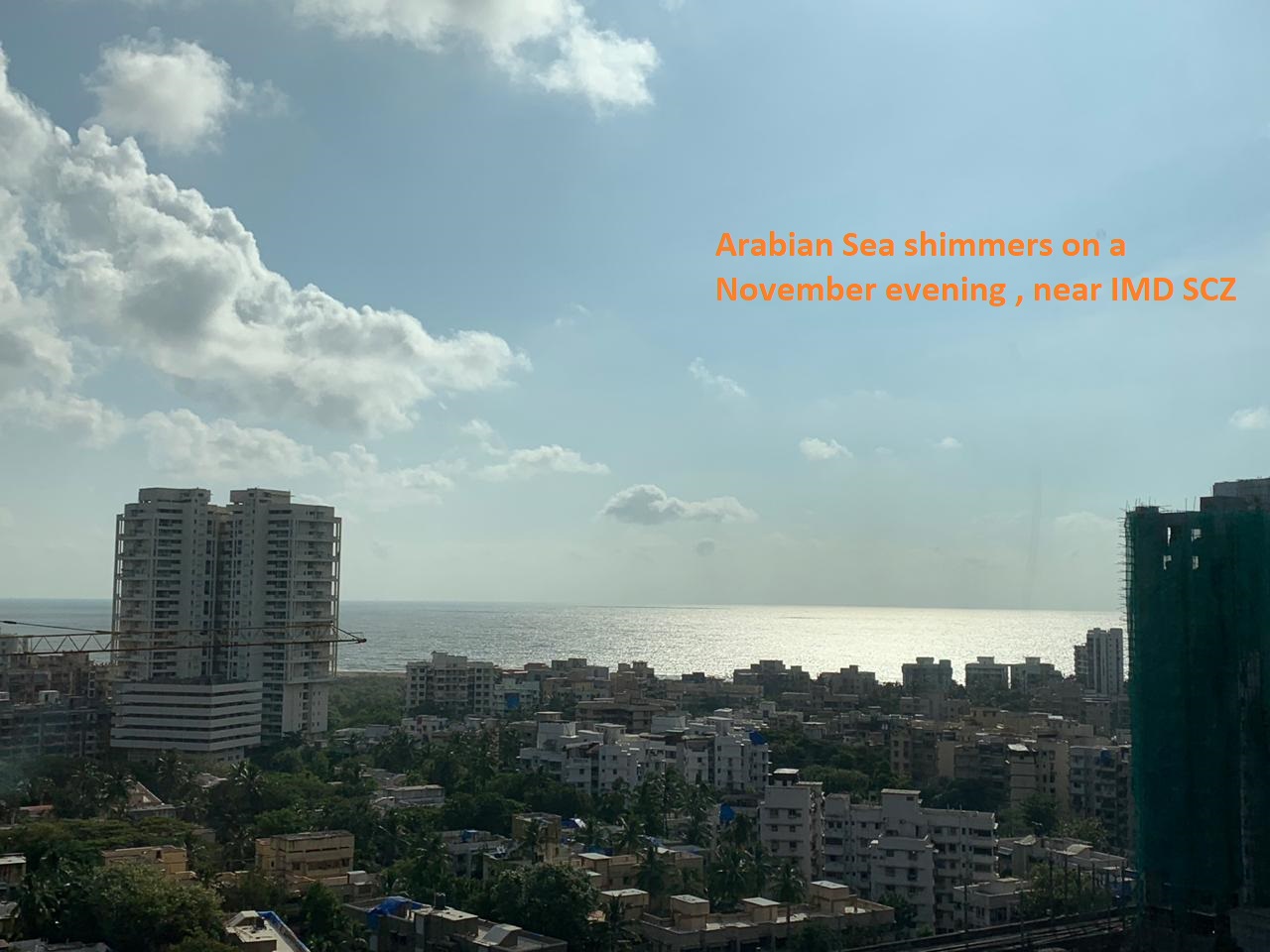 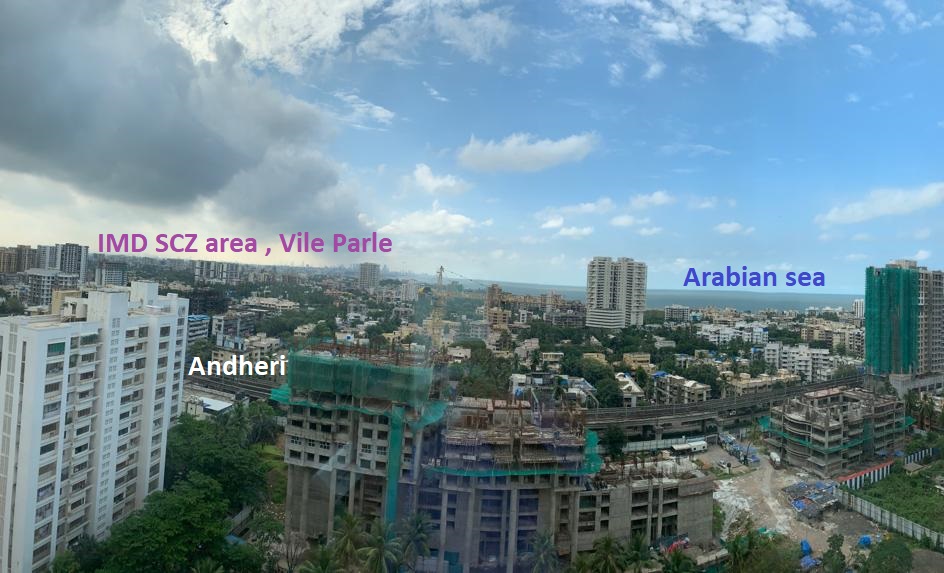 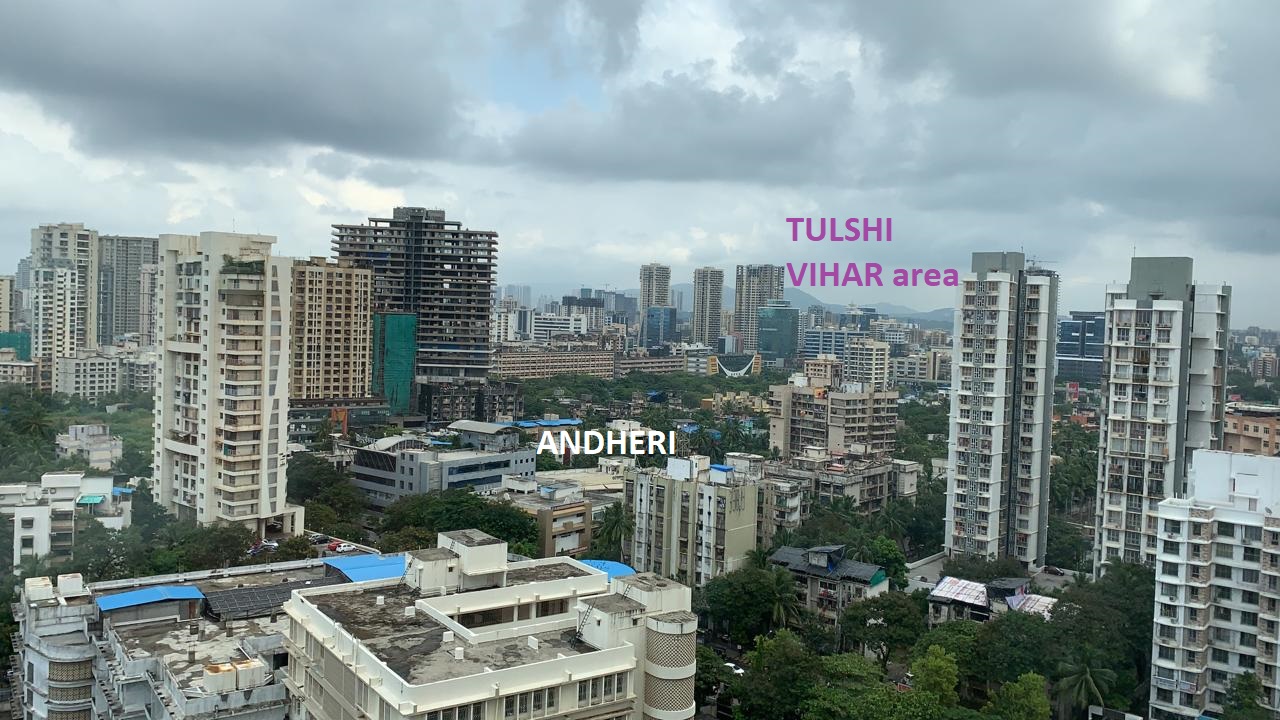 If Diwali is in November , North India is the driest and coolest part of the country during Diwali.

Dehradun is crisp,cool and dry during this season.

Thunderstorms / Cyclones may occur during this period over Eastern India.
East/North-East India has milder and drier Diwali days in November as compared to October . 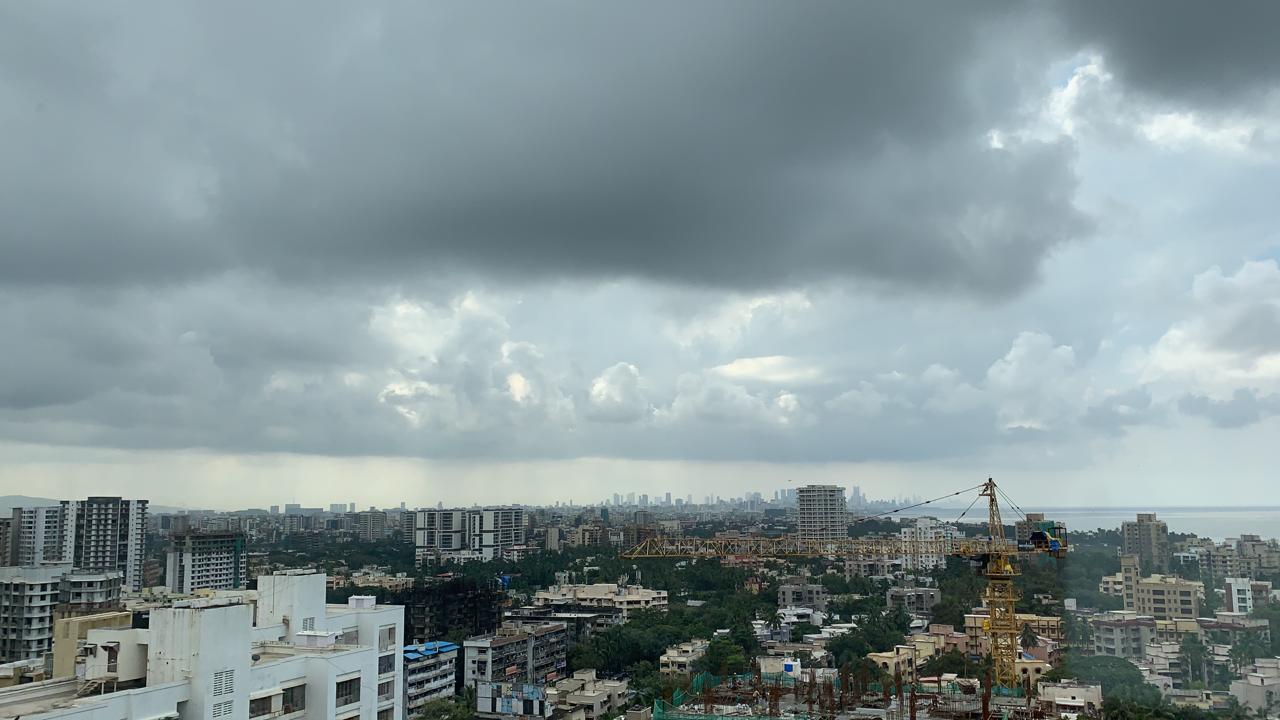 Diwali marks the transition season on the way to cooler weather over most parts of the country.

2. Deccan Plateau (South India) :
Bengaluru and Hyderabad have fine weather during this period.
Bengaluru can be cloudy ,cool and rainy during this time.
Hyderabad is drier.