The Heat Wave has appeared,in parts of Gujarat andMaharashtra today, (29th.). Baroda was 42.4° today and Akola was 42.7°.Ahmedabad and Sholapur were at 41° while Aurangabad,Pune andNagpur were a few of the cities which recorede 40° today.Even Mahableshwar was at an un-natural34°.

With this heat,now likely to spread to more areas of Rajathan and M.P.the seasonal low is likely to form in a weeks time.The next steps of low formations over India/Pakistan and over the Bay in April, will be determined,by the extent of heat in April over the sub-continent.

These will be the monsoon parameters to study.
By Rajesh at March 30, 2007 No comments:

Carrying on from my last posting,I had indicated the formation of a "high"in the North Pakistan/India region to begin.Well, the "high"is not establishing itself as required,in fact the contour maps indicate a "high" to have formed as on 27th.March.but just around North India,not extending into the west.This is because the temperatures are not conducive enough,not high enough ,to fasten the formation.In fact,the map shows the whole of N.India in "purple "shade,that is ,below normaland most of India in the green (normal) area.

As a result of the "High" not forming,the appraoching W.D. may yet again give some rain/snow in the Northern parts of Pakistan/India on 31st.March/1st.April,as it can push through a weak "high".

But,still,it may be too early to "push"the monsoon date ahead because of this develpoment,as with the passing of this W.D. the area may heat up fast again (which it will in all probabilities).Then the formation of the "high" can be fast ,and give way to the seasonal "Low" within a week or so.

The formation of the latest cyclone in the southern hemisphere today, is another parameter to be observed for the monsoon.These cyclones down below, if extended beyond 31st.March,tend to hold the ICTZ below the equator ,when, actually it should start its northward journey from around 10th.April. But still,we should watch the formation of cyclones down below once April begins.
By Rajesh at March 27, 2007 No comments:

With the moving of the W.D. towards the east from Kashmir and the plains of N.India,the last of the strong effective W.D. of the season seems to have passed.On 22nd.March,the plains of Punjab and Haryana had thundershowers while Delhi had some rain and the hills snow..A mild cold spell follows this system,for a day,upto 25th.March.

A W.D. is effective as long as the winter deep trough in the Pakistan/N.India region stays put,generally throughout winter.This then gives way to a high pressure region in the North,as a result of which,appraoching W.D's meeting with this "high" generally do not gain strenght.As a result,the temperatures start rising,and the "Heat low"is formed.say,about 20-25 days after intense heat.Finally,in May,this "Heat Low"stretches from Arabia to Central India.
This "heat low"is the main attraction and puller of the Monsoon and has to be well formed.

So,with the interior parts of India and Pakistan slated to heat up from end March,the required "Heat low" should start building up ,and on the other front, the waters of the Bay of Bengal can get the required heat to form the first pre monsoon low around the 20th.of April.

If this moves as per the scheduled sequence,the monsoon can be on time this year.
By Rajesh at March 22, 2007 No comments:

New World Rainfall Record.
The world record for most precipitation in a 72-hour period was shattered this month when the French island of la reunion recorded 12.9 feet (3929 mms) of rain. La Réunion is a small island in the South Indian Ocean east of Madagascar. Despite the island's small size--about 30 miles across--it has two tall volcanoes that rise over 8,500 feet in altitude.
Réunion already held the world record for a 3-day precipitation event, the 3240 mms that fell during January 1980 in Tropical Cyclone Hyacinthe. Another tropical cyclone--Category 3 Tropical Cyclone Gamede--set the world record this time.

Today,16th.March,the first 40°c of this summer in India was recorded.And that too in ..of all the places...Mumbai ! On 16th.,Santacruz was 40.0°c(+7) and Colaba was 39.5°c(+9),not only the warmest in India,but the sub continent.And that too when the other traditionally hot stations were still way off the 40° mark.Nagpur is around 34°,which normally touches 40° first,while North India is still way below normal around 25°c.

The heat has concentrated around Mumbai only,as the other stations along the coast have not exceeded 35-36°c.This is due to a sudden gush of Easterly winds,preventing the cool northerlies,or the westerlies from cooling the city.
By Rajesh at March 16, 2007 No comments:

With the last mentioned W.D. now moving away,we may expect very windy weather in N.India and in central and western India.Night temperatures will fall by around 4°c in the next few days.

Mumbai and rest of Maharashtra, will be windy for the next few days,with pleasant temperatures till Sunday.Nights should get just about a bit pleasant for a few more days.

Another approaching W.D. should give rain/snow to Kashmir,H.P.and Utterkhand on 19th./20th. of this month.Plains of Punjab may get rain too.

This W.D. will be particularly strong in Pakistan,with fairly good rains in Sindh and Karachi on Sunday/Monday.
By Rajesh at March 15, 2007 2 comments:

Email ThisBlogThis!Share to TwitterShare to FacebookShare to Pinterest
As mentioned in my last write up,the strong W.D. has hit N.India and brought back winter conditions on 12/13 March. Storms have been affecting parts of northern India over the last few days, bringing heavy rain, hail, thunder and with some heavy snow falls too over the higher ground.
In H.P.normal life in the hill state was thrown out of gear as snow and rain lashed the region. The tribal areas of Kinnaur and Lahaul-Spiti, Churdhar, Harpur Dhar, Dhauldhar and other higher reaches have been having incessant heavy snow.
The tourist resort of Manali, Narkanda and Solang nullah are also having intermittent snow. Dhundi in Kulu has recorded the highest 200 cm of snowfall during the current spell, followed by the Rohtang Pass (120 cm), Solang Nullah (123 cm), Keylong (80 cm), Patsio (60 cm) and Bahang (Manali) 50 cm. The Hatu peak recorded 70 cm of snowfall while Narkanda and the nearby tourist resort of Kufri registered 30 cm and 5 cm, respectively.
The state capital,Simla, and the surrounding areas have been having continuous rain accompanied with sleet and snow flakes since 12th..It was followed by a mild snowfall. The high-velocity winds brought down the temperature to the freezing point. The nearby tourist resort of Kufri and Fagu had a mild snowfall.
The Churdhar, Haripurdhar, Chanshal slopes and other higher reaches have recorded the heaviest snow fall of the season in this spell.The roads leading to Chopal and Rohru were also blocked due to heavy snow. Narkanda has recorded 80 cm of snowfall over the two days.

In Chandigarh,the rainfall for the month of March crossed the 123.7 mm mark, city roads wore a chaotic look. Four spells of hailstorm and 24.6 mm make it impossible for vehicular traffic to move. The recorded 123.7 mm of rainfall for March is 109-1 mm above normal .
But this time the rainfall has been heavier, said met officials, confirming that this was unusual for March. Unseasonal rains caused the cold wave to return,12th. being the coldest day in March in the last 11 years.

Srinagar too,had the heaviest snow of this season on 12th.an unprecedented two feet of snow was recorded on Tuesday morning.
By Rajesh at March 15, 2007 No comments:

Mild Winters...Continue...
Parts of Japan and China, on analysis of their winter statistics have declared the 2006-2007 winter season to be their warmest on record. This comes on the back of similar claims made by the UK and parts of Europe this week.
The warm winter also set records in the Japanese capital, Tokyo, for being the first winter on record not to have seen any snow ( since records began in 1876 ). The average date for the first snow of winter to be seen is normally 2nd January. The previous record for the latest appearance of snow was February 10th in 1960, but as February came and went, this record was well and truly smashed.
In China, Shanghai and the capital Beijing experienced their warmest winters on record ( Shanghai records began in 1873 ). The average temperature in Shanghai over the winter was 7.3C (45F), some 2.3C above the long-term average.Beijing also broke a 160 year old high temperature record when it recorded a temperature of 16C (61F) on 5th February.Meanwhile, Hong Kong recorded its warmest February on record with both the February mean temperature of 19.5C (67F) and the mean daily minimum temperature of 17.8C (64F) being the highest ever seen there.

W.D. coming again:
Meanwhile for Pakistan and India,another "big" W.D. is on its way.It is expected to rain over central and N.Pakistan from 8th.March. N.India hills will get snow and the plains of Punjab,Delhi,Rajasthan and parts of M.P. will get rain from 9th.

Subsequently,cooler weather will cover much of the central and northern parts of India and Pakistan.

Mumbai will see a definite cooler clime from 9th. onwards.Mumbaites will find a pleasantly better weather straight upto the 15th. of March.
By Rajesh at March 06, 2007 No comments:

Winter by passes Mumbai and Central India:
With the starting of the month of March,it seems the winter has given the Central parts of India and Mumbai(and Maharashtra)the by-pass.During this winter ,the average temperature in Mumbai was 1.12°c above the expected normal winter temperature,with the mercury touching 36°c on several occasions.The average temperture this winter at Pune was 1.22°c above normal.Thus indicating a warmer winter in the region.This is due to winds remaining predominantly from theEast and southwest.
On the other hand,the scene in North India was similar.Delhi had an average of 0.66°c above normal, Jaipur and Lucknow were 0.3°c and 0.6°c above normal while only a small pocket in Punjab was below normal. Amritsar in Punjab was 0.54°c below normal.
Thus,almost the entire country had a warm season this winter.
The winter in Pakistan was still milder.Islamabad was above the average by 1.35°c and Karachi in the south was 1.6°c above.
A warm winter was also the case in Europe.
the UK Meteorological Office declared yesterday that winter 2006-2007 was actually the UK’s second mildest on record. In fact, for the South of England it is the mildest on record. It has been notably warmer than average over the last few months.
At the end of January the Royal Horticultural Society confirmed most spring flowers were in bloom between Yorkshire, Devon and Surrey – including rhododendrons, not normally seen until March.
MeteoSwiss declared this winter to be Switzerlands warmest since records began 140 years ago.
The German Weather Service declares this winter also to be the warmest on record across Central Europe.

As we bow out of February and the final statistics are fully analysed, it may not be too long before other countries make similar statements regarding the winter of 2006/2007.
By Rajesh at March 01, 2007 No comments: 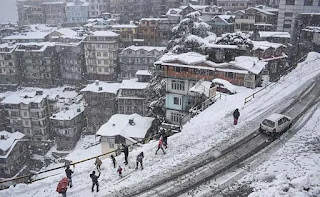