A good example below of Image showing perfect clouding along the Monsoon Axis Line..Image from IMD 4.00pm IST..west coast trough off Karnataka getting weak.. 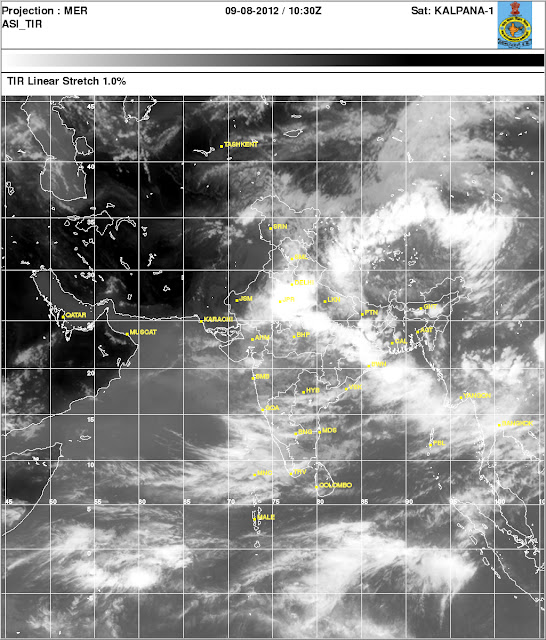 Rainfall expected along axis line Thursday..MP, East  Rajasthan and West UP...rains dragging to the west on the weekend.
Rains along coastal Karnataka and Kerala for one more day...
Detailed forecast for Weekend will be put up tonite (Thursday Night).

Vagaries' has imposed the diagram over the IMD Satellite Image showing the Monsoon Axis. (Below)
The Elongated Low over Pakistan is the Seasonal Low...And the otehr lows seen in the axis are normal.

Actually an axis is the joining line of such lows. Its NOT any system.
(The "low pressure" mentioned hitherto in the IMD bulletins has never been announced in Vagaries, as, no chart, not even the IMD MSLP charts, show any such system. Vagaries has mentioned an UAC.)
Check the clouding along the axis.

A trough runs from the Eastern end of the Axis along the east coast. A feeble trough runs South of the Karnataka coast. 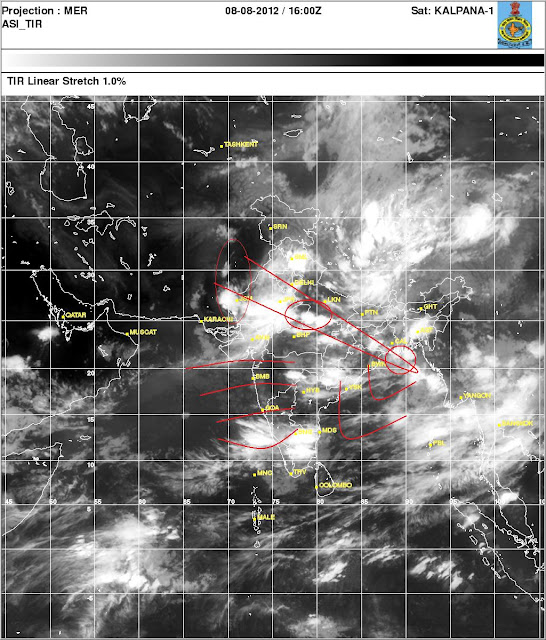 Happy to see SPIN getting above normal rains for the last 3/4 days..

All our friends from south particularly Bangalore etc would be slighly relieved..

Hope Har.CHd&Delhi, Punjab , West Rajasthan , Sau & Kutch and Gujrat also manage to reduce their defecit.. All are currently over 60% deficit as of today..

No decrease in intensity of Rains in Karnatka

High intensity rain lashed several parts of the Dakshina Kannada District on Wednesday causing flooding in low lying areas in many parts of the district.

sir news channels are sgowing that 1 of the six lakes which supply water to mumbai out of them modaksagar is overflowing frm yesterday morning plz confirm on this.n for my kwomledge plz tell me which are the lakes out of those six lakes that provides drinking water to mumbai.

Yesterday evening some areas of Surat recieved some medium showers while some areas were absolutely dry. Athwagate and Adajan areas received 15mm of rainfall while citylight and bhatar areas were dry.

At present Surat is receiving some medium showers.

Showing dense cloudmass off North kerela and karnataka coastline. If this moves east, its going to be one massive spell of rain. Hope we get something out of this.

Wow! from where do you get these stats about Moodabidri, Panaje and sulya. Rain stats that too with exact time details is great.

6th Straight day of Rains in areas around Chennai....As usual Nunga missed....Hats off to Rajesh Sir who personally said to me that it would rain widespread only on 8th night for Chennai Region

@Pradeep Any rain possible today in and around Chennai?

Till now, no thunderstorm activity can be seen around 150 to 200 km vicinity which develops around the 3.00 pm mark

Around 5.00 pm we can have a clear picture. Its damm humid. There are more chances to rain in the suburbs than the city but not more than 10 mm.

No stopping of rains in Kollur in Karnataka, gets around 1000 mm in last 6 days
-------------------
This was supposed to be the weak phase of MJO for Southern Peninsula. The intensity of rains have been reduced in Maharashtra. However, in Karnataka and Kerala it has just started pouring. Not even IMD or other models predicted such heavy rains for these two states particularly Karnataka. One place, Kollur which along with Agumbe and Hulikal dominated rainfall in 2011 got heavy rainfall for past one week.

Only Kitwade, Amboli and Tamini have got more rainfall in August this year.