WORLD METEOROLOGICAL DAY - 23rd. March 2011
This was the day map on WMDay for the sub-continent. Far better than last week. With 40c as the highest for the day.

Forecast till 27th. March. Sub- continent Weather for the week-end. 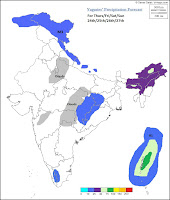 Possibility of a low in the bay was mentioned in Vagaries. Let's name it B1, it should form around the Bay Islands around Saturday, 26th. March. But, as mentioned earlier, do not expect this to deepen beyond 1004 mb, leave alone effecting the Indian mainland.
Should move a bit NE initially, say on the 27th/28th, due to the passing of M3. But as M3 is too far North, and feeble, B1 will again turn North, and fizzle out before the 29th.
Yes, I have not mentioned it yet, but M3 is coming by Saturay, but will be feeble, and in the Northern parts of Kashmir.
Effect on Pakistan, also on Saturday, will be restrictd to the Northern most regions. M3, weakened and scattered, should slide into western and pockets of central Nepal on Sunday, 27th. March.
The weather chart on Thursday shows a line of wind discontinuity (where wind in opp.directions meet) running across the East-Central India region.
Caused by heating, this line produces some clouding along its run.
Could forecast some rainfall next 2 days, Friday/Saturday, in western A.P. and Orissa and Chattisgarh. Cloudy weahter in Vidharbha and east M.P. till Saturday.
Nagpur can expect clouds till Saturday, and day high at 40c till this weekend. Then, 42c from Monday !
With clouds extending into Delhi, the days will be maintained at 36c till Saturday. Sunday, expect 38c !
In Pakistan, days are contained within 40c today in the hottest Sindh desert regions. And may not see any substantial rise, maybe 41/42c till Sunday.
For Karachi, Westerly winds will continue till Sunday, keeping the day within 35/36c.
Islamabad, as mentioned before continues to be pleaant with the day not going above 30c. and will continue with this range till Sunday, with maybe some light shower on Saturday.
For Nepal, I have mentioned some rain slipping into the country on Sunday. Kathmandu too can get upto 5 mms of rain on Sunday. Day night range till Saturday will be between 30- 13c , and day will be a bit lower on Sunday.
Mumbai Forecast:

Thursday/Friday: Some clouds. Westerlies will keep range between 33c and 22c.
Saturday/sunday: Clear and a slight rise in day to 33c, but the minimum could drop a bit to 21c.
By Rajesh at March 23, 2011

Hello Rajesh,
Due to expect the peak heating to be lower this year (In view of active La -Nina conditions) or There is no one to one correlation between la -nina and benign summer conditions.

Hello Ananth, Shall put up a reply on the blog tonite...thanks

Rajesh, the lightning map shows lot of lightning in one band east of Mumbai and going north. What is happening?

nt, the clouds NE of Mumbai are not high, and cloud top temp is just about 0c. clouds are not charged.
These clouds are the ones indicated in "grey' on the Vagaries map put up yesterday.
Doubtful if actual lightning is there, though we see some cumulus build up from Mumbai.