India is a vast country, stretching from 8N way up to 35N. And there can be huge variations in climate and weather in such a difference in latitude. As well as the geographical topography differs all along the length of the country.
When does Summer begin for our region? On the basis of previous years' behaviour of the rising temperatures, and from past records and observations, i would consider 1st March as the start of the Summer season for the entire stretch of India, barring the Northern States of Kashmir, H.P. Utterakhand, and the NE states , east of Bangladesh.
These exempted states have a prolonged winter, by 15 days, before they too fall prey to the blazing sub-continent sun.
And, normally, the behaviour of the rising temperatures, that is the "route" summer would take is from the South towards the North.
Too early ? You think 1st March is an early assumption of Summer arrival date ?

Last year, 2010 March, was hot from the start itself. Reason: A high pressure ridge at 500 mb had established itself over the Sindh/Gujarat region in early March itself. This ridge moved east and plonked over NW India.
This prevented the westerlies, and the jet streams, associated with the W.Ds from coming and precipitating over the sub-continent. Instead the W.D.s and cold fronts were pushed up further North into Central Asia last year.
Well, we have exceptional years like this image too ! March 14th. 2007.

March 2011 has F5 transversing across the Northern States of the sub-continent till the 5th. of March. So week 1 is ok and cool. As of now, week 2 has no W.D. coming up to keep things cool. But M1 is a possibility around 10th.March. But we will wait and watch for the developments.
I see temperatures rising after 8th. March in the Northern regions. But central regions will see rising temperatures by about 2c in the 1st week itself. 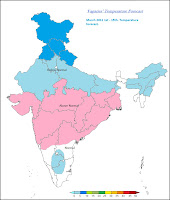 First of March is the start of summer for some parts of Nepal too. Chiefly for the southern planes of the country. Kathmandu has a brief spring period. So maybe 20th or 25th of March would be the real start of summer. For the northern mountains, summers starts late. We depend so much on the rivers flowing down from the mountains especially for electricity generation. And its not till the mid of April that there is any appreciable increase in the flow in those rivers due to snow melt.

Thanks for the update Neeraj.