In our Monsoon Watch Series, readers may remember that if the event of La Nina or El Nino is present, it is considered as one of the parameters in calculation of our forecast.

Ananth, in reply to your query:

Similarly, this event could also be effecting the sub-continental summer. A La nina this year, though moderate now, and a negative IOD, will reduce the number of W.D.s , (not cease them), but not in excess too. Thus, summer rains may be just about normal in the North, indicating 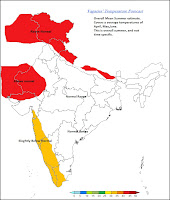 that heat may be excess in the Kashmir/H.P. region, but around normal rains in the plains of the Northern Sub Continent.

Sindh and Rajasthan may heat up a bit, but not too excessively.

Similarly, La Nina usually sends easterly waves during the summer months to the southern peninsula bringing some more than normal rains. Hence near normal summer temperatures for the peninsula .

Monsoon Watch, our annual series chasing the Monsoon, will commence from 10th. April this year.

Thank you Rajesh for your thoughts.