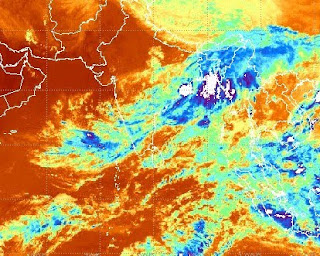 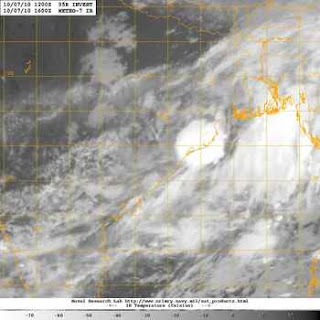 A follow up of the system in the Bay shows it moving along the expected track.
After grazing the Eastern coast of India, the system, now a depression as per IMD, at 1000 mb, is located today evening at 19.2N and 83.5E, 100 kms from Vizag.
However, The rainfall precipitation from the system has not been very heavy as yet.And does not seem so as on Thursday night, seeing the satellite image (above) from NOAA.
In fact, on Wednesday/Thursday, due to strong westerlies rushing towards the system, rainfall was heavier in Kerala.
Some of the heaviest recordings were from Kerala were, as on Thursday morning in cms: Piravom (Ernakulam dt) 18, Enamackal (Thrissur dt) 17, Chalakudi (Thrissur dt) 16, Thrissur, Kunnamkulam (Thrissur dt) and Vellanikara 14 each, Vaikom (Kottayam dt) 12 each, Chengannur (Alapuzha dt) 11, Vadakancherry (Thrissur dt),Kozhikode 6.3, Alapuzha 6.2, Thiruvanthapuram 5.9, Panambur 4.3.
While A.P. and Orissa recieved in cms as: Chandbali 6.7, Paradip 6.4, Balasore 6.2, Imphal 5.4, Muzaffarpur 4.8, Digha 3.1,
It is expected to cross the Orissa coast tonite (7th.) near Gopalpur.
Due to interaction with W.D. winds, I expect the system to move North-Eastwards, still grazing the coast,, and initially pour heavy rains in W.Bengal and Bangladesh.
A storm surge is possible in Bangladesh over the next two days with high waves. Several ports, like Chittagong, towns and villages along the coast need to be aware and take due precautions after consulting local weather office.
Around the 10th. it will enter into NE Indian states as a low, and weaken very fast.
The SWM monsoon withdrawal position remains the same as yesterday. Would consider further withdrawal from NE and south after this depression dissipates.
By Rajesh at October 07, 2010