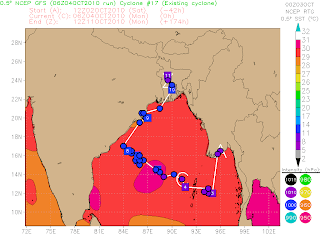 Bay of Bengal:
95B, the low now formed in the bay. Latest position is at 11.7n and 89.8E. The system is having clouding in its NE quadrant , at present.
The low at present at 1004 mb, is likely to deepen and move initially in the West-Northwest direction. It will approach near the A.P. coast, resulting in rains along the A.P./T.N. coast around the 6th/7th. Oct.
Later, due to an approaching W.D. the system will be diverted to the Northerly track. And with the W.D. moving eastwards, the Bay system will start tugging in a northerly track, to cross the coast of Orissa, or maybe even W.Bengal by the 10th. Of all the possible feasibilities, I find the one in the enclosed map most likely and favourable.
Arabian Sea:
96A is seen as hovering off the south Konkan coast. Like I mentioned for the previous low, observed today morning (Monday), I too do not read much in this low. It is a formation of convective heat, and will disappear by Tuesday. And the convective clouds are also seen off and along the Konkan coast. This is typical of a retreating Monsoon.
SWMonsoon:
The "aged" SWM is still precipitating rains below the 20N line. Heavy rains have been measured up in Ratnagiri, 87 mms, and Vengurla 71 mms, both in the Konkan. Goa received 41 mms.In the south Thiruvan. recorded 76 mms and Hasan 70 mms with Medikeri getting 62 mms.
Another 2 days, and vagaries may withdraw the monsoon from Mah.
In the regions of Rajasthan and Sindh in Pakistan, we observe a virtual heat wave ! The highest temperature in India on Monday was 40c at jaisalme

r. Bhuj went up to 39c and Jodhpur was 38c.
And the higheast in Asia today was at Nawabshah,Pakistan, where
the day shot up to 44c.!! The port city of Karachi was at 39c today.
International models show the pressure in the Rajasthan region falling to 1002mb in the next 4/5 days. Now this is a bit surprising, for if it does drop to 1004 mb, when normally it should be at 1008/9 mb around this time, this forecasted pressure development may not be too favourable for the setting of th NEM. In this case, the monsoon trough would be prevented from "jumping downsouth."
By Rajesh at October 04, 2010

There was rains on and off (with one heavy and windy spell) at the Vile Parle - Andheri area yesterday night from 8:45 pm till about 10:30 pm. There was hardly any lighting or thunder just plain rains.

Speaking of lightning and thunder there is a report of very heavy casualties and injuries from the Vidarbha region from yesterday's rains. I have never come across such large number of deaths and injuries in a single rain storm event (though spread over a large area). Quite tragic and shows that weather prediction and warning is still many years behind in India coupled with the lack of knowledge on what to do (or not to do) in a storm of heavy intensity

Mumbai.South Mumbai here had similar rains from 9pm till 12 mid night, of and on, but with lightning and loud thunder, specially from 10pm-10.30 pm.Wasn't this predicted by Vagaries ? -;)
And yes, for Vidharbha, it is north unexpected to expect thunder showers with severe lightning in these regions, around the time of monsoon withdrawal. Monsoon still on in region below 20N.

sorry for the mistake- read- For Vidharbha it is not unexpected--

Very unexpected as the ingredients were not complete for Severe Thunderstorms here. Even I woke up at surprise in afternoon 1530hrs when some bolts hit skies in Nagpur
I had mentioned about Cloud cover but convection was out of course
We need to get a Doppler radar here

Check this to get more technical on 96B

Rajesh, it's been raining in Andheri since 4:15 pm, it got dark very suddenly - infact the office suddenly turned very dark taking us all by surprise. Although the rain is moderate now it's quite dark and looks ominous at this point. At this point (4:40 pm) there is no thunder / lightning 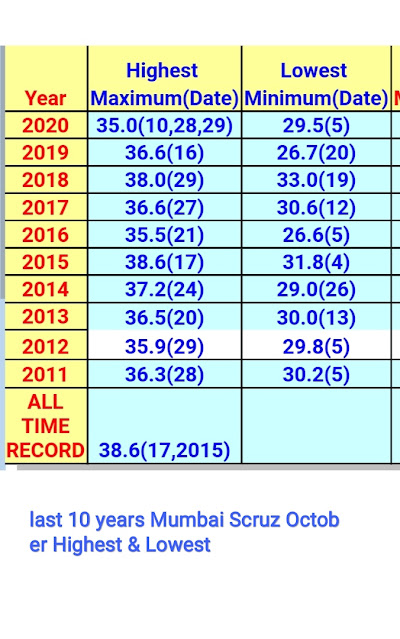