The arrival of the remnant low near Mumbai, has brought very heavy rains in South Konkan and Goa. On Sunday/Monday, Rajapur (S.Konkan) received 210 mms of heavy rains, and Harnai got 92 mms. Several palces in Goa recorded between 5-7 cms rain.
Due to prevailing moisture, Madhya Mah.regions will see thunder cells popping up in isolated patches for the next 2 days. Konkan rains will return on Wednesday 20th./Thursday 21st.
Mumbai city received light to medium thundershowers, of varying intensities in different areas, on Monday evening and into the night.
The remnant low over Mumbai decreased from 1004 mb to 1006 mb by Monday evening.
But it was enough to garner up moisture and precipitate rains along the North Konkan/South gujarat coast on Monday.
Though I expect the low to be temporary, and fizzle out by Tuesday, we see another pulse aloft, at 700 hpa tracking west and settling over south Konkan 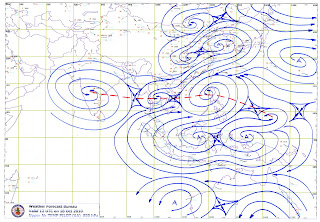 by Wednesday 20th./Thursday,21st. October. Simultaneously, on the 21st. as per IMD/GFS forecast, we see a trough dipping into the North Arabian Sea region.
Mumbai can expect some rainfall on Thursday 21st. Oct.
City Forecast on Mumbai Page.
By Rajesh at October 18, 2010

A heavy thunder cloud with tons of lightning is visible SW of Mumbai in the Arabian sea. Looks like the 'Low' is stubborn and won't fizzle out so soon after all.

By the way what has been the latest official Monsoon withdrawal date from Mumbai? The IMD still maintains SWM till 21 degrees North (though I agree they have completely lost the plot).

I personally can't wait to leave Mumbai for 2 weeks during the Diwali time, am off to Jaipur first and then to Europe (brr.. it will be cold there). Can't wait to get to more sunnier, drier and cooler locales!!

Spotty Lightning and thunder already showing now along the coastline from Valsad to Ratnagiri. Mumbai will get another storm today. Be prepared.