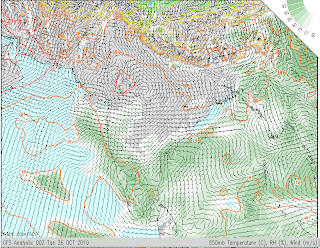 Conditions and synoptic situations show a marked "improvement" in the withdrawal process of the SWM. Anti cyclone formation has covered a vast region of the Northern Peninsula region, and strong easterlies are now sweeping the region up to N.Karnataka areas. Changes in wind pattern are visible in the 200 mb jet streams, specially in the Southern Peninsula.
Vagaries predicts the SWM to withdraw from Karnataka and A.P. by 27th. October, and NEM setting in along T.N.coast from 29th.October.
But, as mentioned earlier, NEM may take another week to actually pick up strength. Current may be weak initially.
Temperatures as on Tuesday, 26th.October.
Highest in Asia: 42c Makkah.
Highest in India: 39c Palayamkottai.
Lowest in Asia: -38c Ojmjakon (Russia).
Lowest in India : -16c Shyok (Ladakh).
Lowest in the plains of N.India: 11.4c Adamur (Punjab).
Lowest in Guj/Mah: 15c Udgir.
By Rajesh at October 26, 2010