Absolutely correct svt, no model had forecasted rainfall in excess of 50 mms. vagaries had put up max. of 35 mms, and reconfirmed the same yesterday. A sudden gush of moisture, towards the UAC, in a belt stretching from Mumbai in the South to Vapi in the North was the reason of the heavy fall.
But, these are the Vagaries of the Weather !
During the monsoon, narrowing of sea level isobars, and very narrow streams at the upper level of 850 hpa, could cause a sudden rush of moist winds towards a system. The off shore trough gets activated.
(Nuwe weather map) 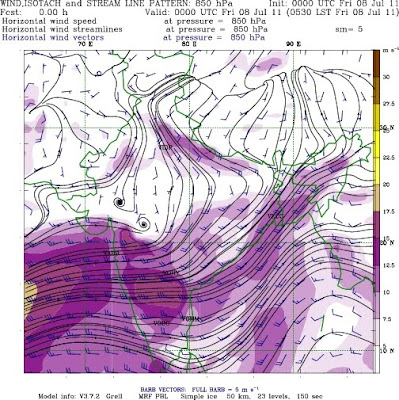 As soon as the isobars distence widens, there is a sudden lull in the gush ( decreasing winds).
Most of the models had predicted the low (BB2) to move from the Bay into M.P. and then fizzle out in Rajasthan. Some models predicted the low to become an UAC and move into Gujarat, while a single model had estimated the low to move NW.
Another had estimated the low to become an UAC on crossing land.
While some had predicted no low at all !
On these basis, various international models calculated the rainfall path from the east thru M.P. Some estimated up to 50 mms of rain in North Konkan, and some as less as 20 mms. All on the basis of the system taking the normal path, and winds rushing into the system, in the N.Konkan region.
Vagaries' estimate was based, as explained often, on the calculation that the system would fizzle, become an UAC, and fade away in Gujarat. Hence precipitate 35 mms on Thursday in Mumbai. All this happened, with 80-170 mms in Mumbai !
Though most parts of Mumbai received very heavy rains thru last night, surprisingly, as per the AWS stations put up, places like Nana Chowk and Worli received as little as 35 mms. compared to 168 mms as the highest at Colaba.
By Rajesh at July 08, 2011

@ganesh..where did u get your figures from??Btw its been raining heavily in deonar since morning...kind of trumps 30mm forecast.... :D

yestrday it was very rainy at panvel also, easily the rain amount wud be more than 10 cm atleast!!!!! And now in the morning it is raining damn heavily !!! Luks like another 10+ cm day !!

@Rajesh I checked numerous websites yesterday no one was expecting this kind of rain. This season so far everyone getting it wrong than usual. Something has changed.....

there is hardly any wind or absolutely "calm" according to mumbai airport metar reports. what does this indicate? shouldn't there be a strong sw wind?

This looks awesome for mumbai more rain on its way.

Looking at latest Sat image... looks heavy rains over next couple of days.
PS: I am just reader and not by any means even an amateur in predicting weather.

Hey Could u comment on the low pressure u predicted on 11th??

not much of rain in thane too....rajesh how come so much of difference in rain between two suburbs...?