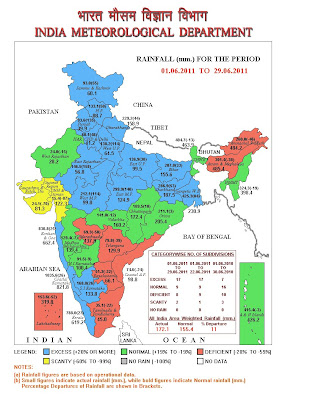 On assessment of the SWM till 30th June in India, we see from the map the spatial distribution.
Overall, SWM is +11% as on end June.But, there are a few worrying regions. 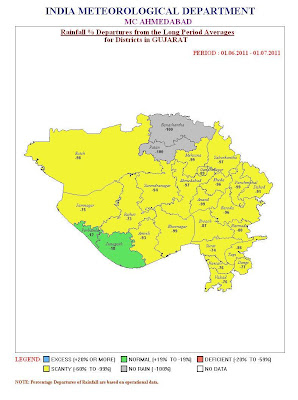 The worst hit is Gujarat. And specially Kutch and Saurashtra regions. A number of stations in Kutch are yet to receive even 1 mm of rain.
Worrying is Saurashtra and some places in South Gujarat. Anand district, and all the places in the district have not got a single mm of rain. Saurashtra is reeling, with many places yet to open their mark. Here too, many stations are with 0 mm till June end. Worst are Amreli, Bhavnagar, Rajkot and Surendranagar districts.
The coastal regions of Porbunder are a little better due to AS1.
Ahmedabad, Anand,Sabarkantha, Mehsana, Patan and Banaskantha districts too are reeling under dry conditions. Not a drop of rain, and the highest rainfall amongst all these 4 districts is in Ahmedabad city which got 12 mms in June ! Patan and Banaskantha show 100% departures.
Vadodra is also amonst the driest, with the city itself measuring the highest rain in the entire district at 14 mm in June.
Bharuch district is a little better, though far below the normal mark. Bharuch city has recorded 52 mms in June, Vagra 33 mms and Ankleshwar 32 mms. Jambusar is still to open its account, though June is over !
Overall. Gujarat State has received 3% of the total monsoon rains it receives till end September !

Ananth,Today, the trough line is in "position 1" mentioned in blog dated 27th June.
I would stick to my forecast published on 29th June. MJO phase regaining, and break monsoon conditions over by 5th/6th July.
Please refer to 29th June blog for full forecasts.
as of now, no changes.

Rajesh, you have uploaded the old list which is only upto 12th

It is the only place in the country which has got continuous rainfall from June 2nd non stop. Whether monsoon is weak or strong.

Thanks Pradeep.Sorry guys, the correct list is up now !