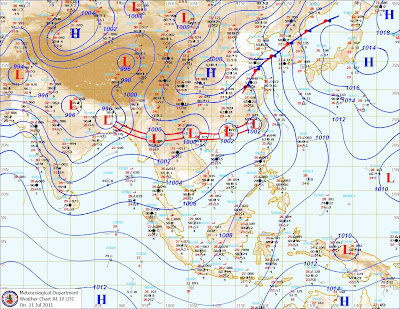 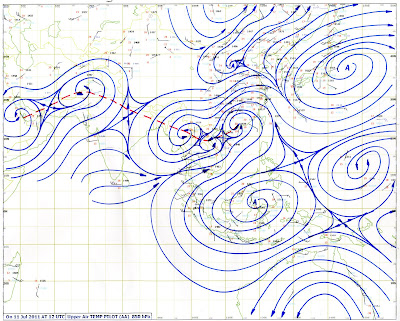 In fact, the upper tropospheric trough has also shifted North, and is almost aligned with the sea level trough (See Thia Map). As this (upper) line moved away North, the prospects of the Northern end of the west coast off shore trough strengthening diminished on Monday.
And alongwith the axis line, our forecasts also oscillate ! The fortunes of the off shore trough now hangs on the behaviour of the monsoon trough. Infact, on Monday,11th, the Northern end of the off shore trough vanished, and a ridge is seen in place! Another 24/36 hrs, before this ridge reforms back into a weak trough.
Since a low (BB3) is expected to form in the Bay by 12th or 13th, I expect the monsoon trough to slide down as soon as this (BB3) is formed.
Renewed rainfall for Mumbai once BB3 emerges, sea level trough moves down, and off shore trough reforms along the N.Konkan coast (in that order -:).
As mentioned earlier, the upper air trough was expected to move its moisture into the Sindh coast from Monday. But, as the "parent" body has moved North, Karachi's wait for rains is prolonged by a couple of days. An UAC (at 700 mb) has formed over Gujarat. It is precipitating heavy rains over the state on Monday.
N.Gujarat, Sabarkantha dist: Bhilda 180 mms, meghraj 170 mms and Wakaner 166 mms. More rains are expected along the Baroda/Ahmedabad region. Heavy rains could be the scene in Dahanu regions of N.Mah.
This, as a system.is expected to move west in the Arabian Sea, West of Okha,Gujarat around Wednesday, 13th. Hopefully, Karachi and the Sindh coast can get some precipitation from this, though by then, it will not be heavy.
The ENSO-neutral conditions are present across the equatorial Pacific. Since some atmospheric circulation anomalies still reflect aspects of La Niña, international models estimate a possibility of a return of the La-Nina by September 2011. But, only 33% of the various models estimate a return of the La-Nina event.
Too early to judge impact on SWM .
In fact, I feel, SWM will be out of it, and the NEM impact could be studied at a later date.
By rajesh at July 11, 2011

Rajesh Mumbai is having good rains since last afternoon 5.00 pm and overnight.