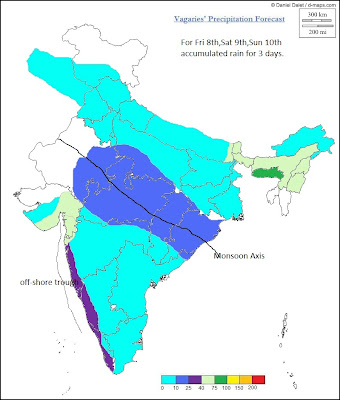 BB2 as a system has almost faded and exists as an UAC in the western region of M.P.
A decrease in rainfall from Friday in N.Mah. and Saurashtra areas of Gujarat. The Vadodra, Surat and Bharuch districts of Gujarat can receive heavy rainfall on Friday.
The above map shows Vagaries' estimate of Fri/Sat/Sun accumulated rainfall. The monsoon trough is in its normal position, so rainfall is expected along the line. Off shore west coast trough will bring rain along the west coast, around 40-50 mms in next 3 days.
The easterlies blowing north of the axis are likely to bring in moisture and nominal rains in the region shown, including Nepal.
These winds can blow some rain into Northern Pakistan areas.
Sindh region is expected to be dry and hot, with the hottest possibly reaching 45c.

Mumbai: Wednesday/Thursday was wet and frequent showers pushed up the total by about 40 mms in the last 36 hrs.

Friday will see some showers, heavy in the day. But the rain is not expected to be prolonged, and a decrease in the evening and night. Rain amount 20-25 mms.

Pune: Will be cloudy on Friday with sprinkling of rain . Saturday can see a few showers, some quite heavy in areas. Sunday will be cloudy to partly sunny.

i hope there is some rain in Pune and surrounding areas, its interesting to see interior maharastra got decent rains keeping ghats and coast relatvely dry , is it typical of UAC ?

are u sure about the low pressure on 11th...most of the weather forecast doesn't show a low forming then....