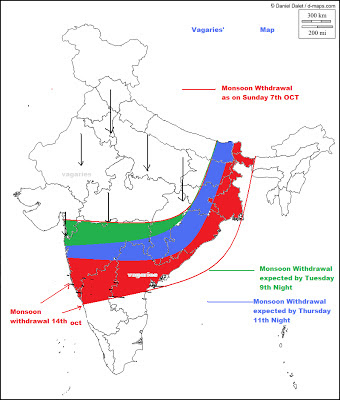 As on Sunday, 14th October, SWM  Retreats from Maharashtra, NI Karnataka, North AP, W.Bengal and all States except the NE.:

The sea level High pressure is weakening over the Bay, and reverting to "normal" pressures" again..Chennai can expect NE winds from Monday/Tuesday...SWM will however continue to precipitate rainfall in SI Karnataka and Southern TN and Kerala for the next 2 days, Monday and Tuesday.

A WD (O-1) will show its presence over Northern most Pakistan and North Indian States of Kashmir/HP by 15th October, Monday.
Precipitation could be expected in the Northern hills of Pakistan (with snow higher up).

Rain will occur in Kashmir, with possibily first snowfall in Gulmarg and Pahalgam and other similar level stations. HP too can expect rains and snow on the upper reaches.
Cloudy to light rains in Punjab and Haryana on Monday and Tuesday.

O-1 will move away NE away from the sub-continent from Wednesday, not having any effect on Nepal. Kathmandu will be dry for the next 2/3 days, with temperature range between 25-12c.

Delhi NCR will be partly cloudy, with rise in night temperatures for the next 2 days.

Mumbai will be dry and warm, with the day temperature at 34/35c. Tuesday night will be a bit cloudy (high clouds), so could be warmer and stuffy.

The El-Nino event position was put up on vagaries early September for the September forecast. It was neutral then, and was forecasted to remain so thru September.

In fact, recent observations indicate temperatures in the tropical Pacific Ocean have cooled further for the second week in succession  Nino 3 and 3.4 are cooler by 0.2c. SOI and tropical cloudiness have remained at neutral levels.
The chance of El Niño developing in 2012 has reduced over the past fortnight.

The latest SOI value to 7 October is 0.7. Climate models surveyed by the Australian Bureau of Meteorology suggest the chance of El Niño has further decreased.
The current Indian Ocean Dipole (IOD) index is +0.6 and falls within the neutral values. Recent model forecasts predict that the positive IOD will weaken during October.

Both of the above events should spell out and indicate a normal precipitation for the NEM season. If at all, a borderline El-Nino, would hint at a slightly above normal rainfall for the Southern TN regions.

The weak phase of the current MJO ends from the 16th of October. Bay gets active and buzzing from next week.
The MJO achieves a strong phase from the 22nd of October, enhancing chances of increased Bay activity... possibly setting the stage for the NEM to advance....

A possibility of a low by around 20th-23rd October is possible in the Bay. This system could also cross the Southern peninsula thru TN or Karnataka and could be the reason for some cheering up with enhanced rainfall in the interiors of the 2 states.

Great News Rajesh!!. Active phase of MJO is very much required considering the failure of SWM in both these states.

Today it is raining cats and dogs in north bangalore.

shitij: your query on fb..no, there will be no system in Bay..BUT, as i have mentioned, the Low from Bay can pass thru the Peninsula. So we will have to observe if it crosses into arabian Sea or not...very little chance, but lets see...

Before on set of NEM, depression over south Indian ocean (-20 degree latitude) has taken bulk of moisture laden clouds and now WD over North India- will this oppose movement of NEM winds?

Bangalore average total rain yesterday is just 20mm. City needs atleast 500mm more to get an average of 800mm - now it is just 300mm since june. and many places in SE KAR are in 100-200mm range. Apart from this TN rain very much required as majority of places are still with 0mm since june.

Today no fog in Badlapur but having cloudy sky.. So min temp here is 22.7 C.

Good rain in bangalore from last evening. It rained overnight as well.

A terrible freak year. Next year we should be hopefully back to 90-100 cms range.