The UAC which was NW off Mumbai has fizzled out, and is almost non-existing.

The Monsoon withdraws from the regions shaded in Green on the map below. It withdraws upto the 19N line on the West Coast.

Mumbai City will get  foggy morning in the outer suburbs and city will be warm, with the day touching 33c on Tuesday.
weak thunderclouds from remaining moisture over the ghats in the Eastern sky by evening. Not expected over city.

Outer townships may get light drizzle in the evening from a weak drift from the East side.

As the SW Monsoon retreats South, we may expect some thunderstorms in S.I.Karnataka and adjoining TN, more along the 12N line.(Bangalore falls on 12N)

The stage wise withdrawal of Monsoon and axis movement as per vagaries is shown in vagaries' map.(Prepared on 7th October) 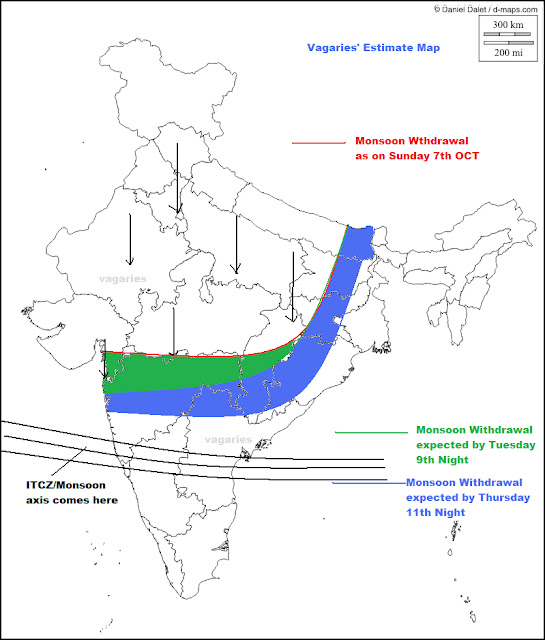 Besides many parameters, the wind shear (Penn State Department of Meteorology chart below) showing stability is the strongest parameter favoring the projected retreat.

@rajeash ,abhijit,emkay,gsb,its an irony tht imd mumbai is putting 1cm for yesterdays rain figure for panvel!!it poures for 40 mnts in the spell yest,,nd the rain rate was very heavy!! Even at 8 pm in the other spell it poured for10 mnts,,nd in the between the pouring thr was ample of prolonged spell of moderate rains also!!yesterdays figure wasnt even reported ,!! Now i came frm my collg to panvel,,its raining moderately here,,@abhijit ,,ths is the 8 th tymm m getting wet in october,,panvel has had 8 rainy days for the month of oct,,btw thunder sounds r like crackling bombs!! Very frightening

really very frightening thunder easily the most violent one ,,although the rain rate is not tht high!! M really scared

rainrate has incresed now nd ppl in khanda colony new panvel west r running as if sum earthquake has comee,,i wish i cud measure the sound in decibels,,coz its too much,,its raining heavily since 5 mnts wid violent thundering i wud say

rains started midway from manasarover stn, heaviest rains in khandeshwar upto khanda colony, but weak rains new panvel east but the lightening on the east side compensating for lack of rains, vagaries indeed, wondering the direction of cloud movement was it west to east ?

@ Junaid @ emkay & Rajesh sir. You all are very lucky enjoyning daily rains at your place. But Badlapur continous on 3rd day also remains dry its very irritating for me !!! Just heavy lightening and bit thundery from south end..

no rain or wind at borivali. but the southern sky is getting "orangish"..

What is happening over Badlapur sky or what localized changes are happened here as from past 3days not a single rain drop at all ! Really GOD only knows it now ! And now Monsoon almost to end !! So 5 OCT WILL BE LAST RAINY DAY OF BADLAPUR !!!

well abhijit that are the "vagaries" of the weather!!

thunderstorms and rain and winds gusting at 50kmph+

Today it seems Thane is sharing the same fate as Badlapur.. no sign of any rain... no thunder.. can't make out the condition of the sky from inside my house.. Junaid/Emkay and Rajesh sir still in monsoon territory !!

I am watching from past 3days that instead of thunder heads developing near western ghats regions they are getting develop over Matheran range and straight moves towards west that is towards sea. So in this process only Panvel, Navi Mumbai & Mumbai regions are benefited as they all fall on same track of storm traveling.. And Badlapur in North of Matheran is kept aside !!

I think UAC / Low of Arabian sea which is moved more west in deep sea is all responsible for all this ! So all thunderstorm heads are just in rush to go in sea and Get attracted towards UAC. So Badlapur is missing all activity ! All above reasons are just mine consideration..

abhijit, there is some development NE of matheran according to the latest radar (close range) image...

Also seen from past 3 days that rains are more in Coastal belt of Konkan coast than in interior Konkan !

Abhijit dont be so upset, havent u recvd enough :) its all quiet in Panvel now, todays attack was to screw poor commuters reaching home at peak hour !!

@rajesh i too feel today's may be last, when i left office did not feel will get rains today, but by kurla humidity levels were increasing

abhjit, are you seeing lightning southeast from badlapur?

@ Emkay not much upset but trying to explain myself that why this must be occuring so I expressed mine angle via comments thats it.. Yes, Badlapur had good monsoonal rains as I measured 2909mm from 1st June till 30 Sept.. And 140mm from 1st Oct till 5 Oct period. So total rains here are above 3000mm mark now with 3049mm for year 2012 .

@ Tejas. Here its continous inter cloud lightening from 7pm onwards only. But no winds and very sweaty at moment.

Source: Dept of Agriculture,Govt of Maharashtra and IMD.

only wind and lightning , but no rain, here at vasai.

Rajeshbhai, the SCZ figures should be higher than 0.2 mms. Heavy rains here at Juhu from 8:30 PM and extremely heavy for 15-20 minutes around 9:00 PM lasting till 9:30 PM. Also, I echo the Lightning and Thunder comments, really loud thunder claps today.

I think again rain may approach Panvel ! As Badlapur just had 5mins drizzle and radar showing it will be crossing Matheran soon !

U r spot on Abhijit, Rains started again at Panvel at 10.10 PM
Its moderately heavy without lightening. But DTH signal has gone for a toss indicating depth in clouds.

Rajeshbhai, Abhijit, strange rain pattern if you ask me looking at the radar. The rain in the evening and currently seems to be going East to West in a very narrow corridor. The rest of the region looks to be dry and even cloud free at this point. It's as if some micro weather pattern is causing this rain.

Todays behaviour and cloud formation/movement pattern show it could be the ultimate this season..

AS THE MONSOON SHIFTS ITS GAZE TO THE SOUTH
EXPOSING THE CITY TO BLUE SKIES AND THE BLAZING SUN
THE SANDS OF THE NORTH AWAIT THE CHILLY WINDS
ONLY TO GIVE WAY AGAIN TO HOT SUMMERS AND THE MAGIC OF RAIN,RAIN AND .....RAIN.

Junaid: Panvel they said measured 14 mms till 8.30 am Monday...yesterday was 65 mms (corrected figure)..i agree with your report and maybe there will be some correction..

Now as per latest radar.. Again 3rd thunderstorm have developed exact 40kms East of Badlapur. Lets see what is store for us..

@rajesh ,,then tht 14 mm figure shud be corrected to 70 -80 mm( according to my approximation by comparing yest rains wid saturdays figure of 65 mm) coz yesterdays rain was more intense than saturdays rain,,nd if we add ths figures nd todays figure also panvel must have received between 23-26 cm for the month of october!!

@ Junaid. Yes correct that hillside waterfall flowing rapidly in just 40mins heavy rain spell is enough to say ! Even I have measured 140mm rain in just 5days thunder storm rain and if last 3days if it would have rained in Badlapur then here also it would be around 250mm easily..

It's seems Bay low has moved WNW direction and entered Orissa and Arabian UAC remanant which many international models showed it will travel SW of Mumbai. So now sat image showing parellel to Goa in far deep sea. Today morning Badlapur was having very less fog. So visibility was more than 3kms.

SOME WEATHER INTERNATIONAL MODELS ARE SHOWING RAIN IN MUMBAI TODAY AND TOMMOROW SHOULD BE THE LAST ONE.

Heavy rain in bangalore this morning. It rained in JP Nagar for 20 minutes this morning from 8.55 to 9.20.

RIGHT NOW AT 10.50 AM , its very cloudy in South EAST. Appears like super rain in TN.
Thanks God some thing good is happening. Let it rain like mad all over the place. Water problem , river fight and god knows what else would happen without good rain. Only salvation is Rain.

good for u vijay at last the rains are there in bangalore,after a long wait, pray it continues .

Hope the rains in Bangalore and other places in South India make our friend SSET happy apart from solving other problems :-))

Indeed there was good rain yesterday in TN and south interior karnataka.

@ Rajesh sir:
What is passing us at the moment (OCT 9); its cloudy, keeping the temp on the lower side; it it a WD? What's the forecast for the coming few days?

Neeraj: what eastern Nepal is getting today is the rushing in of moisture from the bay low. expected the bay low to move thru W.Bengal (read post0, but it has hit land over Orissa.The CMV shows the clouds moving North into Nepal. With the low in mind, i have kept the SWM pending in Eastern Nepal till Thursday,please refer map put up yesterday. I was expecting your query, as to why the SWM is still shown in Kathmandu region -:))

Just made that up yesterday. The temperature and humidity is becoming more volatile causing sudden shift in moods and was just going thru a high point before it collapsed !! Apologies to the real poets on VAGARIES .... !!!

As given by GSB -> from oct1 - oct 8, maximum rain was over almost all places of MAHARAHSTRA - highest being 600mm!!! Excellent rains for Sangameshwar. Same period if we look at IMD charts Augmumbe,Kerala....totally dry. This last moments of surprise is just like recent UAC over RAJ/GUJ for 10days [end of september] which brought excess of rains.


GSB any such UACs for south east interior India?? Looking at BANG skies for endless time....What is your forcast for NEM? Will happen/not happen/TN-KAR will land in deep problem/it will be blessful..

at last the mumbai radar got updated. some activity south of matheran. how is it at badlapur abhijit?

that storm near matheran moved rapidly towards southwest!!

UAC\NEM and all that is something that you have to ask Rajesh sir, I am pretty bad at predicting weather....

Shall put up a note on the NEM and Winter conditions tomorrow...