In the last 6 hrs (since vagaries' report), BB-10, a deep depression, remained at 996 mb, takes another leap, and moves W/SW by another 55 kms, to 8.6N and 81.5E.It is just 50 kms east of Trincomalee, Sri Lanka. Later, continuing its track thru Sri Lanka, the system should strike Indian mainland at current strength in the region targeted by vagaries . But peak winds constant at 35 knots (in the West and Southern sector).....
Vagaries track projection has remained unchanged since the last

Chennai will get windy weather and frequent rains on Tuesday Gusty NE winds at 40 kmph. Rain amount 30 mms.(average)
Wednesday will be overcast with frequent thundershowers. Rain amount around 45-50 mms. 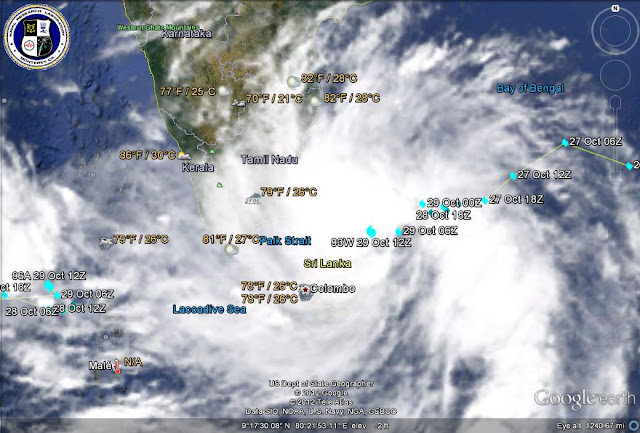 BB-10 almost stationary, having moved just about 10 kms due west..South and SW quadrant show maximum winds at 35 knots, while west and North show 25-30 knots...clouding thick in West and South sectors...
AS-2 also stationary and at 68.9E, shows no signs of deepening yet..


Posted @ 9.00 am Monday:
BB-10, depression, and getting deep, is now at 9.6N   83.7E, almost stationary since our last report ( Yesterday, below), as a depression at 1000 mb and getting deep. Just East off the Northern tip of Sri Lanka, it will move along the projected track and hit Central regions of Coastal TN, near,  Sivaganga and Ramanathpuram,  as a deep Depression.
Coastal regions of TN will be gusty with 35-40 knts winds and Chennai as expected strong NE winds.
Peak of the precipitation will be in central TN with some places getting upto 12-15 cms and maybe 18 cms in the odd place. 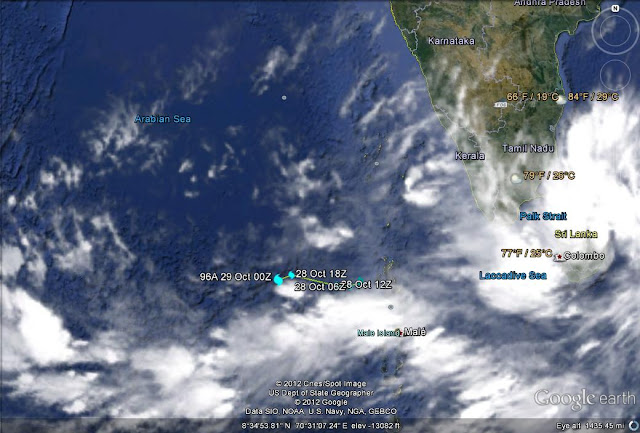 BTW, the trough from O-3 is expected to push deep into Central India by tomorrow.

very true rajesh sir ,
these systems in the sea's can change their route anytime ,and can track anywhere as the winds take them. looks like ,bay circulation also has changed its track.

sorry rajesh sir, what i meant was the bay system also looks like its going to take a change in its direction , instead of travelling inland n then towards the west

Some spiral clouds reaching in South Konkan now. So are they are coming from Bay low ?

It seems that the bay system is tracking NW direction...

Cmdr Potey: I would say rains in Western vid and Marathwada from ,say, 1st November, for a couple of days. Due to the same reason as explained in blog.

abhijit: If you see the cloud motion vectors image, you will see that the spiral over konkan is def. from AS-2..

Rajesh sir
are these 2 systems going to merge with each other ,are there any chances of rains over konkan including mumbai . with the effect of AS-2.

but rajesh its seems quite strange that only the IMD charts shows AS-2 whereas the other international charts doesnt even have a hint of it.. the whole AS seems to be quite normal as per their charts......

Rajeshbhai, thanks. The crops are standing and ready for harvest i.e. Moong etc. One more problrm...posting a comment is getting tedious ..the alphabets are to jumbled and difficult to recognise

@ Rajesh Sir. Thank you for guiding. Last night only we discuss that murjan thrown spiral on first day but AS- 2 not. But today shaping nicely started to through spiral clouds now . So now direction of tracking still you maintain NW ? Or due to Bay influence system moving more near to west coast now !

BB-10 is not producing expected widespread rains of 300mm-400mm, like UACs over Maharashtra and Rajisthan.Seems only 1-2 places over coastal TN got 100mm of rain.
Bangalore as now very sunny. All hopes on BB-10. We need this low to remain in-place for atleast few days and not vanish into AS.

sir any chances of O-3 bringing rain to Delhi-NCR?

arpit: O-3 as yet is precipitating rains in Dubai...as of strength now, the effect will be upto hills, and maximum Punjab plains. But, 1 chance of strengthening is the trough from O-3, which may attract moisture from AS-2..lets wait and watch

Now some weather models even showing no rains for Mumbai ! And surprisingly drop in min temp too for Mumbai up to 18 C ! And rain taking route of Chennai to Hyderabad to Nagpur and deviating NE towards Orissa, Bengal !

So really WD effect coming so down up to Central India till Guj, MP ! As some model showing drop in min temp for Mumbai and no rains reaching Mumbai instead deviating to NE over Vidarbha region from SE Maharashtra !!

i think you guys should also track sandy hurricane.... lots of action there as well...

And really temp dropping here in Badlapur. Its 22.7 C temp outside at 10.30pm itself with very clear skies so already chilly here . So tomorrow morning Badlapur will experience 19 C at 6am ! If no cloud appears in morning time.

Otherwise till yesterday it would be 25 C at 10.30pm and in morning it would reduce to 21 C here.

Hi everybody!! Back after a gap of few days !! Home PC inaccessible due to home renovation. Using my Tab to access..

Abhijit, you are lucky to talk of 19 c temp !! Here at Thane the min today was 25.5 c in the morning for a few minutes and then quiclkly shooting up to 34/35 c by afternoon. And today with the cloudy conditions that made the situation even worse...dull and dreary.. miss the first two weeks of October..

Yes. Lets see what is store for us. Till Pune and South Konkan confirmed rain but Mumbai still 50% chances only as per current conditions ! Now spiral clouds seen over whole AP and few crossing into Maha border also. So this spiral are sure from Bay low now.

AS-2 is abt to fizzle out in the arabian by weekend, and BB-10 will track NNE, SO mumbai will not experience any major rainfall but may be few scattered showers , some places.Overall it will be a hit n miss case for mumbai.

Puneet: some maps are still following the old track of the system which could have brought heavy rains in mumbai, but unfortunately the track has changed n weather has cooled down in mumbai.rains are very unlikely in mumbai . tommorow should make things look even clearer.hope mumbai gets some rain .

sam: BB-10 going NE ?? what are you saying ? Its going west into TN.
After that it fizzles out..not sustainable..dont go by the forecast models (if i can advise), they change like a chameleon. Be sure of yourself.
dont you think vagaries has been quite constant..at least i try my best..one has to put up the most probable calculations initially itself. Many changes in forecasting is misleading and makes you loose your own confidence.

see, you have now understood abt AS-2 also...it cannot sustain.

Badlapur got chilled today with min temp dropping to 17.7 C @ 6am today.

Condensation on car & bus windows and roof. Leaves of trees and grass also condense with water drops falling on ground. Dew point must be 8 °C here . With Humidity around 40%.


Many peoples who are catching local trains from Badlapur for their job in Mumbai also discussing that today very chilly(cold) start for the day so seems winter started now !

Amoung all confusions/chaos about haricannes(Sandy), BB-10(depression), AS-2 - would be interesting to see who is going to give maximum rain (wish it is for south India/Sri Lanka). Wonder US guys make huge news about Sandy Superstorm - India encounters much bigger Mumbai-1000mm rain in 24hours, Orissa SuperCyclone.

By the way after tree cutting,lake draining,garbage,bird flu - Bangalore has its latest fashion addition - "RAT FEVER"- required "piped piper of Hamlien" as per todays Bangalore Mirror

the coverage on this depression in bob has been poor in indian media..infact there is more news on sandy than this..only this morning do i see media channels flashing this news..wonder y so late..

there is a definite drop in minimum temp in mumbai..was a bit chilly that normal...