Bandhavgarh Pics on Link alongside..for those interested only..
Heat Picking up....

With M1 now showing its back, we see the heating in the Northern plains taking shape.
Vagaries had predicted high temperatures from Monday, and this day showed, right away, a 45c at Ganganagar. The first 45c in India this year.
Various cities in the North are showing readings of 42-44c today.
In Pakistan, it Larkana and Mohen Jo Daro topping 48c today.(Recall, Mohen JO Daro touched 53c on May 26th 2010).
Night temperatures are getting hotter, with Kota showing a minimum of 33c on Monday morning. Coming days, nights, we shall see more minimums in the 30s ! 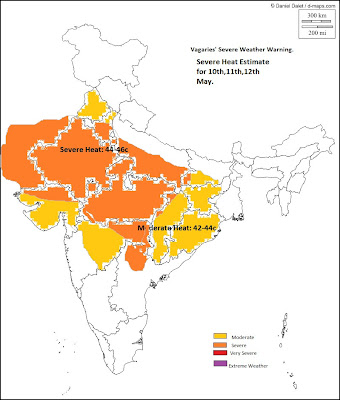 Meanwhile, we see strong NW winds blowing across the plains of Northern India next few days, which may see the mercury rise further. New Delhi can gear up for 45c, and maybe some Rajasthan cities may head for 47c by Wednesday !Possibly this heat will be creeping into Vidharbha regions next 48 hrs.
A feeble M2 has crept in into Northern Kashmir. Not expected to have any significant effect on precipitation in the North. But, Next 2 days, we see M2 getting stretched due to strong NW winds,and forming a trough, almost at 998 mb, running along the Himalayan foothills. A trough will stretch from Northern U.P. into the plains of Nepal from Wednesday thru Friday, 11th-13th May.
Its eastern end is likely to attract moisture from the Bay and precipitate fairly good rains in the NE states, Sikkim and eastern Nepal regions these 3 days. Kathmandu, presently getting good showers, and will continue with these as the trough, extends eastwards from western areas of Nepal.
Next few days, I see a retreating MJO wave in the Northern Indian Ocean region. Covering the Arabian Sea and Bay, I see decreasing rainfall in the Bay, and the Bay Islands. In fact, very little rain is seen in the Bay Islands from 11th -15th May.
Retreating MJO and a eastwards pulling feeble (W.D.) trough will drive the upcoming rains eastwards into Myanmar, instead of increasing intensity over the Bay islands.
So, a delay in the SWM coming onto the Bay. Maybe after 16th now.
Shall go in details in the next MW.
Visualising some changes, I think MW - 6 should be put up soon.... on Wednesday,11th.
By Rajesh at May 09, 2011

felt strong Soutwesterly winds in South Mumbai this morning, are the winds already aligning now as a precursor to the Monsoon season ??

no..Mumbai will continue to face NW winds till May end..