A core is seen in the central regions of Sindh at 1002 mb. A bit better than the last assesment, as the eastward pulling has stopped with M2 running away. The pressure at the southern the tip of India, is at 1010 mb. The gradient is being gradually created. A full fledged difference of at least 14-16 mb is required to "pull" the SWM into the North.

With the anticipated heat wave from tomorrow, 17th, (see Vagaries map put up yesterday),this parameter may get going next week.

The South -West winds in the Southern Arabian Sea seem to have tapered a bit. From my last report, when they were speeding at an ideal 30 knts, they seem to be below that now.The wind chart shows the maximum gusts in the Northern fringe of the clock wise rotation (around the high) in the Arabian Sea, and near the Somali coast.

They better pick up and come back to 30 knts at least, to enable the SWM enter Maldives around the normal date. 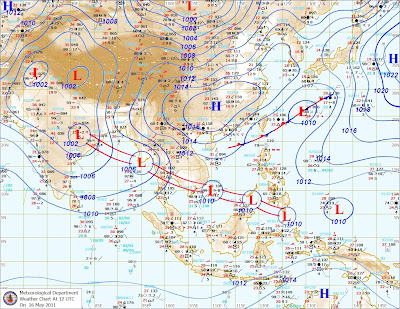 In the Bay sector, SW winds are geared up, but lack speed, as they are still below 20 knts. An embedded low is now fixed in a weak trough running across from East India thru SW Myanmar in a SE axis into Thailand. An eastward movement of a "in situ" low from this trough is awaited to trigger in the SWM into the Bay Islands. Conducive SST in the Bay is need now. Currently, the waters are at 29c.

ITCZ runs along the equator. Indicator: +veThe wind map shows the ITCZ along the equator stretching from Africa upto the Bay of Bengal.This parameter, the line, should move into the 5N region around the South Arabian Sea to carry the embedded Monsoon current along with it. Normally, I do not have doubts that this will hold up the advance, as in the Bay, the ITCZ is at 5N.

Conclusion: Now, with the first meaningful heat wave getting underway in the northern regions of the sub-continent, we can expect the seasonallow to develop and attin a core pressure below 1000 mb at a rapid pace. By the end of the week, say around the 22nd, we can hope to see 998 mb in the Thar Desert region.

And with a systamatic rise in wind speed in the S.Arabian Sea, SWM clouds could form only by the end of this week near the Maldives.

SWM could be expected over the Maldives by the 23rd of May.(Normal date 20th).

Kerala would be around 3rd June, and Mumbai could see the SWM season kicking off by the 10th of June.

These later dates are subject to change, depending on the fresh developments amongst the various parameters.

There are 2 deterrents !There is a W.D.(M3) coming on the 18th, and some heavy moisture incursion along the west coast is expected around the 22nd (due to strong west-southwesterlies).

I hope these factors do not become a "kill joy" to the anticipated fast developments discussed, and halt the +ve movements of the parameters.

Bay is still a bit un-organised. The trough mentioned across the Bay should give rise to a temporary low near the Bay Islands. Thereby, I would say the SWM may enter the Southern and Central Islands around the 21st, but, i feel, as a feeble current (in the absence of a stronger system).

Today i came across this interesting set of pictures from reuters , 'Ghost trees of Pakistan". Have a look, Please share it with others if you find it intriguing and worthwhile.