This Watch will evaluate the progress of the SWM advance, and its estimated initial strength. 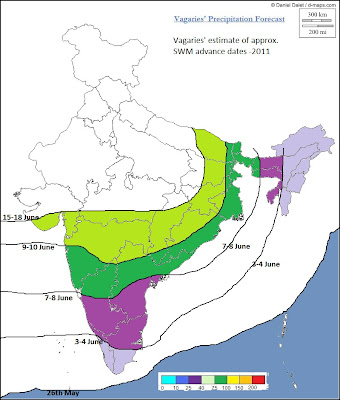 Looking at the synoptic situation today, 20th, it seems the SWM winds in the Arabian Sea and Bay sectors are hesitant, and not gaining the momentum required. SW winds over the primary destination, Maldives, are still below 20 knts, not enough to usher in the SWM. Normally, the date is 20th, but it seems the Maldives and Sri Lanka would get the SWM, albeit a weak force, by the 23rd and the 26th resp. And, I would not be too sure of its initial momentum and intensity, as the MJO wave in this region seems to be fading , and going into a weak phase from the 25th to the 4th of June.

The further current into Kerala would be "reluctant" to move ahead in a weak MJO. The MJO wave, for the Arabian Sea region is forecasted to gain inertia from the 4th of June. So, thru this wave, I would estimate the SWM to advance into Kerala around the dates initially estimated by Vagaries : June 3rd/June 4th could be the date for Kerala.

Initially, riding on a strongish MJO wave, the SWM could precipitate good rains in Kerala, and advance into coastal Karnataka 48 hrs from 4th June. Again on this wave, SWM could advance into interior Karnataka, Goa and S.Konkan by the 8th, and Mumbai by the 9th/10th.

Advance further will not be a hindrance, by the 15th, I would include entire Mah and South Gujarat as covered by the SWM.

Vagaries has put up a map for easy reading.

Intensity and strength of SWM in these regions will be good till the 23rd. After 24th June, a "slow down" could be expected, in precipitation in the SWM regions, and further advance.

The Monsoon forecast for June put up by Vagaries on May 7th, as MW-5 Part-2.... holds good.

Mumbai can expect about 650 mms in June this year.

In the Bay sector, SWM will start covering the Bay Islands from the 23rd, and subsequently reach the NE states by the 1st of June.

These are my personal views and for commercial decisions consult local weather bureau.

Thanks for the analysis, incidentally my brother is getting married on 26th June in Mumbai and we are all keeping our fingers crossed for things to not turn nasty (we all know Mumbai rains) around those dates. Your analysis does seem to indicate that post 23rd June there could be a brief period of rains letting up in Mumbai.

Busy time begining for you Rajesh very soon, with the Monsoons coming there is something happening nearly every day in India on the Weather front.

Hi Rajesh,
At this time what is a concern has been relative lull in Bay of bengal. Do you forsee any cyclone prior to monsoon , any thoughts on number of depressions in BoB in June. we have had relatively quiet 2009 and 2010 in BoB will the trend continue ?

Hey thanks for the analysis..just wanted to ask as to why it is so windy in mumbai today?Is it because of some disturbance in BOB??saw some activity outside vishakapatnam

@anonymous. Well, 26th is just about on the border date. MJO tends to get wek around 23, but it could be give and take a few days.
@Ananth. I have mentioned in the blog of MW-7 part-2 on May 7th abt the no of systems. I think i'll stick to that today.
@ron. These winds were expected. You must have read it in the last Mumbai forecast. "SW winds prior to Sunday would bring in clouds and moisture". Not connected with 97B in bay.This Mumbai condition was forecasted.

Brilliant job rajesh, without doubt the best weather blog in subcontinent. (better than imd ever will be) How much will be the intensity of pre-monsoon shower starting from 4th june.

lightning activity going on in deonar since 7:30pm

@svt. Thanks for reading and contributing regularly to Vagaries.
Pre Monsoon showers are very un-predictable , and can vary from region to region (within Mumbai itself).They may start with Thundershowers in suburbs, or in south Mumbai, or both.
But after a few days, around 6th, there could be sharp heavy showers.