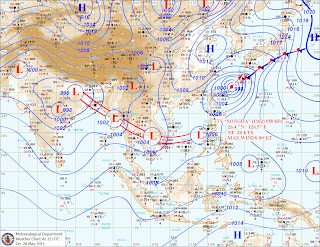 Seasonal Low: By not deepening further, as is expected by now in the pre-monsoon days, the seasonal low seems to be staggering. The central pressure is today at 1000 mb. The gradient is weakening, and is required to get steeper in the next 2/3 days.Result of lower day temperatures in the northern plains last 3 days.The culprit ? M3.
I would not worry much on this count, as days will suddenly heat up from Sunday. (Though M4 is expected by 31st May).
A trough running down the eastern coast of India will be a fore runner in pulling up the SWM in the next 24 hrs to cover the Bay Islands, and, with the SW winds picking up there too, a larger
area of the Bay will be covered.
With the trough re-forming in the eastern regions, I expect the SWM to pull up in the NE
states around 2nd/3rd of June.

The cross equatorial winds are getting stronger off the Sri Lanka coast. Vagaries had advanced the SWM in the western and southern areas of the island on the 26th. See Sat Image .Now, with the SW winds crossing 30 knts today, the SWM can be expected to cover the
island by the 29th. 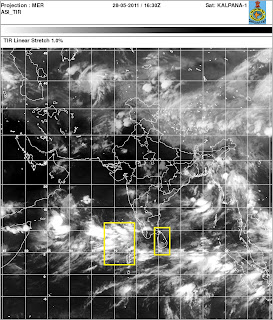 The Somali winds are strong enough now, and resultantly, the SST along the Somali
coast has dropped to 20-22c.

As explained earlier (in previous MWs), this, along with a high water temperature in the central Arabian Sea is needed to create huge Monsoon clouds in the central region. This is exactly the position today (28th). We see cloud masses in the central region, with the possibility of a system forming there by the 31st.
As seen in the sat image above, a distinctly seperate cloud mass off the Kerala coast is the developing SWM cloud. With the monsoon having arrived in parts of Sri Lanka, pre monsoon showers have
started in Kerala.
Conclusion:

SWM will cover the Sri Lanka entirely by 29th, and set up its advance into Kerala. Should hit and Kerala by 2nd/3rd of June. As of now, its further advance northwards will be maintained as per Vagaries' forecast.

will be covered totally by 29th, albeit as a weak current. SWM likely to advance into NE regions around 3rd June.

A system will form in the by the 31st of May. This should deepen a bit, maybe up to a depression strength, move north/north-west, and fizzle out before making landfall. Hence, may effect the SWM.

Mumbai: Sticking to the original forecast, Mumbai should get the first pre monsoon rains from the 2nd/3rd of June.

1June,Wednesday: Partly cloudy with thunderheads in the eastern sky by evening. Light drizzle in some pockets.