Mumbai Weather put up on Mumbai Page
SWM advances into the and : 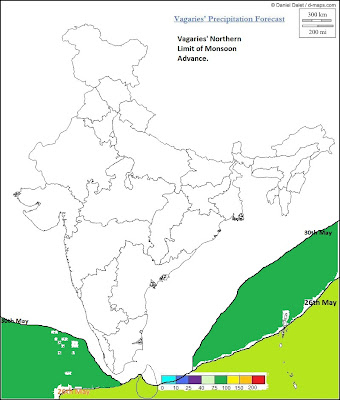 The Lakshdweep Islands received good rains on Monday, with Minicoy getting 40 mms and Amini Divi measuring 31 mms, accompanied by Westerly winds, in the 24 hrs ended 5.30 pm Monday.
The 200 hpa jet stream has arranged itself along the 12N line today, and huge cloud mass is seen in the Sea off the Kerala coast.
Surface winds have diverted to the South/SW direction in all areas in Southern Kerala.

Vagaries advances the SWM into the and adjoining sea.

As the winds along the North Kerala coast are still NW (as on Monday evening latest), they are expected to become SW and create perfect conditions for SWM to rush into entire Kerala within 12 /24 hrs.

The Eastern coast trough has shifted to the extreme North-East of the Bay, and an embedded UAC in the Northern Bay region has become persistant. With SW winds gaining speeds to 30 knts in the Bay region, including the NE region of North Andamans, and Andaman stations getting between 20-35 mms of rain, vagaries advances the SWM into the Northern bay and .

These are the personal assumptions of the author done as per IMD norms.

When the system will form in the Arabian sea?

@anonymous. Seems a system will form at around 15N by around 4th/5th June.