Rising along expected lines, but more heating needed for the SWM to arrive at Kerala at least by 3 June (as per Vagaries' estimate). 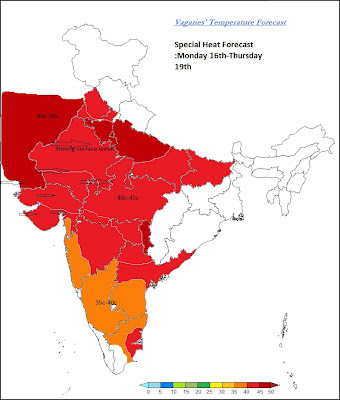 During the week, New Delhi could top 47c, places in west U.P. could reach 47c and Rajasthan could scale to 48c (Dholpur ? Ganganagar ??).

In Pakistan, Sindh will shoot up to 50c mid week, and Islamabd will rise to 41c. Karachi will hover around 37/38c during the week, with strong surface winds.

There is more precipitation in the central regions and west coast after Friday. Forecasts for Friday and later will be discussed on Tuesday.

For Nepal, we see thundershowers holding on to some regions in central and eastern parts this week. An increase in intensity is expected from Tuesday thru Friday. Kathmandu should see upto 20 mms per day on Tuesday/Wed/Thu, with the temperatures remaing in a very pleasant range, 28c - 17c.

This month's rain total has already crossed the month's average of 116 mms. It has totalled 120 mms till Sunday, 15th May.

Neeraj has informed us of the bountiful pre monsoon showers in Nepal this year (see inter-action page).