Yesterday's( Monday's) Forecast blog has been reproduced below with minor changes;

BB6 now over Upper Sindh as an UAC, embedded in the WD trough. So, as mentioned Monday, it has become stronger to an extent. Thick clouding is seen in the Southern quadrant in the impending (WD)trough.
We also see a WD at sea level, also at 1000 mb. over the Kashmir region. With this system (WD) suddenly trooping eastwards in the Northern regions of Pakistan, with a distinct trough southwards from it.
IMD Satellite image Super imposed by vagaries for easy reference. 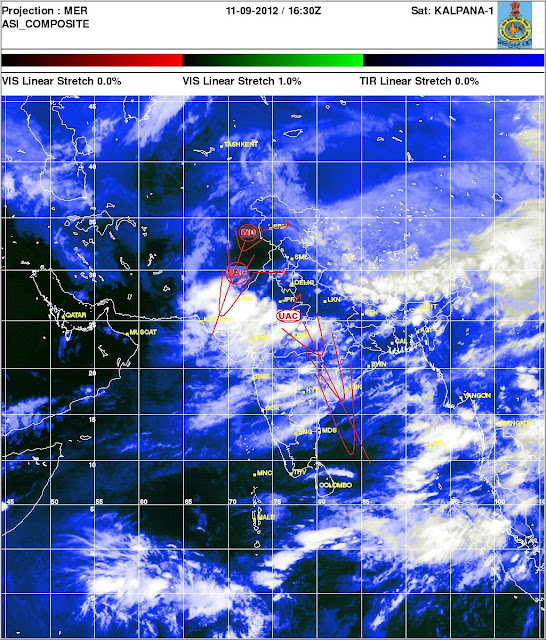 Yesterday's(Monday's) Blog stated: "But, by late Tuesday/Wednesday, the WD will pull the rain system along with it North-Eastwards. Due to the embedded low in the trough, there will be clouds drawing from the Arabian Sea towards the trough, and then pushing North-Eastwards into Kashmir, HP, Punjab, Haryana, North Rajasthan and Utteranchal by Wednesday".
This happened on Tuesday, and has resulted in several thunderstorms in Karachi and interior Sindh on Tuesday.

Wednesday 12th: Some remaing moisture from Gujarat vortex that had formed today morning in the Gulf of Cambay (now disappeared), will still precipitate some rains in North Gujarat. Northern AP (Hyderabad) may get some rains.
As the rains diminish from Sindh, Northern regions of Pakistan including Punjab gets moderate rain. Rains push into Northern states of Kashmir, HP, Punjab and Haryana.

Delhi NCR may get some rains from evening/night.
Vidarbha and North AP, Konkan rains get weaker.

Thus, we see increasing rains in Delhi NCR on Wednesday evening and Thursday.
For the South, we wait for the trough to move closer to the coast.

Mumbai:
Wednesday: Partly cloudy/Sunny warm intervals in the day. A few passing showers, in different parts. Day temp will be around 30c. Rain Amount: 10-15 mms.
Thursday: Warm day, showers in the evening will total up to 10 mms.

Surat:
Wednesday/Thursday: cloudy with a few showers adding up to around 10 mms.

I have noticed many times in past years that in whole World Indian Monsoon is very difficult for predicating !! And in that too West coast rains are more unpredictable !

Now take this year's example only..

No one predicated Pune will get 100mm rains on 31st July !

Then we all were blaming that IOD is negative, MJO is weak so not much rains for first 15days of August month but right from South Konkan tip to full Karnataka coast & North Kerala received very heavy rains from 1 Aug to 7th August period..

Yesterday Badlapur had heavy Rains with some thunder in Morning period till 11am. Then Just cloudy with sun out between and few spells in between.
Then from Today early morning 3am steady medium rains..

looks like rains r likely to continue till evening, in and around mumbai. steady heavy showers right from early morning. very pleasant weather .

Rajesh, you have to make allowances for 1 or 2 failures in prediction every season :) This one is a specific case !! Love it when Nature laughs at us mere mortals !!

Still waiting for your analysis of the morning event. Things looking up by 10 AM though it seems on and off rains will continue.

emkay:I had predicted heavy rains for Mumbai in the Sunday 9th Evening post on Current weather (highlighted). But, yesterday i went back on it, so cannot claim credit for it..
Hope , after this spell, Tuesday Mumbai reverts to my forecast put up yesterday.. lol

We are all awaiting the analysis of what happened

Very dark and overcast here in Karachi. Clouds seem to be coming in from the South west.

Rajeshbhai, thanks for the clarification on the heavy rains in Mumbai. What is the forecast now - does it hold for later part of the day and for tomorrow / day after or will it be different?

what is your next few days forecast for mumbai or is it same u posted yesterday.

Light rains have started now in KHI. Its very dark and overcast. Clouding can been seen on satellite near Khi (Sindh)

rains likely to continue in mumbai
for tommorow

An article on weather forecasting in that may be of interest. The title is, "The Weatherman is Not a Moron"

this article might be of interest to you: It provides a farmer's version of declining rains in and around bangalore and the ways he is coping against it .

@ Rajesh Sir. Thank you very much for explanation of what happen and posting mine snap on Vagaries blog.

I was thinking for west coast trough strengthening from Kutch Coast till North Konkan so I made yesterday's predication on previous blog and did not see WD interfering so not taken for assumpution .

And now satellite image too showing Clouding has formed south of Karachi again over NW Arabian Sea off Sindh/Kutch coastal area..(may be BB6 clouding may have not come down) but new clouding formation has taken place.. And might be remain strong over Sea till Wednesday..

Also said adjoining Kutch & Saurashtra & Gujarat will get scattered rains till Friday so it will happen.

And also said North Konkan will get occasional rains in intervals till Friday ranging from 20mm to 70mm.. So staying on it.

Wednesday/Thursday might be getting less rain for North Konkan so set an frame ranging from 20mm to 70mm and so mentioned might be in intervals too..

Last week 6 out of 7 days were above normal and this week already 2 out of 2!! Let's keep our fingers crossed. Yesterday (ending 8.30am today) CI received 99% above normal rainfall and 8 of the 10 subdivisions received excess rains.

All India deficit stands maintained at 8%.

IMD's Rain Data(Left side) & Dept of Agriculture, Maharashtra Rainfall data(right side) in mms

Seeing for first time variations in Rainfall data of IMD's and Dept of Agriculture, Maharashtra !

Bangalore call for desrtification was predicted 5years back. Sad part is Bangalore weather division,IISC,ISRO.. and others have not reacted to this. If next year this continues then IT itself will vanish...no water.


Myself feel NEM currents over past few years are becoming weak - negligible rains over interior KAR.

Rajisthan/Kutch/Gujarat has below normal 2012 summmer temperatures but have received excellent SWM rains.

no doubt bangalore is going towards desertification , i m excited to see our new indian desert .wow.

abhijit:there are always "way out" differences in the readings withe IMD and agri or dist rainfall guages...needs a lot of explanation.
But, with experiance, when you find a difference, take IMD as correct...

since sset have come on this blog i can only hear from him is abt bangalore is turning into a desert, so let it happen as soon as possible we want to see bangalore turn into a complete arid desert, with no greenery anywhere.

@ Rajesh Sir. I am observing Rainfall data of IMD & Agri both since June, both of them rain data would be same everyday.. only yesterday I noticed variation so raised an doubt!

And as per latest satellite of today morning still which I predicated that clouding will seen in Lower SE Sindh/Kutch border till Wednesday and current image also showing clouding off Sindh/Kutch border in NW Arabian Sea. So scattered Rain/Thundershowers will continue n Kutch, Suarashtra & Gujarat region till Friday.

seriously we must speak to the bangalore karnatak goverment , to change entire bangalore into a forest , may be then sset will be happy, if not turn into a desert.this will certainly make him happy. but plz do something.or throw him out bangalore.the best option.

Yesterday Badlapur had Medium Rain in Morning period till 11am. Then Just overcast with light drizzles to drops till evening and night had some open sky with stars were visible then today early morning some drizzles noted.

Rajesh or anyone else, can you pls tell me on which chart I can observe the WD?

The current spell produced unprecedented rains in Southern Punjab, Sindh and eastern parts of balochistan in last 5 days. The chief amounts of recorded rainfall in last 5 days are:

Absolutely blue sky here in ghaziabad.Lets wait for the evening and see what happens.

Tyrone: Thanks for the rainfall figures.
Interpreting a WD from a chart need reading the trough with practice and individual judgement trhu years of charting and explanations.
anyway, now you may see the trough and WD aloft on these 2 sites at least. Different charts and maps of various models vary on the same date and time...we have to interpret it thru own reading and knowledge of your regional weather...

Nice bright day in Mumbai after a long time. It's hot though, but the sun is welcome.

Heavy downpour here in KHI since last 15 mins but nothing on the infra red satellite.

Thank you Rajesh for the explanation

Sir still sunny and warm in Delhi. Will report in the evening.

Finally made it to Shirdi., cloudy (light grey) .. no rain. No rain on the way last night also from Thane also.

Rajesh sir/Abhijit... are we looking at a few sunny days in Mumbai and extended suburbs?

Tyrone, it's good to see the monsoon making up a bit in these last few days in your part of the world... hope the WD and embedded UAC makes it possible for a few more such rainy days.

rains will be back in mumbai tommorow, lets enjoy the suny spell for today

vivek:Thanks for the feedback...Gurgaon, Faridabad seem to have some showers, but more rain seen in Dayalpur areas...

GSB: Hope you get proper "Darshan" and pray for all of us...Have put up wed/thurs forecast last night..

Thanks GSB. Yes I agree with you. Rain is never enough :)

Raining since past one hour now in Karachi.

Total rain amount should be around 50mms