Huge Thunderstorm South Of Mumbai..@5.30pm Pic on Inter active page of this blog, and many more on Vagaries fb 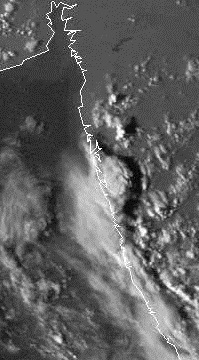 A vicious storm seems to be on around the 100 km radius mark NE from Mumbai as shown by the latest Doppler. Cloud height seems to be upwards of 15 KM!! The rain rate as indicated in the doppler is around 100mms/hr in some patches

@ NT Badlapur's NE is dark with thundering from last 10mins and slight winds also from NE side.. Hoping to arrive that patch in Badlapur too ! Still Badlapur's west side is totally clear..

@Abhijit, the storm rain intensity has now reduced as seen from the Doppler

@ NT. Yes it's just drizzling in Badlapur. And see Vagaries FB for mine snap that how moon is visible in between black clouds in East side.. That indicating storm fading away here !!

As I am looking at that storm that Junaid is talking about, it seems to be moving in a Southernly direction. It was NE of Mumbai 1 hr. back, it is right over Matheran now and more in line with South Mumbai. The cloud tops have now touched 18KMs and rain intentsity is back to 100mms/hr.

@ Junaid. Panvel might get storm.. Lightening going on South of Badlapur where actual Matheran is located.. Badlapur just having drops falling now. Taking Lightening snap which is going on Matheran range.

@ NT.. Yes.. All gone to south now. Badlapur's drizzles to stopped now.Lots of lightening activity in South of Badlapur where actual Matheran is located.. Just now taken one lightening snap which was felling on Matheran range. Will post on Vagaries FB in few minutes.

Matheran getting heavy rains with lots of lightening activity can see from Badlapur also. Rains are just 10kms away from Badlapur in south directions

5 mints back big droplets of rain started at panvel in a drizzly manner,,same like badlapur!!

Ofcourse the spillover will then get added to the Oct to Dec rainfall figures in any.

Rajesh sir will mail you final monsoon analysis at around 7pm so that you can then post it after perusing for any changes..

The huge storm in the pic has dissipated to form cirrus clouds with low cirro stratus in the region 50-100kms south of Mumbai.
another storm, as readers moitored moved from the NE of Mumbai towards SW of Mumbai, cutting across Matheran and nearby regions.
Temporarily, South Mumbai had lightning and light drizzles at around 6.45 pm

GSB; sure, waiting for the final results. Below expectations . Monsoon has behaved on its own whims every month this season !

Rajeshji - Bangalore did not receive any heavy rains - as forcasted. just few mm - no use for extreme drought.

Infact recent UAC,low over western Raj,Guj,Kutch for 10days brought rains over 500mm - a month rain in 10days - tiding all deficiencies.

rajesh sir predicted heavy rains for bangalore this weekend .not a drop here and it doesnt look like it will rain .forecast failed miserably

@ Rajesh Sir. As we discussed last night that yesterday too SW Saurashtra had Thundery development near Porbandar -Junagadh Belt.

So some Rain data of today ending 8.30am for Saurashtra region.

abhijit: Yes, i saw the figures too. They are put up by IMD. But, i'll wait for my recheck..as yesterday, Anjar received 43 mms, that was correct, but it seems the actual rainfall at Bhuj was 24 mms.!!

The main thunderstorm activity starts in mumbai by tommorow evening or by monday. today was just a glimpse of wht is abt to take place from next week.

Okk. Rajesh Sir.. Today was excited to see Thunder developing but also disappointed as it didn't pour here ! And instead it quickly got disappeared.. But I think Murbad, Barvi dam, Badlapur in NE of Badlapur & Matheran, Karjat in S/SE would have got better spell as per Radar report & also by visual observation from mine place. So lets see an rain amount of that places tomorrow..

@anonymous, didn't it rain in Bangalore on Friday night? there was heavy rain for around half hour when I was driving between Whitefield and koramangala

As said earlier thunderstorms that we are waiting for , are going to take place now so the countdown begins fro today till thursday.

the imd has predicted fairly widespread rainfall activity for maharashta after 3 days!!

Nobody is predicting rain for western himalayan region still it is raining there at isolated places ranging from light to moderate to rather heavy.Yesterday Dehradun recorded 7.4mm of rain.

rajesh sir was right .it was a wet start to sunday for bangalore.moderate rain for 30 min .hope it turns into heavy rains as the day progresses.as of now conditions look perfect for heavy rains

@kea weather ..is it .it was not heavy in my area .bangalorecity and airport too did not recive significant rains

A sudden change in wind direction from tommorow thats is SSW direction is going to bring rains in mumbai temporarily.

wow that means sset will be very happy now , as bangalore is experiencing very good rains.