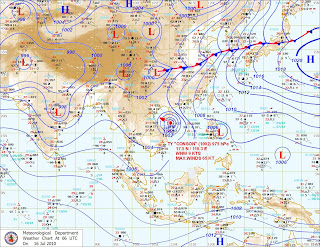 Yes, I have read the IMD bulletin of the monsoon axis moving northwards,to the Himalayan foothills,and no systems forming in the bay.
But, prefering to stick to my estimate, as published in my blog,early next we
ek the axis will shift southwards, and have embedded systems within, from Sunday.Infact,I would visualise it a bit south today itself, with a low of 998 mb pulling it.See Thai map and make your own judgement,as things such as monsoon axis is always an imaginary thru a trough of lows with wind flow east above and west below.
FNMOC,of the US Navy also estimates,easterlies beginning to sweep the northern plains around this time, confirming the axis shifting south.
The National Centre for Medium Range Weather Forecasting quoted model predictions to suggest that the monsoon axis may lie along near-normal position during the next three days.
From this weekend, I maintain of good rains in Gujarat and Rajasthan (refer my blog ).Again,I am encouraged by the he FNMOC forecasts which shows heavy rain over west Madhya Pradesh-east Rajasthan border and then moving further into N.Gujarat/Rajasthan during this period, when,all parts of the State are expected to receive rains during the week ending July 22.
The UAC,(in map) now over M.P. may move westwards, and with embedding in the 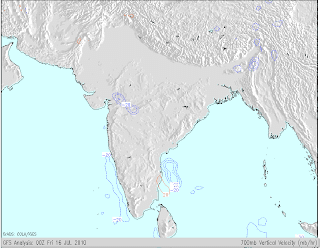 monsoon axis, may coincide with the rains in Gujarat/ South Rajasthan, this weekend.
Meanwhile,Tropical Storm Conson is expected to turn north-west hit southwest China coast,around Saturday.
Now, another factor !
After striking land, the wind flows from the Arabian Sea, now cutting across the peninsula, or rather by-passing the Indian lanmass, would get a relieving chance to readjust and give the go-ahead for monsoon flows to revive over the west coast from Tuesday (or approx.3 days after the typhoon hits land).
The flows are now being diverted to feed the Pacific storm.
All this, will coincide for the west coast around Tuesday/Wednessday, when a low is expected to pop up in the bay. The winds will gear up with double momentum, if the sequence really works out together.
Further into the following week, after 25th. we may see the rains dragging further west of India into coastal sindh region as a weak current.
Mumbai will continue to get the showers with bright spells its getting now till Monday. From Tuesday night, expect an increase in rains,upto 75 mms on Wednesday.
By Rajesh at July 16, 2010

Rajesh, Nice to hear that some monsoon rains will be reaching Sind. Also saw on the COLA site. I hope we get some meaningful monsoon rains in sind during July/August. So far nothing meaningful yet :(
Tyrone

But i think you'll have to wait another 6/7 days for some meaningful rains.