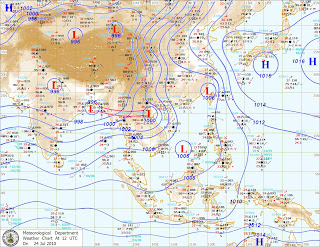 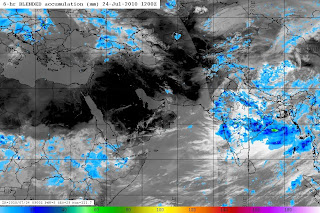 aturday.
Winds from the Arabian Sea rushing into the Bay Low, pushed moisture and rain clouds into the Maharashtra coast. As mentioned, the winds picked up really fast after the forming of the low. And rains commenced in the city early

Saturday morning.
Now, the system should move west, and will be over East M.P/Vidharbha/Chattisgarh by Sunday. As the peak intensity is done with, the rains along the coast may sober down to some extent on Sunday.
In the 9 hrs, from 08.30 am till 5.30 pm, Saturday, Mumbai Colaba measured 135 mms and S,Cruz 97 mms of rain.
On sunday night, city should get another spell of heavy rains, and the night rains should measure about 35-40 mms, adding upto aroound 170 mms in 24 hrs ending Sunday morning. Sunday rains will be heavy at times, but not as consistent as Saturday,and more spaced out. With somewhat frequent showers, Sunday should guage up about 60-75 mms.
As the system moves towards west M.P, a slight increase in rains on Monday would be expected, to about 75 mms.
Tuesday, I would see some decreasing of the Mumbai rains.
Interior Maharshtra, and ghats rains will decrease after Tuesday
By Tuesday, system would have crossed Gujarat, with a tendency to move back into the Arabian Sea.It would not be out of place to expect some rains on Tuesday, (when the system will re-emerge),along the Karachi coast.
COLA estimates the new low in the Arabian Sea to move into Oman.
The Northern belt, already reeling under floods, will get a respite from rains next week. Central India will get the brunt of heavy rains this weekend.And Gujarat form Sunday thru Tuesday should get good rains.
Its on now! Another low could be expected to form in the bay around the 27th/28th. a off shoot pulse from the latest typhoon in the Pacific.
By Rajesh at July 24, 2010

Reply to query put up for lakes level:
Mumbai lakes rainfall and levels are not available on any site. At least i am not aware of any wab site giving this information.
Has to be collected and published. do not want to give it daily, as it would get monotonous reading it everyday.

is this supposed low pressure on 27/28 forming again in northwest of bob or west central bob..

Another pulse ? Is it a consensus estimate among major weather forecasters ? IMD says the trough will run close to foothills by this weekend , can you please elaborate

My assumption is low should form initially in the central bay.well,if the low forms, trough shifting north is difficult.