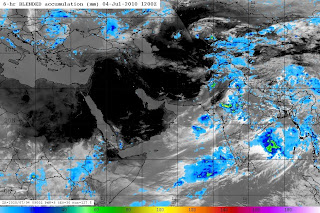 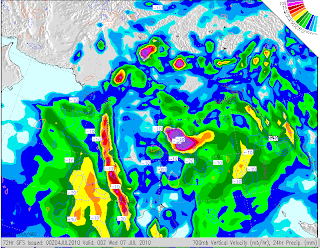 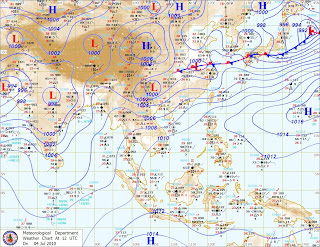 The UAC has weakened and moved away west as a very weak circulation in the Arabian sea off the Okha coast.
An area of low presuure,998 mb, has descended from the upper atmosphere, and formed at sea level over M.P.(Thai Map)
This event has shifted the monsoon trough southwards, and on Sunday,passes through Phalodi, Ajmer, centre of the mentioned low, Nagpur, Jagdalpur, Visakhapatnam and
thence southeastwards to southeast Bay of Bengal. It extends upto mid tropospheric levels and passes through Dahanu, Ramagundam, Kakinada and thence
southeastwards to southeast Bay of Bengal. The off-shore trough at sea level from Maharashtra coast to Kerala coast persists.
With this, hopes of reasonable rainfall resuming in the central regoins of the country have brightened.
A fresh low pressure is forming in the bay, and is expected to become stronger and move towards the Orissa coast in the next couple of days. The system could be expected to cross the Orissa coast around the 6th, and move inland. Hence, heavy rains could be estimated for the A.P./Orissa coast from the 6th,Tuesday, and increase in the next 2 days. As the system moves thru the central regions of the country, monsoon could get activated, and rainfall ( to the tune of 40-60 mms/day) could be forecasted for the entire M.P.and Maharashtra coastal regions from Tuesday thru Friday. (I go by the COLA forecast of system crossing on 6th).
But, the interiors of Maharashtra and Karnataka may have to continue with the minimum of rains, without substantial increase next week.
Actual rainfall distribution during Sunday is shown in the rain map above.Good rains along the western peripheri of the low.Total rainfall during the past 24 hours at 193 available stations in the plains, out of 291 stations, is 242 cms. Normal for the above 193 stations is 58 cms.
Realised rainfall & Chief amounts (in cms) during past 24 hrs enede Sunday Morning:
Cherrapunji 13.2, Haflong 7.5,
Wardha 9.9, Guna 7.4, Sheopur 4.6, Khajurao 4.3,
Mumbai (Colaba) 14.9, Bagsra 14.2, Alibag 10.7, Jamnagar IAF 10.4, Baroda City 10.3, Rajkot 9.5, Thasra 8.4,
Cannur 6.7, Balasionor & Halol 6.6 each, Panambur 6.0,
Now, the North-West and the Northern region are yet to recieve the Monsoon. With the Monsoon having advanced more into the North today, the day temperatures have fallen to some extent.
Highest in Asia today: Dal Bandin (Pakistan) and Basra (Iraq) : 47c
Highest in India:Jaisalmer: 43c.
Mumbai: Surging ahead ! Mumbai Colaba is moving ahead with having recieved 52% of its monsoon quota by the 4th. of July ! With a fresh addition of 149 mms on Sunday, the total at Colaba has now gone upto 1109 mms. Santa Cruz Airport has totalled 891 mms as on Sunday.But, the much needed regions of the lakes still need a lot more, as the rain in the lakes average around 500 mss in comparison. (The 1109 mms in Colaba has "gone down the drain").The highest yesterday in Mumbai was in the Worli area, with 184 mms. (I have my doubts about the correctness of the 39 cms reported from Dharavi).
On Monday, Mumbai will recieve showers, which should not be too prolonged.Showers will be scattered in parts of the city at different times of the day. Acuumalated rains will total 20-25 mms /day.
On Tuesday and Wednesday, a moderate increase in the rain intensity, to about 35 mms in the day, with thunder.
By Rajesh at July 04, 2010

Why would there be an increase in rainfall in Mumbai on Tues / Wed of this week? And why would it be thundershowers? What system will cause it - there does not seem to be any apparent systems around at this point

I think there will be an increase in rain as the low in the bay will be crossing the coast just opposite Mumbai. See blog. And thunder is my assumption as the system bears very high clouds, i.e. thunderclouds. see , even now, monday night, cloud top ain around the system in the bay and inland are at -65c.

5 - 6 cms of rain in Mumbai from y'day evening till today morning as recorded by IMD. Some showers in Andheri side were torrential - though not lasting more than 10 mins. The low in the bay that you mention has formed as per the latest IMD bulletin