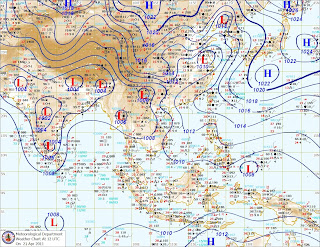 A low has formed in the interior Mah. region as on Thursday (21st.) evening. The Thai Met map shows this. This in fact is the same UAC which had vortexed in the region yesterday. Descended now to MSL.
Click here for enlargement. 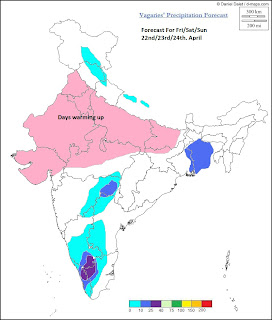 Vagaries' expected place to touch 45c, Idar (Gujarat), was 42.0c on Thursday.
Resultantly, as per Vagaries estmate, Convective activity is seen in the Vidharbha region, and adjoining South M.P. Repeat, fairly heavy thundershower in Nagpur. This area will get thundershowers on Friday and Saturday, tapering off by Sunday.
Also seen in the Map above, another Vortex in the Upper Air has formed in North Kerala, Nilgiri and South interior Karnataka.
Friday/Saturday:Expect very heavy rains in Palghat regions of Northern Kerala and adjoining T.N.( including Nilgiri) and South interior Karnataka (Hassan).
By Rajesh at April 22, 2011

I am from Pak weather Portal...Yesterday Temperatures touched 40C in Karachi..hightest for this year up till now..

Thanks, and it was 41c on Friday in Karachi. Read your Portal..very interesting.