A3 chugs into the Sub_Continent. Definetly no links with railway timings, W.D.s arriving bang on time.
On Friday,15th, we see A3 clouding a major portion of North and Central Pakistan, NW India and extreme North India. Rain/snow has been reported from all these regions.
Light rains measured 5-7 mms in North India and Pakistan.
Earlier, A2 had formed an induced low, in the plains of N.India, and from this low, a trough, or call it a line of wind discontinuity, ran all the way southwards into Karnataka. This trough, normally travels, or shifts eastwards , along with the movement of the parent W.D. But, in the current case, its South end is steady.
Stretching thru the central regions, this line had brought extreme thundershowers in M.P, interior Mah, Karnataka and in parts of Kerala too. In fact, it was rather heavy on Thursday in interior Karnataka, with Renebunnur (Haveri Distct) receiving 101 mms of rain.
Vagaries' forecast of thunderstorms along the trough and in Vidharbha on thu/fri/sat held good. Vidharbha too got its share.
Akshay* narrates from Nagpur on Friday evening-Quote: " a very severe thunderstorm hits nagpur with frequency of cloud to cloud lightning over 100/min.
Scanty rains but bright lightning enough to make night as morning."
It seems, A3 too, is tending to follow this trough line routine, and could result in thundershowers in central and southern interiors again, next 3 days.
The meeting of east-west winds along this line, is voilent, and results in massive build up of CB clouds, reaching great hieights, created by near perfect CAPE and
L I conditions. Ajekar, in interior Karnataka, had a hailstorm on Thursday.
The negativity of this? This will continue to keep the day temperatures down, below the normal heating range required for this time.
More of this in MW-2 , which will be put up on Saturday night.

Meanwhile, highest in India on Friday was 41.1c at Akola, and highest in Sub-Continent was 42c at Chorr (Pakistan).
Outlook for next 4 days, Sat/Sun/Mon/Tue:
Enlarge Map here. 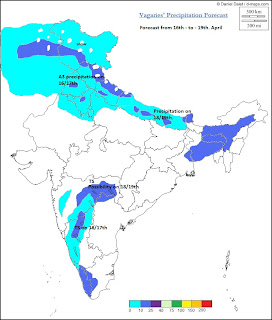 Saturday/Sunday, 16/17th:
-A3 rains in Northern Indian states of Kashmir and H.P, with snow in higher resorts. Due to depth of system, rains/hails in Punjab,Haryana,Delhi, North Rajasthan and Western U.P. Days in New Delhi will remain around 37c, with nights dipping a bit to 22c. Cities in Punjab will be in the 34-18c day/night range.
Due to the residual moisture, interior Karnataka will continue with its sporadic thundershowers. Maybe spreading a bit north into south Mah.
-Precipitation moves into W.Nepal.
-Northern and central Pakistan will get the precipitation benefit of A3, these 2 days. Keeping Islamabad cool within 25c in the cloudy and rainy on Sat/Sun. The hottest regions of Sindh will be cloudy, and the days may not exceed 40c. Karachi, will be cloudy with the thermometer reading 36c in the days.
Monday/Tuesday, 18/19th:
-Some residual rains/snow over the hilly tracts of N.India will be prevelent.
If precipitation continues in Kashmir, then I expect snow in Srinagar on Monday.
South Mah. to get some left over pockets of thundershowers. A embedded vortex could form over Marathwada on Tuesday, and may result in thundershowers, with some drifting into west Vidharbha. This vortex point, we shall review again on Sunday.
-System moves eastwards, and slides into all of Nepal. By Monday, fairly good precipitation all over Nepal. Kathmandu to receive rains, around 10 mms Monday thru Tuesday. Days will be just within 30c. A3 fading away from Tuesday. Almost in tune with the forecast issued on 13th April for Nepal.
-With the system having moved away from Pakistan, a slight cooling at night could be expected in the North, with Islamabad reading around 13c. Karachi will maintain its clear days to around 35/36c.
Monsoon Watch-2 will be put up on Saturday night by 10 pm.
* Akshay is a regular contributor to Vagaries and a well wisher. He is a keen meteorologist which can be seen from his blog METD.
By Rajesh at April 15, 2011