Sub Tropical Ridge Western End shows a slight shifting towards the Indian Coast ( i.e.Shifting West). This would enable Lehar to maintain a NW track for the next 24/36 hrs.

The Very Severe Cyclone has maintained its strength at T4.0 since 07 PM IST till 17.30 pm IST..and winds estimated at 65 knts. Pressure estimate 985 mbar.

Currently the core centre, located at 12.9N and 89E, is moving along the Southern Periphery of the Ridge.
A Sat Image showing the central core and upper winds has been shown here to gauge the Ridge as well as the fluctuating central core.

Lehar will now encounter drier air as it tracks towards the NW. The drier air is encircling the cyclone from the North-West and SW.

Next General Update on vagaries late tonite at 11.30 pm IST

Dry air, or air with low precipitable water content is surrounding Lehar from the West. Its wrapping around from the South tendency seems to be forming....may result in slackening  of strengthening, or even falling a notch lower. Shall observe the next 6 hrs...next brief report here @ 6 pm IST
www.vagaries.in

Severe Cyclone Lehar...Wind speeds 65 knts, core pressure 986 mb and Cat 1. at 12.6N and 90.6E
The cloud mass noticed earlier has now merged with the central cloud mass, and an enlarged clouding is seen in the Eastern semi circle. 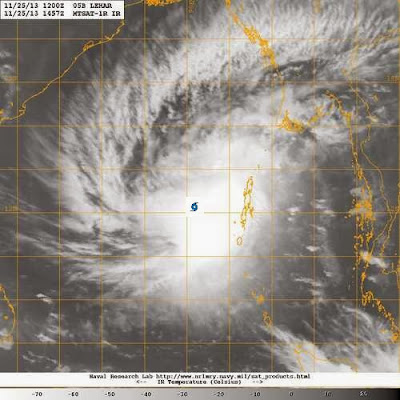 The cyclone will now track WNW, where the shear tendencies are showing decreasing trends. Alongwith the warm waters, we will see the cyclone strengthen to Cat 2. Later, on its track, the system encounters dry air. Hence, the strengthening faces resistance.


The jet stream parameter and high pressure ridge will force the system to turn NW or even NNW later and cross North AP coast by the 28th. 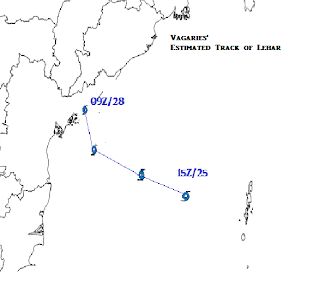 what a wonder north east monsoon Mumbai and Pune is getting heavy rains and Chennai is dry .

correct. This pattern of NEM was observed since last 5 years. TN goes dry but send pulses elsewhere orissa, excess rain socked MAHA. Next year may be no different - worse than this year.

I think there there is urgent need to study the NEM changing pattern, chennai got decent precipitation from SWM where as NEM season is mostly dry. Strange !!

any chance of rain in sambalpur

any chances of the cyclone drifting close to Chennai and nellore ?

Nilesh Ladhad: seems so, as track is towards N Andhra...shall put up tonite

Torrential rain with loud thundering & lightning lashed Badlapur for 45mins period. Also their was gale force winds from NE which was giving feeling like cyclone !! Badlapur recorded 45 mms rain between 8pm to 8.45pm period today. Current temp is 22.4c with humidity of 90% ..

Dombivli had severe Lightning with squally winds But had only 10 min drizzle!!!!

Dombivli had severe Lightning with squally winds But had only 10 min drizzle!!!!

We will have only cloudy weather , no rain's . what prediction's hahaaaa

Just phoned to electricity office here.
It will take more 2hrs for power supply
to restore as at several places tree
branches has fallen on light poles so
power supplying copper wires from
poles have came down due to almost
mini cyclone here !!

No lightning or winds seen in western suburbs of Mumbai

No lightning or winds seen in western suburbs of Mumbai

Moderately heavy and widespread rains here in Margao Goa since 9:30 pm. Humidity in the region 90+ throughout the day.

baboo chachoo, or whatever your name is..whats so funny every time ?
did u not see the prediction of rain in eastern townships ?
If u find it funny and a place to mock, please refrain from reading this blog. It will releive you of stress and strain.

Appologies for mocking on this blog, u will not see my comment any more.