Coming back to the trough off the West Coast, it has an embedded UAC at 700 hpa in it,which on Monday, 11th, was off the Mah coast.
From weather patterns, it seems the UAC, at 700 hpa, will just shift a bit towards the coast on Tuesday, before returning to the off shore position away from the west coast,somewhere off Goa coast by Wednesday, 13th.

Rainfall wise, i do not really see any meaningfull increase due to this shift on Tuesday. A very nominal rainfall increase would be measured in some places of the interiors East of Mumbai along the Ghats on Tuesday.
Wednesday would again mean a decrease in rain intensity all along the Konkan belt.
As the trough would remain "mediocre" i would not vouch for any substantial increase in rains along Konkan till Friday, 15th.

Interior Mah: South Madhya Mah. would get 2-4 cms of rain on Tuesday, while Marathwada would recieve thundershowers, heavy in some places on Wednesday and Thursday due to heat convection.
Would not recommend advance of Monsoon into the regions at this stage.

Tuesday: 32-27c. Windy and Partly Cloudy to cloudy by afternoon. 50% chances of light to medium showers in some parts of the city. Rain amount expected 7-10 mms.

Central Interior regions of Saurashtra would get some rainfall, light to medium, in a few spread out pockets till wednesday.
Surat possibly could get a shower on Tuesday, with decrease in rainfall from Wednesday.
Bharuch, cloudy with a few light showers on Tuesday or Wednesday.

Local heat would create a vortex in interior AP on Wednesday. If the heat is extensive, I would expect the vortex to be pulled in from the trough along the East Coast, to bring about heavy rains in Hyderabad on Wed/Thursday.

Light rainfall in spread out pockets in S.I.Karnataka next few days. Very heavy rainfall due to the off trough strength expected along Coastal Karnataka from Wednesday.

Today is the 11th of June, and normally it is expected that the SWM would have covered 50% of India. The regions ander cover should include the States of Mah, AP and Orissa, and the complete NE and Eastern WB including Kolkata and all should be under the bountiful rains of the Monsoon by now.
But in reality, a very small area is covered by the SWM this year, The Map on the Current Page shows the actual coverage as on date, and roughly would work out to, say, 25-30 % ??

Poll for Wettest place in this year SWM
-------------
After last year's epic rainfall race for being the wettest places during South West Monsoon. I have compiled a poll for viewers to vote for the SWM season 2012. The final poll results are published.

Further the much expected SWM figures will be posted for the period ending June 15 by next week end. Watch out the figures in Tamil Nadu Weatherman Blog, Indian Weatherman Blog, Kea Weather Blog, Vagaries of the Weather Blog (Rajesh Sir) and Ring Road Weather Station Blog (Ashok Patel Sir). I am monitoring the data of around 150 HRF stations so its exciting times ahead.

Thanks Pradeep, shall talk to you personally.

Bhavik/Ron: its just a off shore trough with an embedded UAC (shallow)..Vagaries would have informed if a low forms..maybe days in advance -:)):))

It is the Offshore trough, but I can see it extending and moving near the coast. Can it bring good rains in Mumbai? . My guess if it breaches the Mumbai coast then we can safely declare the arrival of SW monsoon ...

Unless IMD declares monsoon over mumbai today, we might have to wait till sunday for declaration when rain is expected to get heavy.

Hello rajesh sir,was wondering..you said the monsoon would most likely come to mumbai by Wednesday, but you haven't forecasted much rain on wednesday..so is the monsoon arriving after the 16th now??Or when the dry MJO phase gets over..so does that mean you will revise the amount of rain for mumbai for the month of june??

Hello Sir,this is Srikanth from hyderabad...Are there any chances of rains in Hyderabad this year at all.....?

Hello Rajesh, Thanks for your blogs. I have just recently started following it. It is really good to see the detailed analysis that you bring out.

Today the weather was really very hot and uncomfortable in Surat. Max temp was 36C and humidity 58%(dewpoint 26C).No rain in Surat from last 4 days. Eagerly waiting for rain.When the surat will receive the rain??

bhavik/ron: i think i have responded to your comments in the blog.
Amit:would like to know where you are from ? welcome to the vagaries' family.
svt: in that case let IMD declare the SWM and we can get good rains -:))) 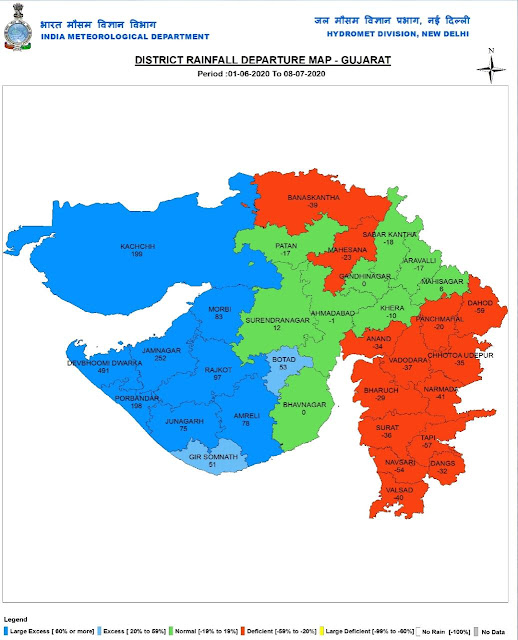