Mumbai forecast For Thurs/Fri/Sat with Thursday Morning Actual put up on Mumbai Page...Note the rise in pressure on Vagaries' Reading Page !

The SW Monsoon has covered the country today, 10th July.
BB1 is moving West, and is positioned over the West MP/Gujarat/adjoining Rajasthan region. Though not very deep, it is 994 mb, but the associated upper air circulation is extending upto 500 hpa. 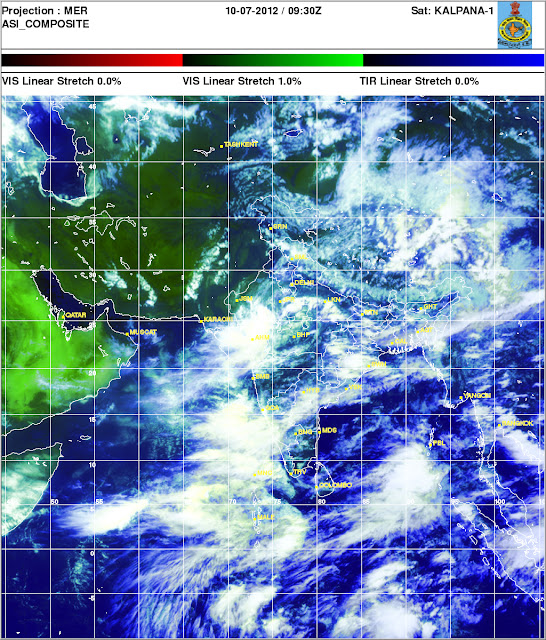 The clouding is concentrated in the Western Quadrant due to the favourable Lifted Condensation levels in the region over East Gujarat. 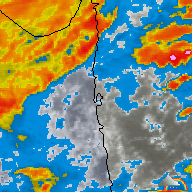 But, the North Konkan region was convienently by passed on Tuesday.

On analysis as to why this happened, We can see from this image (above) of Tuesday morning, that the Maximum Level of Free Condensation has risen to over 5000, considered un favourable for immiediete cloud formation. But this can always change rapidly with good moisture incursions.

On Monday/Tuesday the precipitation in the areas forecasted by Vagaries(barring Konkan)has been on expected lines. Very heavy rainfall of 216 mms was recorded at Garhi in East Rajasthan. Banswara recorded 175 mms. Ujjain, where Vagaries had predicted very heavy rains, saw 102 mms, and Narsingpur 95 mms. Nearby Rewa saw 42 mms.

Would expect BB1 to move North/West and fizzle out over the Kutch/Rajasthan region.
Very heavy rains expected in Kutch on Wednesday and Thursday. Regions North of Ahemdabad will also get heavy rains next 36 hrs.

Alongwith the system the Monsoon also moves westwards into Pakistan's Sindh Coast. The Monsoon should be on KHI by Thursday, and as mentioned yesterday, Karachi should get showers by Wednesday.

The UAC mentioned earlier has descended as a low around the MP/Gujarat/Rajasthan Border. Associated clouding is seen in the satellite image, mostly in the SW Quadrant in Gujarat. (BB1). (Ananth, I think you are bringing in the luck)

Clouds and precipitation are seen moving towards the low along the South Gujarat coast. Most of the "rush" of clouding is above the Maharashtra border, just about "avoiding the Konkan Coastline" as of Tuesday afternoon.

Rain can be seen in North Gujarat, and adjoining MP...but not along Konkan as yet...

Lets see and observe the low throughout the day today..and discuss tonite..those on Fb please come on line for discussion in the "Vagaries of the Weather" group....@ 10 pm

Thank you Rajesh, Delighted to see the BB1,i hope its harbinger of more positive news

@ ananth. Very true.. More such low needed from Bay and thier traveling path must be West of WWN side ! By the way one low should create over AP coast and should travel over Madhya Maharashtra region as Pune, Sangli, Satara are in worst conditions of drought ! Pune have got just 51.5 mm rain from 1st June to 10 July period due to absence of Low from BB. And North Konkan has also not seen yet their typical non stop 48 to 36hrs heavy rain until yet ! By this time one or two heavy rains episode are experienced by North Konkan in which Mumbai, Thane, Kalyan, Ulhasnagar, Vasai, Panvel, Karjat region gets rains around 200 to 300 mm in 24 hrs ! Which helps dams of Mumbai ,Thane, Pune,Nashik to get fill more than 60% by this time of July. But all is missing this year until yet and dams levels are alarming due to no episode of 250mm rains in 24hrs period in North Konkan Belt ! and today no rains just one spell of rain over Badlapur Region ! Now just overcast ! Atleast yesterday full day saw an contionous rains but today after achieving low mark rains are bypassing North Konkan !

Can you please explain what is a UAC and BB1?

As I mentioned, I am trying to learn more about the monsoon.

It seems west coast off shore trough is getting organized or stronger! Today 8.30 am rainfall data shows decent figures of Rain right from Trivandrum,Kerala to Coastal Karnataka and now extending till Goa. Hoping for getting more stronger and Heavy Rain reaches till North Konkan now !

any chance this low will embed with the off shore trough...any lows about to form in the coming days...

Hour long of heavy downpour here at greater noida....weather is too good...it has rained daily here since 6th july (except 8th), hope it continues this way :)

What do weather experts make out of this?

Today sky was covered with heavy clouds. During the evening time Surat got some heavy showers which lasted for 30 min. I think that total rainfall amount should be around 30-35mm.

What is the prediction for rains in Delhi, Punjab and Haryana in the coming days?

@ Rajesh sir.Thank you very much for providing Barvi dam rains till today & current filling position of Dam. For suburbs cities like Thane, Kalyan-Dombivili, Ulhasnagar, Ambernath & Badlapur and even some parts of Navi Mumbai like Airoli-Koparkhairne are fully dependent on Barvi dam water supply for whole year. And in Thane District only Thane city & Barvi dam,Badlapur region have managed to cross 700mm mark of rain for current monsoon season till today.

Raj / Guj receiving lows from both AS and BB. (this pehenomenon has become more prominent during last 5 years). Jaisalmar 2010 monsoon has recorded 800mm in 2 days showing extreme heavy falls are not only for konkan or NE areas. Kutch receives more/excess rain than interiors of south peninsular india.

ron:the current low ,BB1 , will merge with the monsoon trough, which will shift south. That may keep the off shore trough "alive"
sset: vagaries had predicted good rainfall for Mumbai region for Tuesday..but city itself got notheing, and navi Mumbai got good rains as you mention..
anonymous: are you from Delhi ? Please mention that as it helps to forecast and get feedbacks.

Sir pl list out the driest places of this season which are rain deficit, i knw i wil get immediet response of sset stating it as bangalore at 14mm but drought is very severe in the regions east of nh4(pune blore highway) pune is stil egarly waitng fr rains as banglore,
sset do visit pune to see the harshness of weather

Any chance of heavy rains in Delhi/Haryana this week?

many places in trombay,deonar waterlogged...

vivek: Delhi /Haryana can get light rains upto 10 mms on Thursday. Friday there can be an increase in intensity, with heavier showers in Delhi region. And Saturday too will get rain ,medium in many parts of delhi and Haryana.
If you want more in detail, please let me know, and i can put up in evening....

looks like the monsoon has covered entire india now

Yes I am eager to read your forecast for Delhi/Haryana. We have had one good spell of rain on Friday (6th July). And scattered thundershowers thereafter.

It rained a little bit this morning. But its bright and sunny right now.

Pavanji myself am a great nature lover and was a resident of BARC Anushaktinager and now Navi Mumbai. I have visited Pune multiple times of course Mumbai-Pune hills always charmed me. Last 10years I am in Bangalore for my work. Coming from green areas of Mumbai and seeing barreness, destruction of trees, useless politicians of Karanataka has always disturbed me. Infact with my own eyes I have seen how climate,rain,soil of Bangalore,mysore has changed with trend towards desertification. 20years back Bangalore/Mysore was different- some premonsoon, little normal monsoon, little NEM so atleast 800mm average city used to receive- but during past 5years - NEM dissappeared, normal monsoon barely touched 100-200mm, pre-monsoon only 80mm. But this year that is also not present.But last 5years Pune got good rains exceeding 1000mm yearly rain.

But if you notice reverse is happening over Guj/Raj erstwhile dry areas -now wet areas. Maybe scientific correlation maybe incorrect but this is from eye observation.

Alexander Rajan (weatherman from Bangalore) any comments on Bangalore? Anathji could you bless interior peninsular India?

@SSET, i wish i had the powers to conjure a deep depression powering rains into peninsula, but all i can do is hope earnestly, and probably motivate people to use water wisely. Droughts is a very much part of Indian life.

PS: I have a hunch that a low might pop up near andhra coast around 18th. (more hope than anything else).

Pradeep has promptly enriched us with one day highs. If we notice Maharashtra, Cherrapunji are major toppers - and one outlier we are debating Rajisthan (dry areas) has entered topper list - and none from peninsular India!!!!!

Some of the worst dry areas of peninsular from IMD report - rain as of 01-june-2012. Wondering if same repeats next year?? because NEM has been never strong for past 5years

Friday, Delhi gets a few showers heavy in some parts, cloudy day. From Friday night, Delhi and Haryana get good rains till Mid day Saturday.

UAC is Upper Air Circulation. That is "low" at a higher altitude.
BB! is the number given to a system from the Bay. 1 is the first of the season.

Thanks Pradeep.
Ananth., i too hope so, a low for the Bay soon.

I will keep you posted.

Rajesh- Rained vigoursly today early mmorning at Navi Mumbai - Belapur between 12am and 3am. Rain was intense,stromy,thundery - looks like dump of 100mm - 300mm in 2 hours.

Thanks Rajesh ji for all the efforts you put in for the blog.

Is it Possible to put a page specific for Pune, like it is done for Mumbai and Aurangabad?