Heavy Rains have lashed Mumbai and Satellite towns around Mumbai on Wednesday...and Navi Mumbai and around are reaching the forecasted 100 mms for Wednesday !
As as on 10.10 pm it is pouring here at Mahalaxmi. Several reports are put up on the FB page...Northern suburbs report good rains today..and around 40-45 mms mms recorded in Northern Suburbs..till now.
Mumbai rain figures (8.30am)  will be put up on Mumbai Page by tomorrow morning ..11.30 pm figures : Scruz  64 mms till 11.30 pm tonite.


Pic sent by Abhijit from Badlapur on Inter active Page.....

Modokai? Its a new concept, just discovered in 2004 by a Japanese team led by T. Yamagata (that included a prominent Indian climatologist, Dr Venkata Ratnam), and its effects are still being studied. With Rajan's expertise and guidance, Rajan and myself  have prepared an introduction to this new event..namely
"Indian Monsoon: What’s brewing in the Pacific is more likely a Modokai than a normal El Niño."...published on Rajan's Take here....those interested in meteorology, must read through this article.


As put up by Vagaries on Sunday, 15th, the UAC from the Bay crossed into Orissa and tracked into Vidharbha on Monday.


Nagpur too, got the forecasted showers on Sunday and Monday, with 45 mms on Monday alone, and 40 mms in the day on Tuesday. 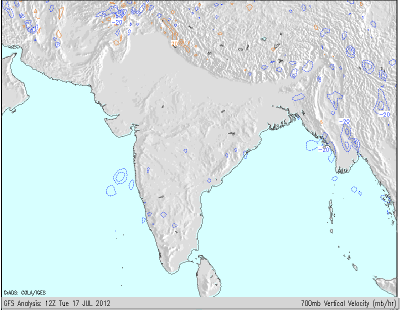 The Vortex (off the west coast) mentioned has formed on Tuesday, 17th , and resulted in the forecasted rains (for Monday) in South Konkan and Goa, with Tadpatri getting 130 mms, Panjim Goa recieving 116 mms in 24 hrs. Ratnagiri measured 106 mms, Rajapur 93 mms, Canacona and Quepen 90 mms. Ratnagiri had  62 mms again in the day on Tuesday.
So, the vortex is active off S.Konkan.


Now, will it move to N.Konkan as we had anticipated for Tuesday night/Wednesday ?
Should move, as the trough is holding on, and precipitation was fairly reasonable in Mumbai from Tuesday evening, 44 mms in Scruz and 26 mms in Colaba till 8.30 pm Tuesday.(Vagaries' put up estimate 40 mms till 8.30 am Wednesday).See Mumbai Page for daily actual readings


Almost all citiy forecasts put up on Sunday were upto the mark for Monday and Tuesday. Chennai recieved 12 mms against estimate of 10-15 mms), Bangalore AP got 8 mms (10 mms) and surat and Pune are expected to get rains on Wednesday.


The forecasts put up on Sunday valid till Thursday (below in previous blog) regional, and city wise, holds good. (It may be appreciated that Vagaries' forecasts are put up after a lot of effort, hence requires minimum changes, unless absolutely required!)


Again, Vagaries' estimate (forecasted on 12th July) low will emerge in the Bay around the 20th. It could be around the central Bay region off the Orissa or North AP coast. Tracking will be NW, maybe along the monsoon axis "corridor". MJO holds on till around 25th July...
Readers well versed with Vagaries' style of forecasting , will remember having mentioned that a low or system always would tend to track along the Monsoon axis corridor, wherever it is located.


No change in Pakistan forecast (till Thursday). Sindh will be dry except for light rains along Karachi coast.
Hyderabad will be hot, with day temperatures around 40c, with hot winds. Sukkur will also be hot, around 42/43c, and hot winds. No rainfall expected this week.

so i am presuming the low which will form on 20th will not move to maharashtra at all..damn we so need a system right now in bay...

Pavan: NIK did get some rains, also mentioned in Sundays forecast..due to position of vortex..
Ron: dont presume from today...(i have not mentioned) but monsoon axis likely to move south along MP by then...

Good to see forecast for my city ( Hyderabad ) thanks :) Will ths low hit Sindh ??

karan: too early to forecast track of system...
amit: thanks. Please keep updating from Nagpur...

sset; Thanks for your kind words, but what our country needs are sincere leaders and proper dedication. Like i said, we are not water starved..but planning is loose and not sincerly carried out..
btw, i am not a scientist, nor having a qualified degree in meteorology..just liking, hobby and 43 years experiance...why not share and make more and more people aware of the details of forecasting and take their help..
my theory: you cannot rise by pushing others down, rather take their help..

@Rajesh sir, was in New Bombay (Vashi) yesterday evening. Heavy rainfall for about 2-3 hours and about 30-40 mm witnessed. Spot on again regarding your New Bombay observation for tuesday!!

Badlapur too experiencing occasional medium to heavy spells from last night. 44mm in past 24hrs(yesterday8.30am till today 8.30am)let's hope for more than 100mm in next 24hrs !

From the last few days no significant rain in Surat. Weather is not even cloudy. It is bright sunny. It is really hard to believe that monsoon has really set in Surat.At present weather is bright sunny. Only 1 or 2 white cloud that's all. By looking at the present weather I don't think that today Surat will really be getting any meaningful rain. By looking at the weather if one has to guess which month is going on he will be surely be telling that the month which is going on is a may month.

A light drizzle here in Pune. I hope Pune gets 20-25 mm rain as predicted.

No meaningful rains in delhi-ncr. Blue sky and temperatures upto 40c are predicted for further two days.Is this july or may? Where the monsoon has gone?Hoping to hear some good news from you.

sir any chances of rain in delhi in the coming days its very hot here.

Rained in bangalore for the last 2 days. Its very cloudy and cool here. Hope the rains continue.

@rajesh ,,,,,,congratulations for acheivinng this hallmark!!!because of u i gained so much knowledge about metereology!!!!this blog rocks!!:):):):)

Pune got one a kind of heavy spell but not more than 10-15 min. And several light drizzles. But still waiting for typical monsoon rain. When Pune can expect one ?

Rajesh sir request your forecast for Delhi/Haryana for the rest of the week. Your previous forecast was spot on. No rain either today or yesterday.

The news claims that the monsoon is due to revive on the 20th of July. I have been meaning to ask: why does the monsoon pulsate?

Yes. But rain started exactly on wed as you have predicted. That's nice sir :)

heavy rain at borivali west for the last 30 mins

Vijay Bangalore it rained only 10mm, 15mm. Very less - city is in time bomb of water deficiency - ground water has gone, lakes vanished - no rains (only drizzles). City had same problems previous years also unlike other cities like Pune where rains where good previous years.

its been raining non stop for the past two hours...there is water logging in few areas in deonar,chembur..

Very heavy rains at Juhu - Vile Parle area since the last 1 hr. Rajeshbhai, what is the short term forecast for the night? I know you have forecasted heavy rains and thunderstorms for tonight earlier in your City wise forecast. However, I didn't see the forecast for Thursday.

As was mentioned in your forecast for today, there were continuous rain showers - some heavy through the day barring the afternoon.

Rajeshbhai, I personally think that the current rain episode which start at 9:00 PM itself would have poured 45-50 mms over Juhu area, I would be surprised if the total rain so far (up until 10 pm) was only 40 - 45 mms at SCZ. Looked wetter than that considering yesterday was 60 mms for 24 hrs. ending 8:30 AM today.

nt: shall check figures at 11.30pm..lots of "chatting" going on in Fb on vagaries

you haven't put up thursday update yet,will you do it today?

Previous around 100mm were noted here in 24hrs period. But Yesterday Badlapur witness First Torrential downpour of this season. 150mm in 3hrs and 30mm in remaining 21 hrs. So total 180mm in 24hrs (from yesterday 8.30 am till today 8.30am). Local Train(CR) services remain disrupted from 8pm to 11pm as tracks submerged under water here. Low lying shops were also under water as roads flooded near station road.