What happened in November ?
Unusual rain prevailed across the central and western parts of the country (besides the normally expected southern regions).
The last 15 days gave a good preview of what can happen with un-symetrical weather patterns. Much of W.Maharashtra/Goa/coastal Karnatak/Rajasthan had 24 hr. soakings measuring between 30-100 mms in places: just to show what a good low can do!
The (un)favourable weather patterns which has been building had held sway, particularly, in the western parts of the country and with the ability, intermittently, to expand its influence to the north-west, but unmatching of what would be considered a typical scenario for November.
At the same time reflecting the ability of the persisting La Nina in the Pacific to influence our local early-season cloud patterns. La Nina offers both strengthened anticyclonic presence and influence in the South Pacific. The inability to pick more surface-layer moisture and proceed inland, where southern India is concerned,is made apparent.
What had been observed was the gradual shift to the west of the rain-belt. One can say that this is not typical sample of “November” weather, as normally in November, the rain pattern builds and extends across the interior of southern states from the eastern coast, reacting and responding to daytime heat creating and sustaining a weak area of low pressure above the interiors of southern India.
Also typically un-November, this development was subject to considerable push from the south west (along the west coast ) by systems from the Arabian Sea, as these battled with the anticyclone in Northern India.
What’s coming? 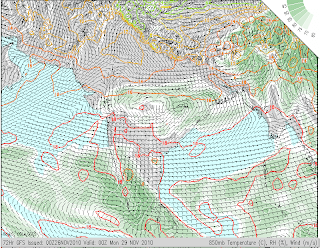 Overall, the favourable weather pattern seems to be returning to normalcy from the weekend.
Early next week there is a tendency for the prevailing pattern to retreat as Northerly to North-Westerly winds are setting in over Northern Sub-Continent. Later on,. by midweek, the outlook improves and colder air could settle over the NW region of the sub-continent.
No W.Ds seen coming to Northern Sub-Continent region in the next 5 days at least.
With no interfereance now from the southerly systems, W.D.s are welcome to return, and usher in the North Indian winter.
In the south, the low has formed in the Gulf of Mannar, and the incursion of moisture as a result will bring in precipitation into T.N. riding on the easterlies.
Check Mumbai Weather Page for Forecast.
By Rajesh at November 26, 2010

Thanks for the heads up...