Posted 5th September:
Heat in Telengana and Parts of A.P...

As a result of the trough, shown in the Vagaries' forecast map on 3rd ...Bangalore Received heavy rains on Friday. Bangalore KIAL recieved 55 mms, Bangalore City received 24 mms, and A.P. 18 mms . Nights were cool at 19c.


Several places in interior Maharashtra also had sharp thunder showers on friday and Saturday. Amongst them, the parched areas of Marathwada got thundershowers, with Aurangabad seeing 19 mms, and a nearby private station at Vadod Bazar (40 kms North of Aurangagabd) seeing 40 mms. Parbhani received 11 mms.

Recalling  estimate of Vagaries on 29th August.."Considering the reasons below, and if the situation continues this way, we may see the South West Monsoon withdrawing from Pakistan, West Rajasthan and Southern Parts of adjoining Punjab (to begin with) around 3rd/4th September"

South West Monsoon has withdrawn from Pakistan and Rajasthan....

Rohit prepares the toppers as on 2nd September 2015.. 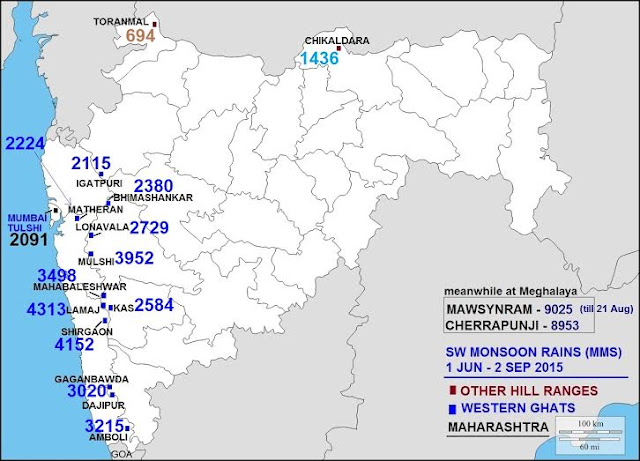 See Mumbai Page for Konkan and Panvel, Badlapur and Borivali Rains from Vagarians.
By Rajesh at September 04, 2015

Sir, when will the SWM withdraw from Delhi-NCR?

Ishan: Your question was answered in yesterday's Blog...Thursday 3rd Sept....I have given an estimate of further withdrawals upto Delhi...please read post below:
This was given yesterday: "As mentioned, Monsoon may withdraw from Pakistan, Rajasthan and southern Punjab by 5/6th September. The further withdrawal will be from rest of Punjab, Kashmir, H.P. and Uttarkhand by 8th/9th September. The Haryana and Delhi region may get withdrawal between 10th and 15th."

Sir if monsoon withdraw from Delhi around 10th sept this will be one of the earliest withdrawal in last 15 year or so. Normal date of withdrawal from delhi is 21st September.

Vagaries forecasts are mostly correct.
-> But when forecasts are correct ,it's business as usual.
X. When weather doesn't follow the forecasts , they are remembered.

The forecast for monsoon withdrawal (given almost a week back) has been spot on.

Vagaries only website that is giving SWM withdrawal dates in 15 days advance.other websites only use words like "in one week, next week " etc.

Its a hot day today in mumbai.

Is there any link between "El Nino" and the West Coast trough formation? Seems like the trough has not been properly formed since somewhere in July. That was the time when El Nino was strengthening.

Actually, come to think of it.. can someone explain the reason for a trough to exist along the west coast during the SWM in the first place?

sorry everestji - pressure gradient is inverse that is - lower on NW coast and higher on SW coast...

but certain associated term difference between low,trough,UAC myself also not clear...

It's amazing how your 'Vagaries North' remains untouched. The last article was on 11th August! Seriously?! Other than daily rainfall data, which, by the way is in a very horrible format, there's nothing! I'm extremely disappointed in the coverage of North India. Kindly buck up. I really like you guys and have been following vagaries from along time now. I hope the message goes through. Cheers.

Thanks sset :). But what you're talking about is an explanation of pressure gradient, not trough itself. A trough would be considered as a line of "dips" in the isobars (or line of "cols" or a "stream bed" to use the equivalent terminology if we think of isobars as contours on a map showing the same height).

From my understanding, gradient is what determines the speed of wind flow. The closer the isobars are to each other, the higher the pressure gradient and the higher the wind velocity. But a trough acts as region where moisture accumulates. Why? Maybe the wind speed decreases as it passes through a trough which helps moisture accumulation, or maybe because air rises in a trough and the associated cooling results in cloud formation... I'm not really sure.

The question is, why is there a trough in the first place along the west coast? I've also noticed the trough frequently gets less pronounced or is replaced by a ridge in central to southern Kerala. Maybe the relative closeness of the east coast from southern Kerala affects the trough formation? I have no idea. I don't know if this has a simple or complicated explanation. Maybe Rajesh sir can explain.

Evewrest: Normally a trough, or a line of wind discontinuity would form or originate from a Low or sometimes from a system. In the Monsoon season, we have a "Heat Low" permanently fixed in the Sindh region. This Hat Low , normally should be located in the Southern region of Sindh, and would have a trough originating from it Southwards. This we call the west coast off shore trough. The strength and depth of the trough would depend on the position of the heat or seasonal low. If the low remains in the North of its normal position, then the off shore trough gets weak. This happens when the axis shifts north, and the heat low moves north, like in a break monsoon condition. (It has happened too often this year).
The off shore trough also can strengthen if a another trough forms in the upper air around the Sindh/Kutch region.This is a breif explanation...and hope your doubt is cleared.

Kartik Sarin: Had a word with Arpit, who is in charge and authors the Vagaries North section...

abizer: Roha had 11 mms on 2nd Sept...and not much after that..I hope that the thunder showers in Konkan after 10th will be benficial for you. Normally they are "hit and Miss" in nature..will put up later...

anoop: Delhi i have said between 10th and 15th...now Monsoon today has withdrawan from Punjab..seeing the dates for Delhi around 12th ...wait for the posting in blog.

Thanks for the compiling the data.
Wanted to know the reason behind the Bay of Bengal branch of SW monsoon being more active than the Arabian Sea branch. Many heavy rainfall stations in Karnataka have not even received half of Mawsynram/Cherrapunji and flooding continues unabated in Brahmaputra region while all 14 districts in Kerala have recorded deficient rainfall, a departure of more than 20% from normal.