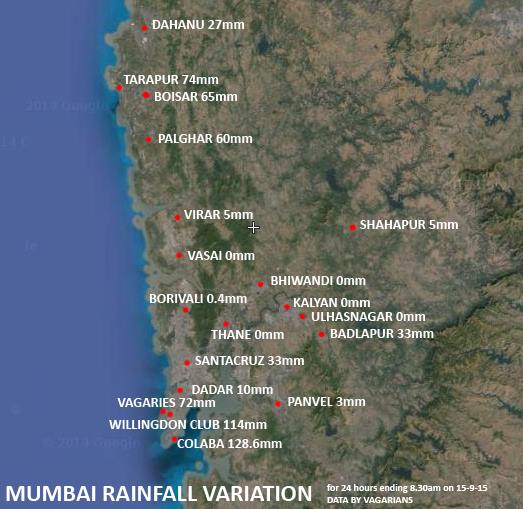 Kolkata also got its share as 51 mms measured by Tuesday morning.

BB-6 has deepened to a well marked Low off the North A.P. /Odisha coast on Monday. Current pressure now has lowered to 1000 mb. System will cross the coast , after lingering in this region off the coast for the next 24 hrs. Heavy Rains on Tuesday in Odisha/Chattisgarh and parts of Vidharbh, East M.P.)

Crossing into land on Wednesday,16th, it will traverse westwards into South Chattisgarh and Vidharbha. Heavy rains in A.P./Telengana, Interior Mah and N.I.Karnataka on Wednesday 16th and Thursday 17th.

The system weakens and tracks through a trough into Interior Maharashtra ( Madhya Mah) .
Crosses and emerges in the Arabian Sea as a Low off the Konkan coast by Friday18th/ Saturday19th. Could be having pressure around 998 mb. System, it seems as on today, may bring rains to Konkan and South Gujarat around Friday 18th, and fizzle out in the South Gujarat (and adjoining regions of Saurashtra) region by 20th.

Kolkata: Thunder showers expected in Kolkata on Tuesday 15th and Wednesday 16th. Around 15 - 20 mms on Wednesday.

With a Thunder shower in the vicinity on Tuesday and Wednesday, Roha and surrounding regions may get heavy increasing showers on Friday and Saturday.
By Rajesh at September 14, 2015

Any chance of rain in sabarkantha...Gujarat

sir. please comment on whether kolkata will have direct benefit of low, depression,.etc for this remaining season

A strong El Niño and record warm Indian Ocean continue
El Niño continues to strengthen. Recent oceanic and atmospheric indicators are at levels not seen since the 1997–98 El Niño. Persistently weak or reversed trade winds and a strongly negative Southern Oscillation Index (SOI), in conjunction with the ongoing warming in the tropical Pacific Ocean, indicate the El Niño is unlikely to end before early 2016.

Climate models indicate sea surface temperatures in the central tropical Pacific are likely to rise further over the next few months, coming close to, or possibly exceeding, monthly values observed during the 1997–98 event. All models suggest the event will peak around the end of the year, followed by rapid weakening heading into autumn 2016. It is too early to accurately determine the likely pattern beyond autumn, but a continued El Niño is considered the least likely outcome at this stage.

Temperature patterns in the Indian Ocean are continuing to have a strong influence on Australian climate. The whole Indian Ocean remains warmer than average with sea surface temperatures in the southern Indian Ocean the highest on record for winter. Some localised cooling near Indonesia means the Indian Ocean Dipole (IOD) index has been above the +0.4 °C threshold for six weeks. If this continues for at least another fortnight, this will be considered a positive IOD event. Most models indicate this is likely.

El Niño is usually associated with below-average winter–spring rainfall over eastern Australia, and a positive IOD typically reinforces this pattern over central and southeast Australia. However, this pattern has been offset in central and some southern areas by the record warm Indian Ocean. Warmth in the Indian Ocean is likely to continue.

Sir,
There was no rain in malad(western suburb)in the morning or during the last night.

Very Heavy rain in early hours in Juhu, I am surprised SCZ only measured 33 mms

Entire Mumbai deficiency will be wiped off with torrential upcoming low !!!

Hope that your words come true..

Remember 4 year ago when Palam received 117 mm rainfall in just one hour.T3 was flooded.

What is the current water levels in the dams supplying water to Mumbai?

please update whether Kolkata will have any direct effect of low, depression for remaining part of monsoon. no meaningful rain since first week of August

abizer: No changes as yet...Roha gets the hit and miss thunder showers on Wed and Thursday...rain increasing from Friday night/Saturday

Pune good gains - deficiency is almost coming to an end.

Sir easterlies has been blowing for last 3 days in Delhi.It seems SWM will not withdraw for atleast 1 week.Rains are also prdicted . Sir then when it will withdraw?

Sir, which area can get heavy rains??

Anoop: Yes, i have also held back monsoon withdrawal due to BB-6. Expecting rains from extended BB-6 clouding on Friday night and Saturday. 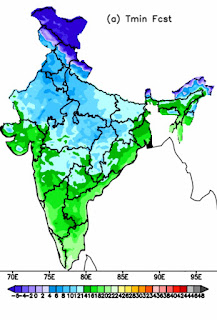