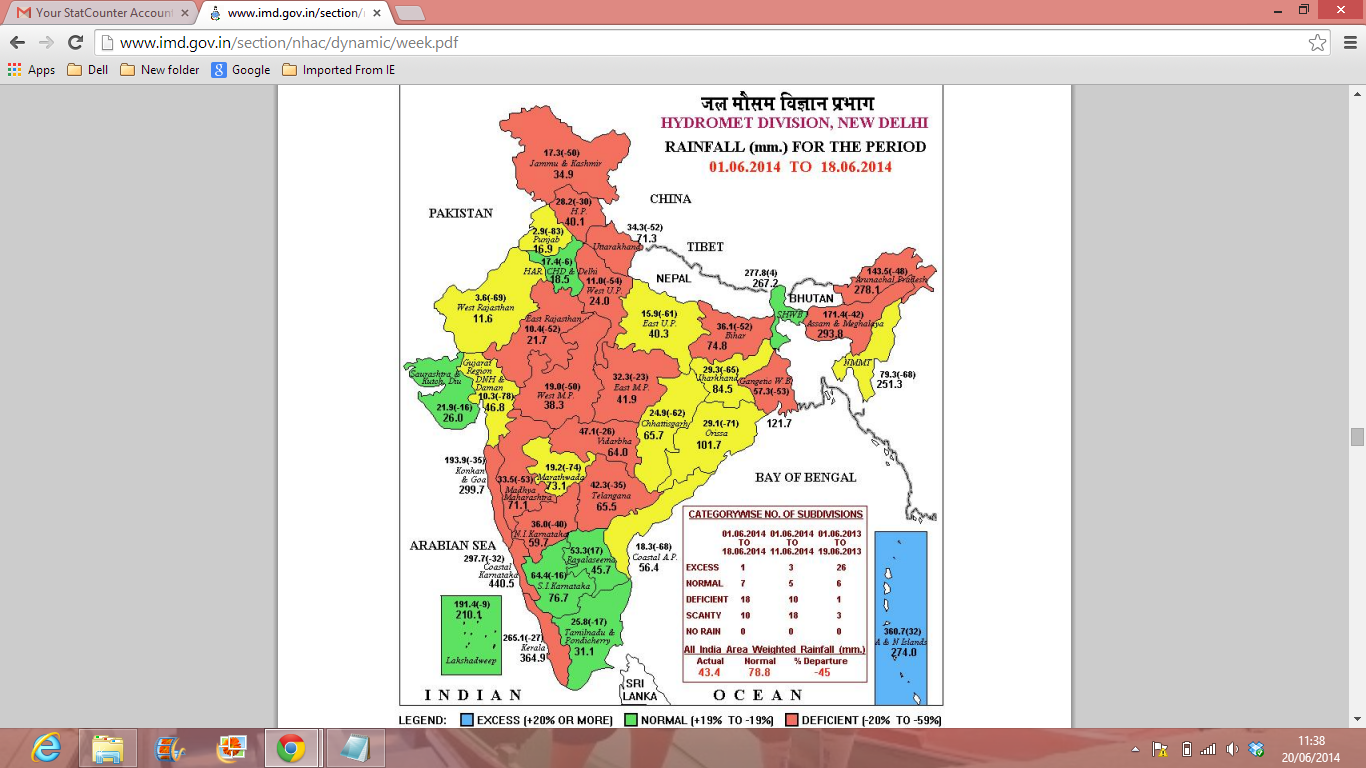 The South West Monsoon has now ( 20th June) covered almost half of India by area. The advance, in phases, was a bit behind schedule, but the movement has been on.
Surprising feature this year is that the Bay branch has dominated over the Arabian Sea Branch. Normally, the Arabian Sea dominates with strong South West Winds bringing copious rains along the West coast.
But, the Cyclone Na Nauk has sucked away all the moisture from the region, and made the normally clouded Arabian Sea almost clear.
Even a upper air vortex which formed in situ over the Arabian Sea initially revived and pulled the Monsoon into South Gujarat.. Though the upper air system did bring good flooding rains (upto 380 mms in Kodinar per day) with Gujarat getting good rains for a couple of days, and dragged the monsoon North.

Since then, its a smiling Eastern branch and a gloomy Western side.

However, persistent WD troughs in upper and mid levels, has prevented the proper formation of the gradient for the Monsoon.
Even the Easterly Jet stream at 100 hpa and 200 hpa levels are yet to establish in the Northern regions, and has moved upto around 22N. The core is over 13N.
The ridge East of the West Coast, and the formation of the Monsoon axis over orth India, has currently reduced the rainfall over Peninsula India.
The Tibetan Anticyclone, linked with the 200 hp jet streams, is yet to establish itself in the normal position.
I would not as yet blame the El Nino effect for this sluggish start. This phenomena has not even formed and established yet.

The impact is felt on farm and crop sowing. As of now, sowing has reduced by 2.1 million hectares in 2014, shows Kharif sowing on 20th June almost 20% less than last year.

I would not go in for the "drought" term yet. The dreaded word is far from reality yet. We see the soil moisture and water table and level indicators (Parameters for Drought) are not alarming and not worsened. Water levels are comparable to last years levels, except in West and South India. Overall the Storage is 24% of the Live Storage Capacity.
If there is no substantial change in rainfall till end July, the dreaded word "drought" may have to looked into or declared.

Initially now, this is not encouraging. But, we hope, and we have to keep hope, that as the Monsoon progresses, more and more regions will get rains to cover the deficit.
We can still hold on to better figures and amounts. What we cannot afford now onwards is a more than 10 days Monsoon Break at this stage.

Next Week, from 22nd June, The rainfall would be restricted to the West Coast  of India (still weak) and NE States, Odisha and Sub Himayan West Bengal. for the next 4/5 days. Some thunder storms and rain from the effect of the Northern trough would be scattered in Delhi and Haryana/Punjab next week.
Thunder storms would be also seen in Pak Punjab.
Further progress into Delhi and Punjab and Pakistan could be delayed to some extent.


Maharashtra : The rainfall in Maharashtra overall is -47% deficient. With Marathwada being the most deficit at -74%. Konkan is at -35%.
The Maharshtra water levelds in dams and reservoirs is at 20% of the live storage capacity. Last year on date it was 24%.
Even the wet spots of Maharshtra, Mahableshwar has totalled only 200 mms, half of its normal rainfall and Amboli has measured only mms.Pune has gathered only 12 mms as yet.
There are a number of station with 0 mms in the interior of the state.


Cannot see any major change for the next 4/5 days for Mumbai..in fact would venture to forecast maybe just 20-22 mms accumulated till Wednesday.
By Rajesh at June 21, 2014

Rajesh sir, so many '?'s are on the mind. that without EL- Nino effect, The monsoon is in pathetic condition, what would have been the case if El - Nino was in full swing.Or is it because of less heating in the north during peak summer time . plenty of WD'S coming in OR is it a new pattern of monsoon One Year OF Bountiful Wet Monsoon followed by Dry Monsoon.Huhhhhhh?-2014 Monsoon a big dissappointment.

I feel, too many WD's in north delayed heating of north sub continent so in resultant seasonal low forming was disturb and that affected gradient of pulling of SWM to mainland as Cross equatorial flows were weak.

And all this was not enough then cyclone "Naunauk" pulled all the moisture away from Maharashtra coast.. So we missed the wet phase of MJO too and all heavy rain which was suppose for Konkan coast from 9 th to 16th june was missed completely due to Naunauk formation..

Monsoon 2014 started with a delayed arrival over the kerala coast and that too as a weak current and then the monster of this season cyclone Nanauk sucked up the moisture of the central arabian sea,thus wasting the rainfall that would have otherwise precipitated on the west Coast above 16 N. North Konkan missed the rains in strong phase of MJO and now with the development of the northern trough and weak MJO in our seas huge deficiency prevails in the districts of north konkan and south konkan too is below normal. Even the usually heavy rains along the western ghats have been missing all along the west coast.Extremely worrying is the situation in interior parts of maharashtra where no signficant rain has fallen yet or is even expected to fall.

But WD have been always present (2013 also had repeated WDs, no heat wave over NW India.. but still had exceptional monsoon currents)...

Mumbai is cloudy totally overcast but no rain!!!!! At all

Yes Abhijit, Forgot to mention, the main culprit, 'Nanauk' responsible behind this entire scenario , That took away all our west coast moisture bearing wind's torrential rain's leaving some few shower's behind, for the west coast.a complete 'knoch' down.

After a dry day , in the evening again Vasai received very heavy rain's for 10 min's . good the duration of rain is also increasing from yesterday.

Arabian sea cyclone strong bob is causing this situation. I think it will take at least 10 days for revival

My reasoning are quite different:
In the absence or nascent stage of ELNINO the behavior of SWM-2014 is peculiar.

[3] However the Tilly-tallying Mascarene High between 70 Deg E to 95 Deg E is determining the cross equatorial flow and hence Bay is always active.

[4] A flutter (frontal movement) in between two segments of High in SIO is felt in Arabian sea as crust and trough {Ridge and trough}.

[5] The land heating is pronounced in the in Eastern side than the NW of India even though the heat low is surfacing in NW.

[7] The formation of Monsoon Depression is weak and gives lesser than NORMAL rainfall.

How true i still remember my City Chandigarh recorded a maximum temperature of 42 c for one day,and rest WD took care

Same situation in karanataka many districts .Still facing 20 to 30 % deficit rainfall. Starting monsoon enter with bang in coastal after one week it's turned as weak . Some interior cities still not see monsoon rains only. Really horrible situations there. Waiting for monsoon revival still waiting only.

rajesh sir we have been recieving periodical rains with strong winds in idukki dist for the past 5 days with an average of 1 inch per day... hope this continues.... hope we recive little rain everyday for the month of june n july... wat are ur predictions sir?

What i feel ,
First of all , Thnx to the WD's the Seasonal Low did not Drop , the Heating did not take Place ,
than , comes Cyclone Na-Nauk ,
Which took away the Clouds of Monsoon from the West coast .
So monsoon , took all the brunt .
Now what i feel is , even though the
Monsoon is up and going , the East wing i.e BOB wing is going to be benefited , as sir had mentioned Bountiful Rains over East india , but the Arabian sea May not see the real good monsoon , as sir mentioned , we should have less Break monsoon days , and than , as per me at the end of the month , we may see , a revival of off shore trough over West coast and another Possible Low Pressure forming in BOB , so Monsoon may buck up nicely from july , "HOPEFULLY" .

What is America's prediction software doing in Pune. Are they not using it at all or their models are faulty ?

This website's predictions have gone haywire, have seen almost all the blogs by Rajesh sir and i am not a weatherman. I have seen Skymet's predictions in detail and they had rightly predicted in 2nd 3rd week of May that monsoon will fail miserable this time. I hope they are wrong...

sir you expect revival after a week or 10 days. will the heavy rain make up the deficiency in konkan and mumbai. what will be the amount of rainfall in june in raigad and mumbai.

Mumbai is not receiving any rain since many days when do we expect heavy showers in mumbai???