As Arpit points out in the Comments, there has been fairly good rain and snow in the North as on Thursday morning.. This is as per the WD forecast put up on Monday for the next 2 days...the first snowfall has occurred in the higher reaches of Kashmir and HP.

Giant Mirrors Bring Winter Sun to Norwegian Village
The centre of the Norwagian town of Rjukan is basking in winter sunshine for the first time ever, thanks to three giant mirrors erected on a mountain top. The town lies in a deep valley and during the six winter months, the surrounding mountain casts a shadow over it, even at noon....more and pics here. 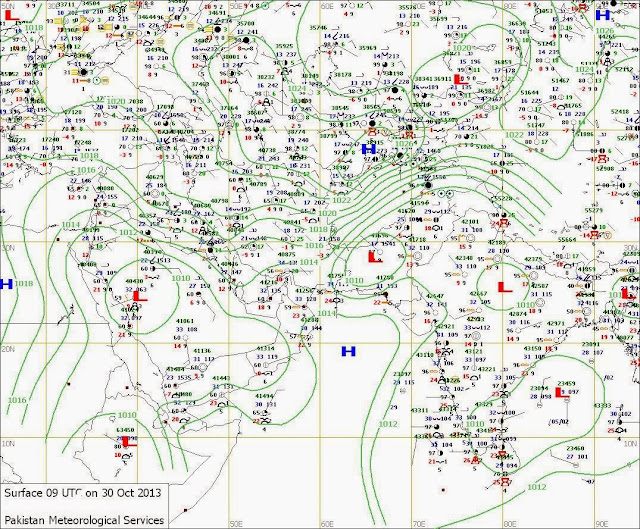 A weak Low ( i term it as a "loop Low") forms in the Bay at approximately 14N and 86E. As mentioned, it is expected that it remain weak and centre will cross the AP coast. Clouding from the Low is expected in the Western quadrant....more on this later.

No sign of NEM ??? If NEM fails - TN will enter into 3rd successive year of drought. First news of drought over Sri Lanka reported. Other hand IMD has released map of SWM 2013 end report - RAJISTHAN, GUJARAT enters into 5th or 6th successive year of excess rains!!! Central India excess rains - MAHA anyway is the winner. Lots of regions over KAR,AP with below-normal. Increase in duration of SWM, lows over GUJRARAT/RAJ/ORISSA prior to NEM has resulted in total damage for NEM currents. Probably in few years NEM itself may become insignificant. Entire SE-India for serious aridity.

Dear you never talk about drought of Bihar and NR

I am from Bangalore...i regularly see this blog

sset: NEM should pick up in November...TN should get its normal around 45 cms ...

Rajesh Kumar: Its always interesting and enjoyable for me to write and mention those regions which have a good readership, or at least some feedback must come from the region. I see no feedback from NE..there are readers there, but response or comments are rare...its an incentive to get comments and feedback to keep one from mentioning of the region...and NE rain figures do appear in the blog on Pradeep's Page.

Thanks for writing and keep on giving your views..always welcome.

That is very good. North East Monsoon is not weakening .. it is doing pretty well. You are a weather enthusiast like the other readers of the blog so i am surprised to see your information is so off the mark.

Here are the NEM rainfall links from IMD.

Rajesh : i will get this updates for NEM regularly.The problem with NEM is it failed last year. So it is all the more important that we need good rains this time.

The combined capacity of all the city reservoir is only 20%.

Chennai had a whopping SWM rains this year with a total of 68 CM double the normal quantity. What is lacking from last year is the bulk rainfall like the 15cm or more. We defintely need this.

Also feature i have been noticing in NEM is that the seasonal first low or a cyclone it is direction is very important. Last year cyclone dissipated into andra after that NEM wind direction never really recovered. Having a similar situation now a WML dissipating over AP.Correct me if i am wrong still looks like a weak NEM.

Annual quota of chennai 150 CMs .This year so far it is close to 95 CM . Hope NEM fullfills the gap.

What's the big deal if' Bangalore' turn's into a desert.enjoy the camel ride there., sand dunes,and arid weather.

SSET you are a stuck tape recorder, who has nothing to speak , instead repeat the same things over n over again.


KASHMIR VALLEY GETS SEASON'S FIRST SNOWFALL
The higher reaches of the Kashmir valley, including Gulmarg ski resort, received the season's first snowfall. The minimum temperature was 4.8 degrees Celsius in Srinagar on Thursday, while it was 1.4 in Pahalgam, minus 0.2 in Gulmarg, 2.0 in Kargil and minus 1.8 degrees Celsius in Leh town of Ladakh region.
Light snowfall was recorded at Zojila on Srinagar-Leh highway.Upper reaches in Zojila, Sonmarg and Baltal had turned white due to fresh snowfall on Wednesday. Snowfall was also received from Sheshnag, Mahaguns, Panjterni and Pisso top on traditional Pahalgam. The upper heights of world famous health and ski resort of Gulmarg, including Khilanmarg, Affarwat and Kongdori also received light to moderate snowfall.

Mercury dips with snow in Himachal
“High hills in Kullu, Kinnaur, Lahaul and Spiti and Chamba districts have been experiencing light snowfall since Thursday morning. Shimla and its nearby areas like Kufri and Narkanda have been experiencing moderate rains.
The Rohtang Pass, just 52 km from Manali, has snowfall. The minimum temperature in the state capital plunged by four degrees. It recorded 7.6 degrees Celsius Thursday, whereas the low on Wednesday was 11.5 degrees.

Kalpa, 250 km from Shimla, and Keylong in Lahaul and Spiti district recorded the night temperature at 1.6 degrees and 2.8 degrees Celsius, respectively

this year's first snowfall has been quite late..better late than never.. :D

North east monsoon in Chennai, during 1st week of November will be very weak with hardly any rains in chennai region may be just a shower.