Super Cyclone Phailin was at it. Aiming at the East Coast and hurtling towards it at 210 kmph..enough to cause major destruction and loss of lives.
Excellent preparedness by authorities and timely warnings from IMD saved major damage and saved loss of lives...IMD did a very good job in accurate predictions and tracking estimates..Kudos !

Neeraj gives some details from Nepal in "comments"....Raining and overcast.
Kathmandu airport received 6 mms rainfall till 8 pm and the day's high was 19.8c. Current temperature at 5 pm 17.0c.
Sunday, as the system mived North into Jharkhand and Bihar, Jamshedpur got 99 mms and Ranchi 43 mms till 5.30 pm (9 hrs).


Rain in Odisha diagram from Rohit: 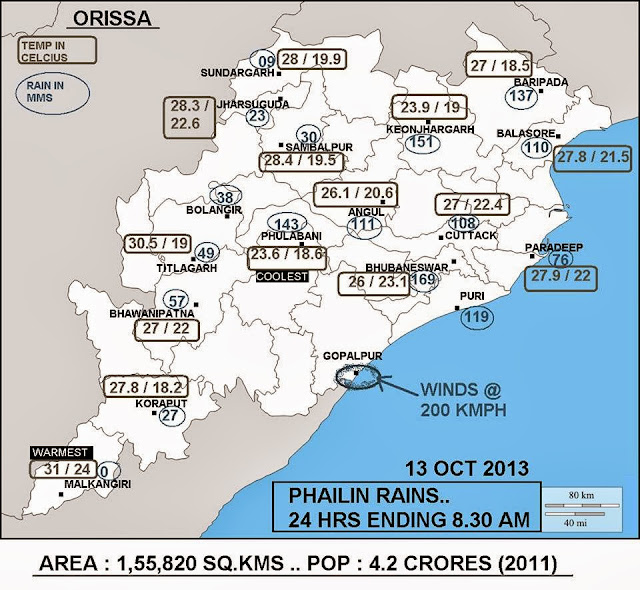 Posted on Sunday Morning at 8.30 am IST

As Cyclone "Phailin" moves Northwards,
Heavy rainfall Warnings for Bihar, Sikkim, North W.Bengal and Central and Eastern Nepal.
Very heavy rains in these regions may precipitate around 100-200 mms in 24 hrs, causing local flooding of regional rivers in Jharkhand and Bihar.

People were saying this storm is worse then katrina in USA but i would say it was nothing compared to katrina, exagerating weather bureaus.

A weak trough expected near North TN coast around 20th which would give the pre-monsoon showers and pull the easterlies..

Rajesh sir..whatz ur view on the NEM onset?

As far 2013 monsoon is concerned, it seems nothing could break GUJARAT 24 hrs extreme rains - recent 7 continuous days of torrential downpours at times 400mm- 300mm in 24 hrs, july valsad rains... and of course cyclone Phailian - also could not break GUJ rains... (we are all sad for poor homeless people...).
Both cyclone Phailian and Typhoon Nari are in same latitude so as typhoon moves west it may seed something again in Bay??????
NEM seems to be in deep trouble-- bad days for southern India..

continuos rain in kathmandu, nepal since 11 o'clock in the morning. and it shows no sign of stopping any time soon. Would 'Nari', crossing vietnam at the moment spawn another cyclone in the bay ? Two cyclones in a row looks very unlikely.

karthik: Will be putting up a note on NEM soon...had estimated 20th Oct as arrival date in NEM Watch -2 put up earlier on Current weather page...so will follow up on that

Arpit: Thanks for sharing, good info

The much maligned IMD found some redemption, its forecast on the storm fared better than most of other forecasters. Kudos to them and also to the various bloggers across the country who have been tracking the storm and providing valuable inputs to everyone concerned.

Phailin dance is OVER of the Weather department.

First time i have seen such swift response to a potential disaster..someone needs to pat imd on their backs for a change...some of my friends in orissa telling me that the power etc have been restored after outage for almost 2 days.But lot of damage in bhubaneswar

sir here in mira road its raining like any thing from morning 4am till now whats the reason for this.is it localised or due to any cyclone again

yes there is a cyclone in the arabian sea

@baboo chachoo i dnt need a answer from u but from rajesh sir his forecast.as i have seen your some comment it seems that this blog is joke for you kind dnt show your jokeing forecast.i need it frm sir

-I's been raining heavily again Mira road again now at 09.00 am ..also confirmed that it's raining in Powai as well..

sir is there any strom in arabian sea because its raining here in mira road frm morning since 4am n still on n off its noderate to heavy.typicaly its looks like rainy season.sir is it only rains here or in whole of mumbai n thane dnt knw sir need your forecast for mumbai for coming days as well as withdrawal date for mumbai soon need your forecast

Overnight rain 25 mms; min temp around 15, overcast, now temp at 10 AM is around 17 C; if it rains for the rest of the day, daytime high won't climb above 20 C or so. It is as if the system has crashed into the foothills of Himalayas, and is going to dump a lot of rain here before dissipating.

Wow. You all are lucky at coastal belt getting daily early morning rain !! Here in Badlapur typical Oct weather with daily fog & clear sky from midnight onward and fog getting denser in early morning hrs ! I pesonally feel that this localized rain that too limited to coastal belt is drifting of clouds from sea due to weak pull effect of Bay cyclone Phailin effect !!

sir its raining cats n dogs in mira road.sir whats the reason behind such heavy rain

As per vagaries map published by Rajesh Sir - we do not see any high pressure areas in northern, central india - probably axis is taking advantage of this..

Actual Oct trend should be drifting of
clouds from East to West (i.e from
land to sea ) evening TS !! But from BB
13 onward west to east trend is
continuing till now !! So only coastal places
benefiting almost daily !!

here also in malad we received good showers between 10 - 11am.

Parts of Mumbai are getting thunder showers since the last 2/3 days. From South Mumbai on Sunday to Northern parts on Monday. The reason is an upper air trough running east west from coast to 60E in the Arabian Sea off maharashtra coast.
Its seasonal for the withdrawal time.such a trough initiates inland and coastal thunder showers, as the axis starts shifting towards the South and enriches the sea trough.
Likely for 2 more days as axis moves down and diminishes the off shore trough
Details on blog tonite..

Can hear a lot of thunder going on in deonar, one particularly loud at 12 noon..mild showers too

What is wrong with the Mumbai Doppler Radar? Amazing to see that the Radar is down for more than a week now. Wonder what are they testing? Is there a way to ping the local IMD?

Thanks Rajesh sir..btw, im not Karthik :-)

I prefer to answer queries to those who diretly give their names, as it becomes easy to converse with you on personal levels..those who have not yet revealed their names please be free and open to discussions on one to one basis...otherwise replying to those with "concealed names" will not be convenient.


Vagaries is a group of faithful and enthusiastic weather and nature lovers. All are open to their views and opinions. Let us recpect that and maintain the ethic of Vagaries..Thank You

Rajesh Sir...i think i have already shared my name..i believe you have also joined the bandwagon (along with ppl from some other blog) in giving importance to screen names and especially against me..ppl posting with some "human" names doesn't mean they are revelaing their original names and u too do not care about investigating them..it doesn't matter much..anyway, i would continue to post with this name everywhere..and thanks for your replies till now.