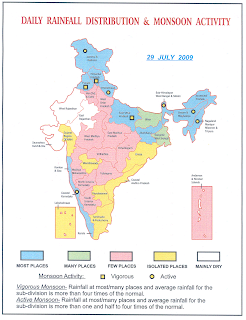 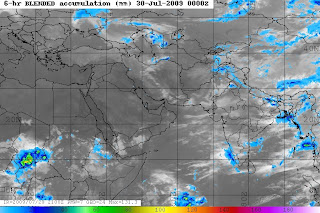 Rain-deficient Bihar and the North-East region received very heavy rainfall ( Cherrapunji gets 45 cms in 24hrs.) as the seasonal monsoon axis has aligned itself in position for enhanced rain in the foot hills of Himalayas. The actual rainfall map of the past 24hrs. shows very little or no rain in the rest of the sub-continent. Even the IMD daily rain map of India, attached here, shows the monsoon activity only along the foothills of the northern regions.
On the 30th,the axis of monsoon trough at mean sea level passes through along the foothills of Himalaya upto Raxaul and then Jamui, Asansol, Kolkata and thence southeastwards to eastcentral Bay of Bengal, a perfect position for the above pattern, and a "break monsoon " condition for the rest of the regions of the sub-continent.

The NCMRWF has projected its outlook for the ‘low’ by the 3rd. of August, with prospects of intensification.
However, international models do not indicate any major increase in rainfall over central India, that could signal a revival of the monsoon, even after the low forms,and crosses the coast.

Forecasting ahead, i would say, "status Quo" conditions, till atleast the 3rd. Similar rainfall pattern in India, as shown in the coloured rain map,and maybe with current rains along the northern foothills, shifting eastwards day by day.

Weak monsoon conditions to continue till the 3rd. at least.

For interior Maharashtra and Gujarat, the rains will remain weak and marathwada and saurashtra region may remain dry for the next few days. For the south, we may see rains increasing a bit along the coast,and shifting slightly inland, after Sunday, as the trough along the west coast may extend towards Kerala. For interoir Karnataka, no major development next few days.

Mumbai, weekend will be less wet, with less than 10 mm /day. Till Monday, Mumbai will be mostly bright, with stray passing showers in parts of the city. At 31c, and humidity at 80%, it will feel hot, as real feel temperature may be around 35c.. Punctuated by long sunny intervals, will make it more uncomfortable.